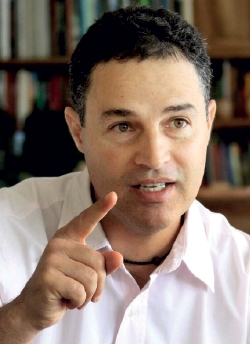 Share on:
What examples can Medellí­n set for other countries in terms of security and innovation? In the past Medellí­n was known internationally as the most dangerous city in the world. We […]

What examples can Medellí­n set for other countries in terms of security and innovation?

In the past Medellí­n was known internationally as the most dangerous city in the world. We have changed that, and today the city has become the most innovative and one of the most resilient cities in the world. Medellí­n has achieved such unique and incredible changes thanks to investment in education and innovative urban developments strongly linked to mobility in public spaces. Our society was highly unequal, but with such investment, we have achieved an equal urban development and higher levels of coexistence. Just two decades ago the city had a homicide rate of 380 people for every 100,000 inhabitants. By 1H2014, the rate had dropped to 28. All achievements in terms of security have been possible thanks to the joint efforts of all authorities, security bodies, and other agencies. I think Medellí­n represents a strong example of how to invest in education to create future opportunities for the youth, as well as a sense of urban equality through investment in infrastructure.

How has Medellí­n managed to be awarded most innovative city in the world?

The reasons why we were awarded such distinction reside in the innovation we have introduced in our urban development projects. Perhaps the design of these developments is not innovative in itself, but their innovation has to do with, for example, the different usage the city has given to them. For example, the cable railway’s innovation lies in how Medellí­n has used it as mass transportation, and today there are many cities copying our system. The same can be said about the escalators set around the city to reach mountainous and less accessible areas in the city. We applied innovation to solve the daily problems that our society faced.

What are your housing priorities within the 2012-2015 Urban Development Plan of your administration?

The urban development plan has a record budget in the history of our city of $10 billion—12% of this represent operating expenses, whereas the rest is pure investment. The plan foresees investment in education, infrastructure, environment, and housing, among others. In fact, education and health are the two spheres receiving the highest proportion of this budget. Additionally, we have increased traditional investments in mega infrastructure projects, which includes the construction of several parks that will combine to form an 18-kilometer long natural park along the Medellí­n River. We will be developing this ambitious project through a combination of public-private partnerships (PPPs). We have also prioritized the development of the Metropolitan Green Belt, a similar project, but one that is located around the outskirts of the city, as we aim to limit the growth of the city through sustainable projects. These two megaprojects run in parallel with our commitment to our housing project; we aim to provide over 100,400 units through a project that incorporates new housing units, as well as the renovation, legalization, and regularization of existing housing units. In this context, Medellí­n has capitalized on the National Government investment in the social interest housing project; 10% of the 100,000 housing projects that form part of the National Government’s plans were built in Medellí­n.

What kind of support is your government providing for the industrial expansion of the Medellí­n area?

We know that in order to further attract industrial investment from national and foreign investors, we must continue working to increase security levels. We must also support their activity through urban transportation platforms to make their business more competitive. For example, we are set up to operate the first tram network in Colombia. This is an innovative project that will run on pneumatics rather than steel wheels. We also believe that it is essential to continue investing in human resources; people from Medellí­n are known for their affable and entrepreneurial character, and we need to support that with education and training. We know we can provide this basic support to domestic and foreign investors; however, we are also implementing specific strategies. For example, we have set up the Medellí­nnovation District, a kind of Silicon Valley that will develop solutions for health, energy, and ICT. Companies establishing operations in this district will enjoy tax incentives and will be able to benefit from an innovative, creative, and knowledge-focused environment.

What are some of the landmark achievements of your administration in terms of healthcare, and some of the challenges facing this sector?

We have invested heavily in the improvement and expansion of health infrastructure, and are currently building five new health centers and four new hospitals. Additionally, we are setting up the first pedagogic health institution to work exclusively on prevention, as well as the first integral center to provide support to women and families, as well as a children’s hospital. We saw the lowest rates for maternal mortality that we have ever seen in Medellí­n in 2013.

What is the municipality’s strategy to boost Medellí­n’s role within the education sphere?

We need to invest to improve the quality of education at both the primary and secondary levels. Our biggest challenge is to build bridges between secondary education and technical and higher education. We have plans to build two new university campuses, each one with a capacity of 10,000 students.