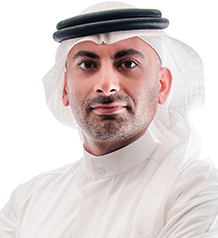 Khaled Al-Huraimel is Group CEO of Bee’ah, which under his leadership operates at the forefront of the environmental industry. Before joining Bee’ah, he was the founding-CEO of Arabian Global Investments, a UAE-based investments company involved in emerging real estate opportunities. In 2005, he became COO of Dubai Waterfront at Nakheel, a large-scale project in Dubai twice the size of Hong Kong, where he was responsible for launching the Madinat Al Arab development. He holds a degree in marketing from King Fahd University and an MBA from the University of Bradford.

Share on:
TBY talks to Khaled Al-Huraimel, Group CEO of Bee'ah, on achievements thus far, working together with the public sector, and the demand for environmentally friendly projects in Sharjah.

How would you review your operations over the past year and what achievements stand out?

Last year was a great year for Bee’ah and we are confident that 2016 will be even better. In 2015, we continued to lead the region in the environmental waste management sector and expanded outside of Sharjah for the first time. These included many major contracts in Dubai, such as the Burj Khalifa, Dubai World Trade Centre, and TECOM in Dubai Media City. We also started managing Dubai Marina Mall and remain contenders for numerous large international contracts that are still in the pipeline. As a result of Bee’ah’s efforts, since forming in 2007 Sharjah has the highest rate of diversion of waste from landfills in the Middle East, and we are now expanding our scope beyond waste management toward becoming an environmental contracting company, which has opened up new areas for R&D such as monitoring and measuring air quality. Bee’ah already has air quality stations in place, and within a few months we will have seven stations.

What is the current appetite for the development of waste energy projects in the UAE?

Across the UAE, the strategic direction of both the federal and individual Emirates’ governments is to have less dependence on oil and to diversify the national and domestic economies. The UAE federal government is working toward these solutions, with Sharjah playing a pivotal part in driving ahead and supporting such initiatives. At Bee’ah, we are always exploring new and dynamic forms of renewable energy and, from our side, we have already set in motion plans for recyclable waste plants and solar energy farms, as the initial focus. In addition, we have a waste-to-energy project that we will start building in Sharjah this year, in collaboration with Abu Dhabi’s clean energy giant, Masdar, and the UK’s Chinook Sciences. We signed the partnership agreement with Masdar, in January, and this will result in both companies working together to develop more waste-to-energy projects across the UAE. We are pleased to have made such a strong partnership with such a likeminded organization as Masdar, and we look forward to working with it on many joint projects of mutual interest.

How are Bee’ah and the Environmental Authority promoting recycling habits among Sharjah’s citizens?

As a public private partnership company, we do all of the awareness programs for the general public and schools ourselves. Our school programs operate in both public and private institutions and they are part of an ongoing initiative. With the Ministry of Environment we are also looking to become more involved in taking the message beyond Sharjah and out across the UAE. We were honored to receive the newly appointed minister for a visit recently. Bee’ah has also committed to many research programs, as we believe that as a private company dedicated to conservation, we need to give back to the community and encourage further research and training.

How would you assess the current level of awareness, among the Sharjah population, in terms of using clean and renewable energy?

Regionally, people recognize that Sharjah has already done a lot in promoting and developing technologies and practices in the area of renewable energy. Without being boastful, we are now considered one of the cleanest cities in the Middle East; however, we still have a long way to go before achieving the ambitious goals we have set out. For example, while we are still recovering waste from building facilities or demolitions, to take it one step further we need to effectively recycle that material. Right now the only product that we are recycling fully is tires, as well as materials made of plastic and aluminum. In 2016, we will start recycling the plastics ourselves, which we envisage will trigger the development of a plastics hub, in Sharjah.