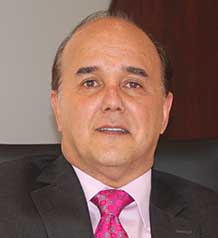 Prior to joining the Norton Rose Fulbright Bogotá office, Mauricio Zagarra worked both in Colombia and the Andean Region as legal vice-president, general secretary, and associate general counsel for Latin America for several multinational corporations such as IBM (Colombia, Andean Region, and Latin America), Bellsouth International, and Telefonica Moviles-Movistar. He also worked as an international associate with a prominent law firm in the US and as a partner and of counsel with some of the largest law firms in Colombia. His practice areas are focused on regulatory, corporate, commercial, transactional, and telecommunications/IT. He is well acquainted with the legal systems of several countries in Latin America and has an extended network of business and legal contacts throughout the region. He is an arbitrator on the list of the Centre for Arbitration and Conciliation of the Bogotá Chamber of Commerce in corporate and IT/telecommunications law.

Share on:
"Colombia has a regulatory framework that favors foreign investment."

How would you describe the regulatory framework for investment in Colombia?

Colombia has a regulatory framework that favors foreign investment. As you know, Colombia has been an investment destination for some time now. Past and current governments have been very interested in fostering foreign investment and have tried to cut the red tape and help foreign investors in their incorporation process and operations in the country. That has been achieved to a certain extent, but it is a work in progress. However, there have been recent modifications to the tax regime that, in the view of many foreign investors, may affect their future investments in Colombia. This message has been conveyed to the government by several key players and stakeholders, and there is something to be done in that respect. Due to this scenario and international prices of certain commodities, our clients and foreign investors are now cautious about their investments in Colombia, waiting to see how the situation evolves, both tax-wise compared to other Latin American countries and also in terms of the ongoing peace talks with FARC guerillas in Cuba. Under the current global and local circumstances, being cautious makes sense.

How would the peace process affect foreign investment in Colombia?

It would favor foreign investment, of course. Figures released by the National Planning Department say that foreign investment will triple in the post-conflict decade, that is, 2016 to 2026. Many Colombians agree with the government’s position that reaching an agreement in the peace process is a critical factor in boosting foreign investment in the future. Once the agreements are signed in Cuba, Colombian citizens will have the opportunity to decide if those agreements are to be ratified and endorsed and, therefore, if Colombia will finally end its internal 50-year long conflict. It is something to be optimistic about and many foreign governments, including the US, Germany, and the EU have already committed resources to the post-conflict effort, which is very good sign of international support. At the same time, we are all aware of the many challenges the post-conflict era will present and resources have to be managed carefully and well. It is not just a matter of signing the peace document; that’s just the starting point for something to come that entails many issues and challenges and requires an important investment.

What needs to be done to improve FDI into the oil and mining sectors?

Agencies in both the oil and mining sectors are well aware of the many issues involved. Both sectors are very affected due to international prices. Mining in Colombia has been affected for several years now, and the mining agency has to issue and clarify regulations and the environmental licensing processes for the mining companies that are already present in Colombia, and hopefully attract new investors in the mining sector. In the oil and gas sector, the ANH, is considering a new round of bids in order to attract foreign investment. Previous rounds were not as successful as the government expected, so for this new round to be successful, the ANH has to take into consideration the many messages foreign investors and major players have conveyed in the past. If the government wants to attract those major players back to Colombia, conditions have to be well defined and attractive.

How do you evaluate legal certainty and the rule of law in Colombia?

Legal certainty and rule of law are alive and well in Colombia. We have some of the highest standards in Latin America in this respect. Justice, although slow in countries like ours, is still reliable especially at the higher level. Laws are enforced and, if they are changed, they change with an eye on the future, not retroactively. That provides legal certainty. In the past, foreign companies have entered into legal stability agreements with the government, which shows the clear intention to promote stability and the rule of law. Furthermore, an arbitration procedure can be handled independently and without the interference or influence of the government, other sectors, or third parties. Colombia has adopted a flexible and internationally derived regulation on international arbitration that we believe meets international criteria. In 2012, though not entirely derived from UNCITRAL’s Model Law on International Commercial Arbitration (Model Law), Colombia’s Arbitration Law bears several similarities with the Model Law when dealing with international arbitration. However, we understand that foreign investors may have concerns related to corruption, fairness, and neutrality toward the parties involved. Although Colombia may still be perceived abroad as a country with relatively high indexes of corruption (ranked 94 in the 2014 Transparency International Corruption Perception Index), the Anti-corruption Statute is frequently enforced and there are many politicians, government officers, and entrepreneurs behind bars for corruption-related crimes. It is also important to clarify that arbitrators, although subject to the standards and duties of a judicial agent, are neither employees nor linked whatsoever to the judicial or public branches. This means that a person exercising the role of an arbitrator has to follow extremely high standards of ethics, professional conduct, and diligence as those that are imposed to a Supreme Court magistrate. It is also relevant to mention that Colombia has signed the New York Convention on the Recognition and Enforcement of Foreign Arbitral Awards (New York Convention).

What differentiates Norton Rose Fulbright from its competitors?

Norton Rose Fulbright was the first truly international law firm to establish an office in Colombia as a result of its global strategy. We clearly seek to differentiate ourselves with our great knowledge and expertise in the industries and sectors in which our clients operate. Knowing how our clients’ businesses work and understanding what drives their industries is fundamental to us. Our lawyers share industry knowledge and sector expertise across borders, which enables us to support our clients anywhere in the world. We focus on the six industry sectors where we have the strongest national and international, cross-practice expertise, including financial institutions, energy and infrastructure, mining and commodities, transport, technology and innovation, and life sciences and healthcare. Our reputation has been earned through delivering commercially oriented, leading-edge legal advice to a broad range of clients in this challenging and evolving market. Our commitment to exemplary service and reputation for clear, honest judgment helps our clients achieve results. We not only want to engage and retain the best legal talent in each country we operate but we organize our lawyers according to headlights and industries, so they develop great expertise in the business and operations of their clients. Another difference is our international reach and scope. Not only do we advise clients coming into Colombia or other countries in Latin America, we also offer guidance to clients who are expanding abroad, via our 53 offices worldwide. At the same time, our standards as an international law firm are quite strict and not always met by other law firms in matters such as conflicts and ethical guidelines, partner contact with the client at all times, insurance coverage, and 24/7 responsiveness. We make sure we always meet the most demanding international standards.

What are the priorities for Norton Rose Fulbright in Colombia right now?

We continuously hold conversations with other members of the legal community and key players in the Colombian market about achieving sustainable growth while maintaining our current ratios of profitability and success. At Norton Rose Fulbright, we always want to hire and retain the best legal talent there is in Colombia and the region. We want to have the same quality and compare ourselves to other law firms not just in Colombia or Latin America but anywhere in the world. We are a London-based global law firm, and that is our standard. We have to continue to provide legal services of worldwide quality.

What is your outlook on FDI in Colombia in 2016?

I am somewhat optimistic because of the many projects and huge investment in the infrastructure sector. This will greatly help the Colombian economy and FDI in this sector will continue to grow. However, it is justified to be somewhat concerned with many macro economic forecasts for 2016. Next year will hopefully bring a concrete result in the peace talks in Cuba due to the agreed deadline for the peace process, which has taken more time than originally expected and generated uncertainty to foreign investors and our clients for the past three years. At the same time, the government has also discussed and analyzed tax impacts on foreign investment and they seem to be willing to explore possibilities to modify the current tax structure. This will not happen in the short term due to the great pressure of international oil prices on our economy, but the finance officers of the administration know this has to be addressed at some point. Overall FDI has been impacted but it has increased in some specific sectors, and that is also a good sign. Not only Colombia has been affected by the decrease in FDI in the oil and gas and mining sectors; it is a global situation. Colombia’s annual growth or GDP will not be as high as some would like it to be, but recent forecasts show it will continue to grow at a rate of around 3%.