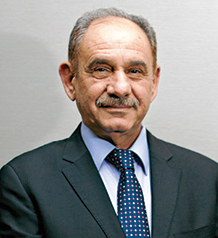 Since 2010, HE Dr. Saleh al-Mutlaq has been Deputy Prime Minister of Iraq for Reconstruction Services and also heads the Ministerial Committee for Reconstruction and Services and the Committee on Education Strategy. He is one of the most senior figures from Iraq’s Sunni minority in Prime Minister Haider Al Abadi’s Shiite-led government. Previously, he was the Secretary General of the Democratic Party in 2003. After graduating from the University of Baghdad in 1968, he received his PhD from the University of Aberdeen in Scotland 1974.

Share on:
TBY talks to HE Dr. Saleh al-Mutlaq, Deputy Prime Minister of Iraq, on the development of bilateral relations, strengthening that relationship, and security in the region.

How would you characterize the bilateral relationship between Iraq and the UAE?

The relationship between Iraq and the UAE extends to the first days of Declaration of the Independence and Union of the UAE in 1971, as this announcement forms the emergence of a young state under the name of the “United Arab Emirates” and under the banner of the late HH Sheikh Zayed bin Sultan Al Nahyan. Since then, this bilateral relationship has formed into a comfortable and positive development for the Iraqi people. Iraqis look at the Emiratis as brothers and stand alongside them on issues, conflicts, and problems that have been raised about their national sovereignty over some UAE islands. These fraternal efforts represent a good omen for both the Iraqi and the UAE peoples. In addition, our Emirati brothers were always first to support the Iraqi people in a lot of problems and tribulations we faced. I would also like to emphasize that despite some politically motivated recklessness that has tried to disturb the relationship between the two countries; these external actors cannot diminish the relationship between our two countries. All in all, the UAE and Iraq is a fraternal relationship based on mutual respect and historical linkages that encourages us to classify this relationship as first class.

What are the key areas of opportunity to further strengthen this relationship?

There is no doubt that the economic aspect of trade and investment could be considered as the first opportunity to stimulate, promote, and develop this relationship. We recognize the importance in solidifying a positive and mutually beneficial relationship between the two countries as they both represent economic importance to the region as a whole. In addition to this, Iraq possesses not only substantial material wealth; however, a tremendous amount of human capital. Our two governments concluded many decades ago that the reconstruction of Iraq begins in the fields of housing and infrastructure. There are other opportunities, which complement the exchange of scientific and cultural experiences and areas of sport and tourism, art and so on.

How do you see the UAE playing a role in the security of the region?

Actually, the UAE has attained good cumulative expertise in security fields, which helps to open other prospects through which it can perform its duties at the regional level. Similarly, the UAE also plays a role in the diplomatic framework regarding the security of this region due to the considerable amount of tension and presence of different threats. On an international level, the UAE is an active participant in the international coalition against terrorism and extremism. These factors have enabled the UAE to play an important security role for deployment of stability and limit the threat of terrorism and extremism.

What role does a unified Iraq play in developing long-term and lasting peace in the Middle East?

There is no doubt that a unified and safe Iraq reflects a positive impact on the region as a whole. Conversely, there are risks that threaten the entire region as a result of the situation happening in Iraq recently. We are confident that today Iraq is fighting terrorism on behalf of the nation and for all humanity. In light of this, it is necessary to unite the Arab and international efforts to provide an appropriate support for Iraq to flush out this terrorism. By supporting Iraq’s security and military institutions as well as strengthening the bonds of brotherhood among its people, Iraq will be able to establish its vital role and come back as a positive and basic player in the security of the region.