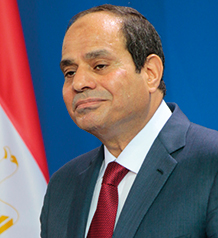 Abdel Fattah el-Sisi graduated from the Egyptian Military Academy in 1977 and served in the infantry before becoming the commander of Egypt’s northern military region. Following an uprising in 2011, el-Sisi was appointed to the post of Director of Military Intelligence and was also the youngest member of the Supreme Council of the Armed Forces, a body of senior military officers who governed Egypt after Mubarak’s departure. el-Sisi was elevated to the positions of Defense Minister and Commander of the Armed Forces in August 2012, and after the revolution of summer 2013, el-Sisi won the presidency with 93% of the vote and was sworn into office as President of Egypt on June 8, 2014.

Share on:
TBY talks to Abdel Fattah el-Sisi, President of Egypt, on the strength of social and economic ties between Egypt and the UAE.

In recent years, the UAE has delivered nearly half of the foreign aid budget for developing projects in Egypt. How crucial has UAE aid been in stabilizing Egypt and promoting development?

Egypt and the UAE have always shared special and close relations at both official and popular levels. Today, ties between the two Arab nations are developing on all fronts at an unprecedented rate and are considered a model upon which inter-Arab relations should be styled. During recent years, the UAE has become one of Egypt’s most important strategic allies as well as a key development partner. Following the revolution on June 30, 2013, a framework agreement was signed between the two countries by virtue of which the UAE supported the implementation of development projects in vital sectors including energy, housing, education, healthcare, transportation, infrastructure, and food security, in addition to industrial staff training and strategic studies. Talks are also underway with the UAE to finance projects implemented under the Sinai Peninsula Development Project. The UAE’s support of Egypt’s development plans has been useful, and we look forward to continued collaboration and witnessing the implementation of a number of megaprojects aimed at boosting the economy and fostering Egypt’s stability.

The new Suez Canal opened in 2015. Has Egypt seen interest from the UAE to develop special economic zones near the canal, like Sharjah, which has developed efficient business-friendly centers for industry?

The Suez Canal corridor is one of the most prominent projects in Egypt. In November 2015, we launched the first phase of the Suez Canal Area Development Project. The project envisages the promotion of special economic zones and industrial areas. Work is now underway on the infrastructure in the area to turn it into an international investment destination, a global logistics hub, and an industrial center for the new Egypt. As an integral part of this vision, the government is currently reviewing the special economic zones law to improve the tax and investment incentives offered to investors in these zones. The UAE was at the forefront of countries showing interest in this ambitious project, given its commitment to supporting Egypt’s comprehensive economic and social development process as well as its successful experience in managing special economic zones. The Emirati interest in the Suez Canal project started early in Phase I, where Abu Dhabi’s National Marine Dredging Company was instrumental in delivering the New Suez Canal on time, leading a consortium of four of the world’s largest dredging contractors. Momentum has now switched to Phase II of the project, the new special economic zones, which offer a huge opportunity for the UAE, particularly the private sector, to set up industrial parks and logistics hub. I met with several groups of Emirati businessmen and investors over past years and discussed with them the diverse business and investment opportunities offered by Egypt as well as steps and measures undertaken by the government to offer an environment conducive to more investment and to eliminate bureaucratic impediments. They showed great interest and commitment to increasing their investments in Egypt, and we are currently cooperating with them in order to translate this interest into tangible actions and projects that would be of mutual benefit for both sides.

How do you envision future relations between Egypt and the UAE?

At the bilateral level, Egypt and the UAE will continue to strengthen the political, economic, cultural, and social ties that have been established since the UAE’s independence in 1971. There is a large Egyptian expatriate community in the UAE, which has positively contributed to its development and modernization process during the past decades, and many Emiratis have a strong affinity to Egypt, where they have received their education at Egyptian universities and enjoyed some of Egypt’s most attractive tourist destinations. The political leadership in both countries is interested in seeing these relations further prosper and flourish to serve their mutual and regional interests.