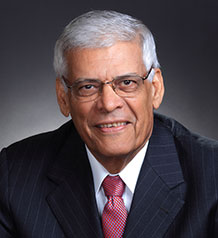 HE Abdalla S. El-Badri has been OPEC Secretary General since 2007. He became Chairman of the Libyan National Oil Company in 1983, before being made Minister of Petroleum in 1990. He was appointed Minister of Energy, Oil and Electricity in 1993 and Deputy Prime Minister in 2004, before returning to chair the Libyan NOC until 2006. In 2010, Forbes named him on its list of The World’s Most Powerful People, and in 2014 he was on the Gulf Business list of the Top 100 Powerful Arabs. In 2013 he was awarded The Abdullah Bin Hamad Al-Attiyah International Energy Award for the Lifetime Achievement for the Contribution to the Advancement of OPEC.

Share on:
"Iran has tremendous opportunities for cooperation between its companies and multinationals."

Iran is a founding member OPEC and one of its largest producers. What role has the country played in the history of the organization and what role does it play today?

Iran was one of the five founding members of OPEC back in 1960. The country has hosted several OPEC Ministerial Conferences and has held the OPEC Conference Presidency on a number of occasions. It also afforded the organization its first Secretary General back in the 1961, and many of its people have performed important and productive roles at the OPEC Secretariat. Over the years, it has contributed much to the organization. Iran continues to play an active and important role today. We respect and appreciate its support and input. And this goes for all member countries: each of them has a voice and their views are important to the organization’s present and future.

Since the JCPOA agreement, Iran has boosted its oil exports and increased production. How important are Iran’s supplies to the global oil market?

Iran’s full return to the oil market is a welcome one. Iran is an important country, a founding member of OPEC, and a key participant in the global oil market. It has vast hydrocarbons potential, excellent manpower, and its production and exports remain integral to the future stability of the oil market. The world will need more oil in the future. Oil demand is expected to be close to 110 million barrels a day by 2040, an increase of around 17 million barrels a day from today. There is no doubt that Iran will play an important role in helping ensure this demand is met.

What is your opinion on further cooperation between multinationals and local companies to develop projects within Iran?

With the third-largest oil reserves and the second-largest proven gas reserves in the world, Iran has tremendous opportunities for cooperation between its companies and multinationals. Currently, there is clearly significant interest from a wide range of international companies. How this evolves is a matter for the Iranian government and the Oil Ministry, but there is no doubt that its long-term development will depend on greater cooperation with international oil companies. I hope they are able to reach an agreement that satisfies all parties—one that enables Iran to expand its production and exports.

How do you see the oil market outlook for the rest of 2016?

There are signs that supply and demand are moving into balance as we head into the second half of 2016. Oil demand remains fairly healthy at 1.2 million barrels a day; economic growth is set for 3.1% in 2016, higher than last year, and non-OPEC supply is expected to contract by 740,000 barrels a day. This means the overall average requirement for OPEC crude in 2016 is expected to be 31.5 million barrels a day, an increase of 1.8 million barrels a day compared to 2015. However, it is important to note that stock levels remain high. The five-year average for OECD commercial stocks in May 2016 is a surplus of around 350 million barrels. It is vital that we see this figure on a downward trend. We hope to see a more stable and balanced market by the end of the year. This will be beneficial to both producers and consumers.

Over the past few years we have seen significant supplies coming from non-OPEC countries, although this year non-OPEC supply is expected to contract. Where do you anticipate most of the long-term supply growth to come from?

In the 2013-2015 period, non-OPEC production increased by over 5 million barrels a day, which was a major factor in supply outstripping demand. And yes, as I mentioned in the previous question, this year there is expected to be a contraction in non-OPEC supply, given that a lot of the recent non-OPEC increase has been in high-cost production. In the long term, non-OPEC liquids growth is anticipated to be limited, with an increase of around 3 million barrels a day between 2015 and 2035, before then declining slightly to 2040. The main contributor to liquids supply growth after 2020 is OPEC. In the 20-year period between 2020 and 2040, OPEC crude is expected to expand by 10 million barrels a day to a level over 40 million barrels a day. By then, the share of OPEC crude in total liquids supply is projected to increase to 37%, compared to current levels of around 33%.

What is OPEC’s view on the Paris Agreement reached at the Paris Climate Conference (COP21) in December 2015?

OPEC welcomes the agreement made in Paris last December. The environment and climate change are concerns for us all, and all our member countries were part of the Paris Agreement, submitting their Intended Nationally Determined Contributions (INDCs). However, we do need to be realistic about our energy future. Can renewables meet the energy needs of the world? No, they cannot. Do we need all energy sources? Yes, we do. Are fossil fuels going to remain the mainstay in the coming decades? Yes, we believe they are. It is important to stress that environmental protection and the use of oil and gas are not mutually exclusive. We can still use oil and gas and have a cleaner environment, and this means focusing on technologies. At OPEC, we recognize the importance of continually looking to advance the environmental credentials of oil, both in production and use. In addition, we should not forget that today around 2.7 billion people or more still rely on biomass for their basic needs, and 1.3 billion have no access to electricity. These people need access to reliable, safe, and secure modern energy services to live and prosper. We need to keep in mind that the three pillars of sustainable development—economic, environmental, and social—mean different things to different people.