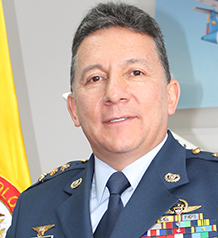 Come Fly With Me

Major General Pedro Ignacio Lozano graduated from the Military Aviation School Marco Fidel Suarez and Manager Aeronautic Aeronautical Military Institute. He studied in senior business management at INALDE. Throughout his military career, among other positions, he served as commander of Air Combat Command No. 2 in Villavicencio and Commander of Air Combat Command No. 6 in Tres Esquinas Caquetá. He served as Military Air Attaché in Brazil. As third officer in the chain of command in the Colombian Air Force, he has for the last three years been Chief Inspector General Intelligence and Air Force. He is currently the President of the state airline, Satena, a position he has held since January 2015.

Share on:
TBY talks to Major General Pedro Ignacio Lozano, President of Satena, on the company's evolution, increasing its passenger count in 2016, and differentiating the company's strategy.

How has the company developed since its foundation in 1962?

The Colombian Air Force (CAF) was founded 96 years ago, and during the development of its institutional mission it was deemed necessary to create an air transportation firm to connect the remote regions of the country. Most of those regions were among the least developed areas of Colombia, and commercial airlines did not have any interest in operating flights there. Satena was created to offer national services to those remote areas using the pilots from the CAF, and that mission has always remained clear. We have played a key role in generating a network to connect all the regions of the country.

Satena expects to have over 1 million passengers in 2016. What factors will lead to attaining that success?

We have implemented several strategies to consolidate the company in Colombia. We have always brought the latest technology to our aircrafts in order to provide our customers with a good service as well as security. Our customers know that Satena is the only government-backed airline in Colombia. Customers see us as one of the safest travel companies for domestic travel. We are strict with the quality of our service and the fulfillment that we offer. We have added four brand-new planes to our fleet in order to guarantee the quality of our flights.

Which routes are the most heavily trafficked?

Our main destinations are the most isolated geographical areas, which are in the western, southern, and eastern areas of Colombia. These are not typical destinations for tourists, but for rather for Colombian nationals. Those regions have not experienced much development, and some of them even struggle with an ongoing guerrilla presence. We do not fly to the northern regions, where cities like Santa Marta, Cartagena, and Barranquilla are located. Our mission is not to fly where the rest of airlines are, but instead serve the destinations forgotten by commercial operators.

Besides the important social role that Satena plays in Colombia, what other advantages differentiate you from your competitors?

We do not want to compete with other companies, as that is not our mission. Competing with those companies would also not be easy. Competition among the large airlines is already strong, and our goal is not to compete with them. Satena will stop its services once a commercial airline finds a potential market where it is flying right now. That is why Satena flies to routes that connect the most remote regions of Colombia.

Are there any particular regions or cities that need to be included among your destinations?

There are regions such as the Amazonas that have this need. It would be costly to send a large aircraft there, but we are thinking of sending new smaller planes. We are planning to add some 19-seat planes to our fleet to be able to connect certain cities in the Amazonas to the rest of Colombia.

What benefits could the peace agreement with the FARC bring for Satena?

The peace agreement will help tourism, and more foreigners will come. Many of our destinations are in areas where the guerrilla militia has had great presence. Tourism in those areas has not developed as a result of that, even though there are some regions with amazing landscapes and excellent locations for outdoor sports. The great outdoors in Colombia are fantastic; however, a tourism industry could not develop in those regions because of FARC and ELN. If the government is able to close an accord with both groups, tourism in Colombia will grow exponentially, and those remote regions will have a chance to develop. Caño Cristales is the most beautiful river in the world, situated in a place where guerrilla activity was high and was off limits to travelers as a result. These days, the guerrilla presence in that area has diminished and people can access those natural wonders.