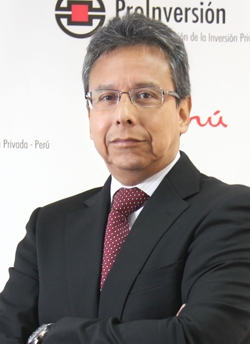 Prior to his current position, Carlos Herrera Perret served as the Director of Investor Services, also for ProInversión. He studied economics at the Universidad San Martí­n de Porres, with an emphasis on the management of foreign investment and the development of strategies for the promotion of investment. He served as a functionary at the Ministry of Economy and Finance from 1973, with the prominent role of Secretary General of the National Commission for Foreign Investment and Technology (CONITE) from 1991 to 2002. He is an expert in international negotiation, and has led investment discussions with the US, Canada, Mexico, Japan, Korea, and in the Trans-Pacific Partnership agreement.

Share on:
"Infrastructure is the foundation of the nation’s productive potential."

What is your assessment of the investment environment in Peru?

Peru is one of South America’s top economic performers. Private investment, foreign as well as domestic, has been one of the main factors behind growth from the early 1990s. The Peruvian economy has been improving since the early 1990s, when economic reforms began to take effect. At that time we embarked on a process to attract foreign investment. The main rules regarding the treatment of foreign investments, coming from those days, are based on the principle of national treatment. This means foreign investors have the same rights and obligations as Peruvian investors. The attraction of foreign investment began with the privatization process in Peru, when we opened several sectors such as mining, financing, power generation and distribution, and many other sectors that were previously only in the hands of nationals, or even in the hands of the state. This process was improved during the 2000s, when Peru decided to promote the participation of private investment in infrastructure and public services through PPP. The Peruvian Investment Policy was consolidated by the negotiation of free trade agreements (FTAs). The first FTA that Peru concluded was with the US, and with this agreement we just consolidated the open policy for foreign investment and we turned toward to a very stable and predictable policy for foreign investors. The investment chapter of the US-Peru FTA formed the basis of the subsequent 16 additional FTAs that we have negotiated and which are already being enforced. The main reason behind the expansion of foreign investment in Peru is the stability of economic policy and the stability of our investment laws.

Over the past two years alone, both Moody’s and Dow Jones have upgraded Peru’s credit rating. What investments are on the horizon?

In recent months we have experienced a slowdown in the economy. Over the coming year there will be several important mining projects and some significant infrastructure projects that will also begin the construction phase. Regarding infrastructure, there is an irrigation project being undertaken in the North, a second line of the Lima Metro, and a gas pipeline in the southern part of Peru. Regional airports around the country will also be renovated and expanded, probably in the third quarter of the coming year. Two thermal power plants in the south of the country will really expand the dynamics of the economy. We expect a GDP growth rate of about 5.5% to 6.3% over the coming years, partly due to these projects.

Do you think that in the long-term prices need to return to their former levels in order for Peru to continue growing as before? Can infrastructure fill that gap?

Infrastructure is the foundation of the nation’s productive potential. In the future, Peru will not depend as much on the price levels of minerals. A major goal is to diversify the export base and one of the most important areas is agribusiness. The irrigation project of Chavimochic in the northern coastal region of the country will incorporate around 60,000 hectares of new land for agribusiness. Together with that, in the southern part of the country, there will be a further 35,000 hectares of land also incorporated through another irrigation project. The gas pipeline being constructed to the southern part of the country will bring gas to two power plant projects that have already been awarded and will provide energy for the development of important mining projects in that zone. In addition, natural gas may also allow the development of petrochemicals.

“Infrastructure is the foundation of the nation’s productive potential.”

Over the coming years Peru is expect to regain its growth rate, at least to some degree; how will Pro Inversión continue to encourage investors to come to Peru and stay here for the long term?

We have a particularly stable economic policy that we will continue pursuing. Clear rules allow for the planning of your business. Something that has helped us hugely is our FTAs and wide range of investment opportunities, not only in mining, but in food production, tourism, and now petrochemicals. We will probably also talk about forestry in the coming years to promote Peru an export platform; the country is working to become a regional hub to connect the South American region with the Asia Pacific economy.