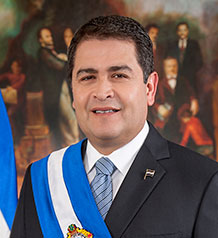 Juan Orlando Hernández Alvarado has been the President of the Republic of Honduras since January 2014, having held a number of important positions in the political life of Honduras prior. He studied law and social sciences at the National Autonomous University of Honduras (UNAH) and went on to earn a master’s in public administration from the State University of New York.

Share on:
"The FTA between Honduras and Colombia sets the rules for a bilateral relationship with clear and predictable trade standards."

In March 2010, Honduras and Colombia signed an FTA. Since then, how has trade between both countries developed?

The FTA between Honduras and Colombia sets the rules for a bilateral relationship with clear and predictable trade standards between the two countries. Honduras’ experience has been positive. While we still have a trade deficit with Colombia, aspects agreed in the FTA have led to an increase in imports for Colombia from Honduras as a result of the placement of new products in the Colombian market, especially in the clothing segment. Without any doubt, this trend has had a positive impact on the economy of Honduras, through the generation of jobs and attracting investment toward product placement in non-traditional markets, but with great potential. It is worth mentioning that the framework of dialogue that the FTA generates with Colombia also leads to regular assessment of its performance in order to strengthen it and improve bilateral trade. To date, it remains to define an agenda for further market access for products that do not now have preferential access. There is no doubt that the FTA has been beneficial for both parties, although Colombia has a better balance due to the size and dynamism of its economy. Honduras exported $10.5 million and imported $187.7 million, but registered a drop in sales to the country. But the two countries have increased sales, which is beneficial to both countries, as we generate growth and job creation. Our entrepreneurs should take advantage of the opportunities offered by the market in Colombia and we hope to help them find new markets in that sister country.

In terms of security, in September 2015 Honduras and Colombia signed a unilateral agreement to fight against terrorism and organized crime. How do you expect this agreement will help progress toward achieving better safety levels?

Indeed, on September 25, 2015, Honduras and Colombia signed the Memorandum of Understanding for the Establishment of the High Level Group on Security and Justice (GANSJ), which will be used as the primary instrument for the coordination and monitoring of actions of all legal instruments in force between Honduras and Colombia on security and justice, drugs, combating organized crime and human trafficking, and others. We certainly share with Colombia the primary notion of working together, taking advantage of best practices and exchange of experiences in the fight against insecurity through the exchange of information and coordination of actions under the agreement and the identification and implementation of best practices to strengthen the institutions responsible for security in our countries. The GANSJ’s scope spreads across the political, operational, legal, and cooperative levels with a view to ensure the implementation of actions that generate legislative and procedural harmony, and effective communication channels are thereby making sure that the results achieved in the fight against insecurity are successful and with a measurable impact for the advancement of our peoples. The partnership between the two governments and coordination through GANSJ has allowed us to accurately hit criminal gangs, especially drug cartels. Honduras used to be a country widely used as a bridge for the transit of drugs from Colombia, and other neighboring countries, to Mexico and the US, and this has been greatly reduced. The US government itself has acknowledged that traces of drug flights have been reduced by over 70% and all this is possible thanks to the cooperation between our governments and their agencies. The seizure of drugs is increasing every year. At the same time, Colombia has helped us to prepare our police forces, prosecutors, and judges. We hope to continue working on it, because it is beneficial to all parties involved.

What it is the present political and economic relationship with the government of Colombia?

Honduras and Colombia established diplomatic relations on January 1, 1825. Since then the bilateral relationship between the two countries has been marked by strong ties of cooperation and friendship in the various regional and multilateral spheres, defining the relationship as that of strategic partners. It is important to mention the results of the active relationship, such as several legal instruments, to regulate cooperation actions (security, trade, investment, culture, education, and technology exchange), as well as common interest issues marking the international agenda. In that sense, we have a Bilateral Mechanism for Dialogue and Political Consultations created by the Memorandum of Understanding signed in Tegucigalpa on September 4, 2012. The Bilateral Mechanism provides a mechanism for consultation at the ministerial level to address political, cooperation, economic, and trade issues, as well as the updating of regulations, security issues, regional and multilateral issues, and also a bi-national mechanism at the level of Vice Chancellors responsible for reviewing commitments, who to date have met twice. The Joint Committee on Technical Cooperation, Science, Culture, Education and Sports was created under the Agreement on Technical and Scientific Cooperation signed on March 4, 1980 and the Cultural and Educational Cooperation Agreement signed on August 12, 1961. The last meeting of the Joint Committee V was on April 4, 2013 in Bogotá, at which we defined the Cooperation Program 2013-2015. Besides trade, Colombia has increased investment in Honduras. The Honduran banking and cement sectors have benefited from the arrival of new capital. We are excited about this and hope that more Colombian companies and investors can settle in the country. We guarantee legal security, as well as mechanisms to solve differences and disputes, established by the FTA. And finally, as I mentioned before, we have the GANSJ, which frames the action in the security and justice fields. The FTA reaffirms our strong bilateral relationship in all its different dimensions.