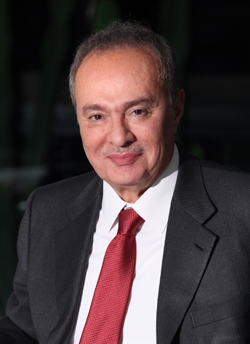 George Zard Abou Jaoude started his real estate career in Saudi Arabia in 1976 after graduating from the American University of Beirut (AUB) with a Bachelor of Arts Degree in Architecture. From 1976 to 1988, he managed and co-chaired both the Modern Design Company, and the Saudi Aluminum Manufacturers, and successfully developed over 20 high-end architecture and interior design projects. A decade later, Abou Jaoude moved back to Lebanon and undertook over 30 residential, commercial, and mixed-use projects. Among them is one of the largest real estate developments in Lebanon, BeitMisk, located in the heart of Mount Lebanon. Abou Jaoude is also the man behind Zardman, a real estate company that develops new neighborhoods and promotes new lifestyles.

Share on:
"Emaar, the company that built the highest tower in the world, the Burj Khalifa, is assisting us in almost every aspect."

When and how was the GZA Group established?

We have a history of over 35 years, and have now consolidated all operations into the GZA Group, which was originally called Zardman and Renaissance Holding. Renaissance deals with the BeitMisk Project, which concerns Misk Town—a 70,000 sqm residential village with retail services. Zardman, on the other hand, has 104 buildings ongoing, and is managed by my children.

What was the total investment in the BeitMisk project?

The original investment was around $200 million, and the project will take 10 years. In the beginning, we did not need that much equity. I believe that over the coming one or two years, another wave of consolidation will take place. We have some business today in Erbil, in a significant project with an area of 200,000 sqm. We are also in the process of establishing some work in Africa, which will also be a megaproject.

“Emaar, the company that built the highest tower in the world, the Burj Khalifa, is assisting us in almost every aspect.”

How has the business portfolio developed over the past decade?

It was in around 2008 that I fully committed to working in real estate. The first major real estate project we did was the retail center at the entrance to the Presidential Palace of Saint Jean. We also worked on two large telecommunications center buildings. There are many buildings like those that we have worked on, but BeitMisk is on a different scale, and occupies well over 50% of my time.

What is the range of properties on offer at BeitMisk, and why do you feel it is such a unique project in Lebanon?

The properties go from one bedroom to huge villas. There are 2,000 units altogether, and it can accommodate up to 12,000 people. There are currently 400 families living in the project, and we are starting the downtown for BeitMisk in the latter half of 2014. We have an occupancy rate of 100% for the units already built. Many of the apartments that we are still building have also already been sold. We have connected the infrastructure, such as water, telecommunications, internet, and electricity, and the scheme even uses wastewater to irrigate the green areas. This is giving us an edge over the competition, because we have our own security. We have truly mastered all of the energy-related ins and outs. We have achieved zero pollution, as we use both solar and gas energy. Meanwhile, in our scheme you will never see the wiring, and with the lighting, we use a new advanced system that is energy efficient. It is a masterpiece and unique to the region.

How much of the entire project is constructed?

Almost one-fifth of the town has been constructed so far, and around 400 of the 2,000 units. The rest of the construction will be determined by market demand. The project land is large enough, meaning that we are not obliged to build all the units simultaneously. We are using less than 20% of the total area, meaning that 80% of the land is given over to gardens and green space. Naturally, the downtown area is pedestrianized, and we have a large club with its facilities spread over a 15,000-sqm area. Still, costs have risen slightly since we began construction, which affects the final selling price. We are now selling at 1.5 to 1.8 times the original price, and it is still rising.

How would you assess GZA Group’s performance over the last year?

We are doing well, but we could be doing better. Emaar, the company that built the highest tower in the world, the Burj Khalifa, is assisting us in almost every aspect. As one of the largest companies in the world it has a great deal of experience, which we are leveraging in terms of our cooperation.