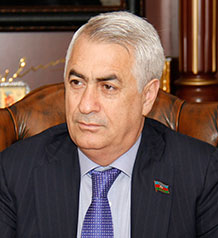 Share on:
"In February 2016, President Aliyev visited Iran and 11 agreements were signed."

There are plans to connect the railways of Azerbaijan and Iran by the end of 2016. How will this connection bring new benefits to Azerbaijan and the transport sector of the country?

In February 2016, President Aliyev visited Iran and 11 agreements were signed. It was announced that a 8.3km section of the railway between the two countries and a railway bridge over the Astara River on the Azerbaijan-Iran state border will be completed in 2016. We are now in the process of designing it, and we have started looking for a contractor, although we may eventually build this bridge ourselves. This connection has many implications for our country and the transport sector in particular. This project will connect the Persian Gulf with Malacca Bay through a multimodal transport system, as well as provide a connection to St. Petersburg and Helsinki through older railways built back in Soviet times. We will be connected to Mumbai Port and Bandar Abbas Port. Current figures indicate that there are 5 million tons of cargo moving between India and Europe and about 7-9 million tons between Russia and Iran. We would enjoy the opportunity to be involved in some of this activity. There is a political will to achieve this and a willingness of the railways to help. In the first year of operation of the new railway, we are planning to transport 2-5 million tons of cargo, with plans to increase capacity up to 20 million tons in the future. This effort will require some renovations and we will need to see the construction of additional facilities alongside some new, technical solutions. This connection will boost Azerbaijan’s currency inflow and work to create new employment opportunities for Azerbaijani citizens. If we can handle 2-5 million tons, we will be able to get $50-70 million and create 2,000-3,000 new jobs dealing with railways, maintenance, and so on. Iran also wants to establish a railway connection with Moscow and St. Petersburg.

In this project, we are creating a transport corridor that connects the East and West. It starts off in China, passes through Kazakhstan, the Caspian Sea, Azerbaijan, Georgia, Ukrainian ports, Bulgaria, and continues further along the Danube. Over the past 100-150 years, the majority of cargo has been shipped by sea, because it is usually a cheaper option. It is hard for railway transportation to beat sea transport; however, we can compete through the use of air carriers and trucks. It is challenging, but we believe that we will be able to win in this competition. With the new transport corridor connecting Mumbai to Europe, we will soon be able to deliver goods along this route in no more than 14 days at the most. In 2015, Kazakhstan processed 1.2 million tons of cargo from China, while we are just getting started in this activity. We will be working in collaboration with all of our neighboring countries in this capacity.

What is the current progress of the Baku-Tbilisi-Kars (BTK) railway project?

In regard to the BTK railway, there have been a lot of obstacles to the project because of the Armenian diaspora and the ongoing situation in that regard. There was an outcry that this BTK project leaves out Armenia, while we, an Azerbaijani company, started building this railway. With regards to the project’s technical updates and specifications, we have almost completed 183km of the railway in Georgia; there are only some minor details that we need to finalize. Initially, this railway will handle 5 million tons of cargo and in the future the capacity will reach up to 17 million tons. The Georgian part of the project will be completed by the end of 2016. After the completion of the Georgian portion, the only part left to complete will be in Turkey, and ground works are almost finished there at this point.

How can Azerbaijan’s railways improve logistics capacity related to the county’s exports and become an important source of non-oil revenue for Azerbaijan?

It is no surprise that the oil and gas sector continues to play a huge role in the economy, but I believe that we need to diversify and focus on four main sectors: transit transportation, as this will allow Azerbaijan to transform into a transport hub; technologies and innovation; tourism; and agriculture. There is no country that can succeed without having a strong agriculture sector. The increased railway activity in Azerbaijan has the ability to improve the strength of important domestic sectors and can bring positive effects to ordinary people in the country.

After transporting nearly 17 million tons of cargo in 2015, what are your expectations for the year ahead?

The global economic situation is currently characterized by a period of decline. We are doing as much as we can at Azerbaijan Railways. We will continue our efforts to increase the amount of cargo over 2016. In 2014 we handled 21 million tons, mainly inside the country. The decrease in the amount of cargo can be explained by the devaluation of the national currency, decline in the domestic construction industry, and other related factors. The level of imports in the country was reduced as well. We are expecting the amount of cargo to surpass 25 million tons by 2025.