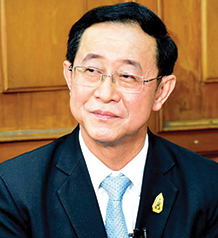 Arkhom Termpittayapaisith was appointed Minister of Transport in 2015. Prior to that, he was Deputy Secretary-General of Thailand’s National Economic and Social Development Board (NESDB) since 2010. Termpittayapaisith is with the Cabinet and Parliamentary Liaison Office and Chief Information Office. He was an Advisor of the Board of Directors at Government Savings Bank. He served as a Director of Mass Rapid Transit Authority of Thailand and as Independent Director of PTT Public Company. He was educated at the National Defense College in Thailand and holds a BA in economics from Thammasat University, and a master of economics in development economics from Williams College in the US.

Share on:
TBY talks to Arkhom Termpittayapaisith, Minister of Transport, on the major infrastructure projects in the country, developments in the aviation industry, and becoming the ASEAN logistics hub.

Are you satisfied with the progress that has been made on the major infrastructure development projects initiated by the government?

Our prime policy focus areas are aimed at driving investment projects in Thailand’s railways. Rail is not new in Thailand—it is 100 years old—but we never modernized our technology, so that is now our priority. Bangkok currently has two mass-transit lines, but the aim of the government is to expand this to 10 lines in the coming years. All 10 lines will be approved by the end of 2016, and we aim to commence with the construction of the pink, yellow, and orange lines in the second half of 2016. Our second major focus is the Intercity Rail system, where we will double our single-rail track, one of the obstacles to our transport and logistics sectors flourishing. We have six double-track projects altogether, mainly linking Bangkok to the north, the northeast, and the south of the country. Our third focus is the high-speed rail, which the government has approved and is currently working on with our Chinese counterparts.

From the ministry’s point of view, what have been the key milestones and trends in the aviation industry?

For aviation, the major issue is delisting ourselves from the significant safety concern label, the SSC, which was issued to us due to safety concerns over aviation regulation. We hope to complete our recertification of airlines by November and thus request for a re-audit of our supervision and regulations of the airline industry at the end of 2016. Our goal is to improve our capacity on the human resources side because airlines in Thailand have been growing rapidly. Over the past 10 years or so, we have seen an evolution of the entire industry, particularly as low-cost airlines grow rapidly and bring not only foreigners to Thailand, but also crucially serve the domestic market at affordable prices, which is vital for our population. We see huge potential in the future of inter-regional travel throughout ASEAN and beyond. Thai Smile, for example, is becoming more active in connecting with regional cities, which opens up new, exciting markets and is affordable from the airlines’ point of view. Because of this rapid growth, we have to look at our facilities and ensure they can accommodate this surge. The government policy is to have three major airports for Thailand’s capital city, i.e. Suvarnabhumi Airport, Don Mueang Airport, and U-Tapao Airport. Primarily, we are looking into expanding Suvarnabhumi Airport by building a satellite terminal, a domestic terminal, and a third runway. We use Don Muang Airport as a domestic and low-cost terminal with the need for expansion further by renovating the third terminal. Our regional airports are also at full capacity so we need to expand. We promote more intercity flights that do not feature Bangkok to ease the congestion, such as Chiang Mai-Koh Samui, Chiang Rai-Phuket, and so on.

With all these infrastructure projects in the pipeline, do you believe Thailand has the potential to be the logistics hub of ASEAN?

Yes I do. We planned for regional connectivity 20 years ago when we first built the road network connecting the country. To the south is Malaysia and the border checkpoint is extremely congested, so we will open a new border checkpoint. Looking at Cambodia, we have the biggest checkpoint border, which is now congested. We will build a new border checkpoint just for trucks and other heavy vehicles. We are building a second bridge to Myanmar, which will make it easy for trucks and cargo to cross the border. In the northeast we have three friendship bridges crossing the Mekong River. We seek to reduce the cost of transportation by improving rail connectivity across the region. Thailand will be the logistic hub because our population is huge in terms of its purchasing power compared to our neighbors. The main objective is integrating our own infrastructural development with the new Silk Road project that the Chinese are building.