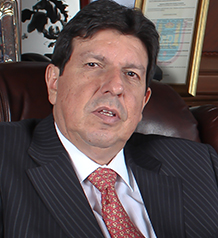 With more than 36 years of experience in the construction industry, Fernando Marí­n Valencia, a Universidad Industrial del Santander graduate, has become one of Colombia’s major developers. He was a member of the Board for ECOPETROL, representing Colombian ex-president Andrés Pastrana Arango from 1998-2002. He also served as an ambassador in Thailand, Malaysia, and Vietnam in 2002. He began his career in construction in 1976, when he founded the Marval S.A. In 2004, he founded Grama Construcciones, a Colombian company ranked among the top 10 in sales, which has transformed the lives of thousands of families in the Colombian Caribbean, as well as other important cities like Bogotá and Bucaramanga, among others.

Share on:
TBY talks to Fernando Marí­n Valencia, President of Grama Construcciones, on making the right investments, predictions for the construction sector, and current projects.

Which regions have the most investment potential in the real estate sector?

The northern coast of Colombia is an attractive investment destination, not only for real estate, but also other economic sectors due to the fact that it has the best ports, in Cartagena, Santa Marta, and Barranquilla. There is plenty of trade and traffic going through those ports, which are strategically and centrally located, providing connections to the Caribbean, North America, Europe, Africa, and the rest of Latin America. Barranquilla is one the most interesting cities along the Atlantic coast because several positive initiatives and incentives have been introduced for businesses and investors; there is a large and well-educated population, and it is only one hour away from Santa Marta and Cartagena. Barranquilla is strategically located to keep growing and offering great opportunities in real estate. The peso’s fall against the dollar has made people nervous about real estate in Colombia, but this has also made the local real estate market much more affordable on an international level. We can expect a serious injection of foreign investment along the Atlantic coast this year.

What is your target market?

We work with all people from all segments of society and all tiers of real estate, from low-income housing to luxury, from houses worth $15,000, to houses worth upward of $400,000. The government has a program called Vivienda Para Ahorradores (Houses For Savers), which helps people own their own houses through subsidies whereby homeowners pay a significantly lower monthly quota on their homes. About 100,000 houses have been sold as part of that program and we have participated with 1,500 houses. Colombians want to own their houses, which is different from Venezuela or many other countries in the region where renting is perfectly acceptable. So this program makes sense for Colombians, even though there have been some doubts regarding its sustainability in the long term.

What are the main projects you are working on at the moment?

Most of our projects are located along the coast. We have three main projects, each targeting a different segment of the population. One is called Ciudad Caribe, which includes 4,500 units, valued between $15,000 and $30,000. Another big project is Ciudad del Mar, which features more than 3,000 units aimed at middle-income families, worth between COP170 million and COP280 million. And we also have a top-tier project between Barranquilla and Cartagena called Novaterra, which is like a small city in itself, and houses there go from $400,000 onwards. We also have other large-scale projects that we are working on at the moment. For example, we are involved in 52-storey hotel AC Marriot by the sea, Amura, which will be the tallest hotel and condo in Cartagena. We were previously involved with various projects in the US, but now we have decided to focus on the domestic market; most of our projects are in Bogotá, Barranquilla, and along the Atlantic-Caribbean coast in the north of the country.

What are you expecting for 2016 in the Colombian construction sector and what are your targets for the year?

I expect to grow around 15-20% in 2016 as our projects continue to come online. Government housing subsidies will continue to spur the sector and add to its growth figures. The depreciation of the peso might tighten up the domestic market somewhat, but it will also entice foreign investments into Colombia, especially from the US, mainly from Colombian expatriates or people with Colombian roots living there. Other sectors will also keep growth rates stable, with the coffee sector, flowers, and other sectors expected to post high export rates due to the added competitiveness they will see internationally from the weakening of the peso. We expect a growth rate for Colombia of 2.8% in 2016, which is not ideal compared to previous years, but at least it is still growth.