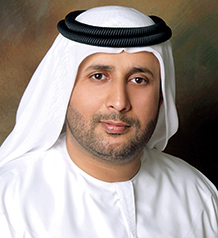 Ahmad M. Bin Shafar has a degree in business administration in management from California State University and has over 19 years of experience in senior management positions, including eight years with Standard Chartered Bank in the areas of corporate and retail banking. He is currently the CEO of Empower, as well as the Chairman of the board of directors of Empower Logstor Insulated Pipe Systems (ELIPS) and also sits on the board of the International District Energy Association (IDEA).

Share on:
What are the biggest projects Empower is involved in at the moment? Empower has started some major projects this year with a number of plants under development. For example, we […]

What are the biggest projects Empower is involved in at the moment?

Empower has started some major projects this year with a number of plants under development. For example, we have the Jumeirah Beach project, which will involve a new 35,000-ton plant room. We are taking existing business and converting it into district cooling. This means people have accepted the concept of district cooling and are subscribing more and more to it. We are doing the same thing in the Dubai Technology and Media Free Zone (TECOM Area C), where we are putting in a huge new plant room, along with two more plant rooms in Ghuroob Mirdif and another in Business Bay. We are also working closely with other investors on projects such as Dubai Lagoon and the Dubai Design District (d3) and are also working toward bidding for Expo 2020 projects. Energy is one of the main themes for Dubai Expo 2020 and we are trying to be part of this. We need to encourage the use of district cooling and green buildings. This environmental vision is really supporting the whole economy as people understand the disadvantages of climate change and the benefits of good energy practices.

Some people still argue that district cooling is not an efficient and cost-effective method. Why do you think people still have this view?

We started district cooling 12 years ago and faced inhibitions from customers in adopting district cooling. Today, the technology is being accepted widely and the industry is growing tremendously, which means we can actually show that it works and is much more cost-effective.

Empower has created a world-class, state-of-the-art Command Control Centre. What is the ultimate purpose of this center?

This is the first command control system in the world for district cooling. HH Sheikh Mohammad Bin Rashid Al Maktoum, the UAE Vice President, Prime Minister, and the Ruler of Dubai, is driving Dubai to be a smart city and as part of this we have created a smart system whereby, for example, we know if there is a problem in our network before the consumer realizes. We are aiming to be proactive as well as responsive to customers. By prioritizing customers this adds value to the industry itself. Our Command Control Center technology also enables the system to be controlled from one place and one engineer can operate more than 10 plant rooms—we currently have 65 in total. The system saves on manpower, increases efficiency, reduces electricity consumption, and optimizes usage. All the benefits go to the stakeholders, meaning the government, the state electricity grid, the consumers, and Empower

What green initiatives is Empower implementing?

Everything we have done over the years is in support of green buildings and green technology as part of HH Sheikh Mohammed bin Rashid Al Maktoum’s long-term national initiative to build a green economy in the UAE under the slogan: “A green economy for sustainable development.“ We are now using gray water (treated sewage effluents) instead of potable water, which we need to conserve. We are also using thermal energy storage (TSE) tanks in each plant room and collecting water during the lower load periods in the evenings. We store and chill this water and then discharge it during the peak energy-use hours of day. This technology thus saves electricity usage and reduces energy consumption.

The region’s district cooling market is forecast to grow by more than 16% over the next five years. What is your outlook?

At the moment we have 70% of the Dubai market and in the region we have close to a 50-60% share. It is important to understand that while district cooling might be a luxury in some parts of the world, such as the US or South Asia, in Dubai it is a necessity. It is impossible to live in this climate without some form of air conditioning, but conventional air conditioning makes up around 70% of electricity bills here. District cooling halves this amount.

In February Empower decided to halt plans to launch an IPO. Why did you decide not to go ahead?

The market conditions do not support this at the moment. Empower is reflecting good profit margins with a high turnover, and the company is performing very well. For the time being we are working on acquisitions, then we can think about an IPO. At the moment, our projects are properly and sufficiently funded institutionally, so it is not in our immediate preferential list, and an IPO is just another way of accessing funds, after all.