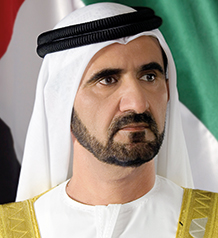 Share on:
Sheikh Mohammed Bin Rashid Al Maktoum, Vice-President and Prime Minister of the UAE and Ruler of Dubai, on the Smart Dubai Happiness Agenda, the standout projects over the last year, and the Year of Giving.

Over 2016, Dubai continued to prove its credentials as a well-diversified economy and raise its global competitiveness, while at the same time reinforcing its character as a tolerant and cosmopolitan city. Over the last year, we continued to reap the fruits of our long-term strategic diversification program, and I believe we are well placed for sustainable growth.

Our success has allowed us to look beyond the conventional and achieve the exceptional. Sustainability continues to be a key focus for us. We have completed the second phase of the Mohammed Bin Rashid Al Maktoum Solar Park, an USD13.6 billion investment, which by 2030 will become the largest single-site solar park in the world, able to generate 5,000MW of electricity—enough to power 800,000 homes.

After taking a deep look at how our government can better fulfill its mission of serving the people, we launched the Smart Dubai Happiness Agenda, the world’s first science-based model for measuring and impacting the happiness of a city’s residents. We also unveiled the Dubai Data initiative, the single most comprehensive city-wide data initiative for accessing and sharing city data across the public and private sectors. By unlocking the greatest value from data, the initiative aims to benefit all stakeholders, including government departments, private organizations, investors, residents, and visitors.

By leveraging the latest in technology and customer experience design, together with a culturally aligned, science-based approach to impacting people’s happiness, Smart Dubai has brought together two powerful forces for Dubai’s transformation. These efforts are driven by our firm belief that the success of a city’s government in serving its residents is not measured by swipes or clicks, but by people’s happiness.

Tied to this has been a wider restructuring of the UAE government. Eight new ministers were announced, out of which five are women. I truly believe that the new ministers of the 12th Cabinet of the UAE are the most diverse and dynamic in the history of the country. I am confident they will be able to drive forward innovative ideas that will enhance the UAE’s growth and development.

As a government, we know that a society cannot be sustained without a culture of giving and a sense of community responsibility among both people and organizations. Sheikh Khalifa bin Zayed Al Nahyan, President of the UAE, declared 2017 as the “Year of Giving.” The spirit of giving is embedded in the UAE’s heritage and culture, and the government seeks to work with the private sector closely to instill this even more deeply in our social fabric.

This ethos of cooperation and partnership is what we seek to convey to the world as Expo 2020 draws closer. By then, we aim to welcome 20 million visitors a year to Dubai, twice the number of visitors in 2012. Expo 2020 will be an opportunity to promote synergies between Dubai and the rest of the world under the theme “Connecting Minds, Creating the Future.”

One of the most exciting moments of the year for me was the laying of the foundation stone of The Tower, which, when complete, will stand in Dubai Creek Harbour as the world’s highest man-made structure. The Tower is a symbol of our desire to always push the boundaries and create a better future, building on the achievements of our founding fathers.

The UAE’s economic accomplishments bear testament to its spirit of innovation. As we look ahead, we seek to actively include a wide range of stakeholders in building the future of Dubai. Together, embracing our diversity and our potential, we will make Dubai the smartest, most innovative, and happiest city in the world.