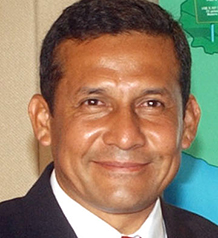 President Ollanta Humala
joined the Army Officer School in 1979, and studied zootechnics at Universidad Nacional Agraria La Molina. In 2001 he earned a Master’s at Escuela del Centro de Altos Estudios Nacionales(CAEN) in National Defense and in 2002, successfully completed a Master’s in Political Science at the Pontificia Universidad Catolica del Peru. He was a military attaché in France, where he began a PhD at the Centro de Altos Estudios para América Latina (the Center of Higher Studies for Latin America). In 2005, along with his wife Nadine Heredia Alarcón, he founded the Peruvian Nationalist Party. In June 2011, he was elected Constitutional President of the Republic, swearing into office on July 28th, 2011.

Share on:
TBY talks to HE Ollanta Humala, President of Peru, on economic policy, social and financial inclusion, and Peru's role in the regional economy and geopolitical structure.

Peru has seen a decade of strong economic growth and declining inequality. What economic ideology has guided your presidency with regard to balancing foreign investment and domestic policy concerns?

A focus on economic growth with social inclusion rests at the core. In this sense, private investment has been essential to achieving meaningful development outcomes that raise people out of poverty. Private investment has led to a higher level of salaries, household income and consumption, which has allowed an expansion of the middle class and a good performance in poverty reduction. For this reason, investment is actively promoted by the Peruvian government, both domestic and foreign. During 1H2014, 56% of FDI flows came from the reinvestment of profits, reaching high rates in sectors such as services (34.5% of total reinvestment), mining and hydrocarbons (32.7%), and the financial sector (15.5%). On the other hand, Peru has been ranked 35th out of 189 countries in the 2015 Doing Business Report, and second in Latin America. An important factor to highlight is that Peru has comparative advantages that attract investment. For example, industrial electricity rates are below the Latin American average, since 60% of Peru’s electricity is generated by hydropower and a further 35% by natural gas. Regarding social inclusion policies, our strategy is based on the Life Cycle approach where the focus is on early childhood, teenagers, and young people. In particular, we pay greater attention to job generation and scholarships for young Peruvians. To avoid the “middle income trap,” policies focus on the underpinnings of long-run economic and productivity growth such as education, health, innovation, and productive development.

The Pacific Alliance has emerged as a significant regional economic force. What are your long-term ambitions for Peru’s place in the alliance?

Nowadays the Pacific Alliance is in a very good moment. This alliance, as a whole, constitutes the eighth largest economy in the world, and represents the seventh largest exporting group worldwide. It attracts more than 40% of the FDI that flows into the Latin America and the Caribbean region. This, summed up to the results obtained to date, as well as to the tasks still in agenda, has attracted the interest of 32 observer countries from five continents, which makes us realize that we are doing things right. In the long term, I would like to see that the innovative initiatives that the Pacific Alliance is seeking to implement create positive results and serve as a reference to other countries in Latin America and the Caribbean region. In that sense, I have the expectation that in the future the Alliance will be a stronger economic block, and that it will urge other countries in the region towards the development model that the current four members share. For that reason, I would like to see Peru become a reference for other economies in Latin America and the Caribbean region, as a leading country in the Pacific Alliance sharing its positive experience implementing 21st century economic policies.

In the late 2013 and 2014, mineral prices fell and Peru’s rate of GDP growth decreased with them. What are the Peruvian economy’s greatest non-mineral strengths, and how is your government encouraging continuing and diverse growth?

The Peruvian economy’s greatest non-mineral opportunities are located primarily in the retail sector. Peru has two shopping centers for every million people, while Chile has four shopping centers for the same number of people; secondly, comes the vehicles sales sector: Peru has six vehicles per 1,000 people, whereas Chile and Argentina have around 21 per 1,000 people; the banking sector is also an area of opportunity: credits are at just 30% of Peruvian GDP, while in Colombia thy represent around 40%, in Brazil 55% and in Chile over 80%; manufacturing exports are also ready: the 2013 per capita level was at around $700 while in Chile it was around $3,000. In all these areas, we have significant ground to catch up; developments that will drive growth in the coming decade. Concerning the sustainable development of our natural resource-rich country, the Peruvian government also promotes productive diversification beyond the extractive industries. Manufacturing is growing. Between 2000 and 2014, for example, the number of products in the non-traditional sector increased fourfold; and medicine exports, perfumery, and personal care products increased fivefold. We also recently launched the National Plan for Productive Diversification aimed at promoting new sources of income and growth. The pillars of this plan are: diversification promotion, which aims to diversify our exports’ basket; adequacy of regulations, aimed at cutting red tape that prevents productive investment; and reduction of productivity heterogeneity, aimed at closing the productivity gap between the modern and the traditional sectors of the economy.

Economic stability has been a feature of your administration. How will you ensure that consistent economic policy is part of your legacy?

The government has worked hard to ensure Peru’s macroeconomic stability against exogenous shocks, and at keeping a more fiscally conservative regime. Also, our macroeconomic buffers are ready to defend the local currency, thanks to the Central Reserve Bank, which has continuously increased its international reserves over the past decade. As a result, Peru has a much higher international reserves to GDP ratio (32%) than its Latin America counterparts (16%). On the other hand, we have an important fiscal stabilization fund with more than 4.4% of GDP, and—according to the IMF—the lowest funding needs in Latin America. Peru’s net public debt is at 3.7% of GDP, below its regional peers such as Mexico (42.1%), Brazil (33.7%), and Colombia (23.9%). On the fiscal side, during the current administration, we have been working on a new macro fiscal framework that will help public spending disengage from the more volatile source of fiscal revenues, such as the natural resource sector’s revenues in relation to commodity prices. With this new institutional framework, fiscal policy is in line with international best practices for commodity-exporting open economies.

Latin America has a promising future, despite some uncertainties. What is the role of Peru in the upcoming years?

Most Latin American countries have shown their financial and economic strength during this international crisis. Peru has stood out among them thanks to its fiscal and macroeconomic policies. They allowed us to have 16 years of continuous growth and to implement social policies that effectively fight against poverty. Peru will continue as a regional reference on successful economic and social policies. But also, as an attractive countryfor investors—with an enormous potential in different sectors—Peru will continue to receiving investment from global and regional capitals, and show them the opportunities in our internal markets and as a center for regional activities. Latin America is widely known for the production of commodities, but now the region has to give a step forward and position itself as a region in a process of productive diversification. Peru has already been working on a National Plan of Productive Diversification to generate alternatives that boost economic growth and sophistication. In addition, Peru foresees that the Pacific Alliance is an opportunity to make regional economies more competitive and take advantage of complementary markets.