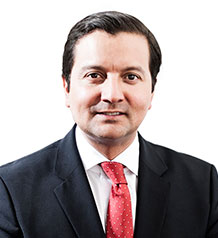 David Luna Sanchez is a lawyer from Universidad del Rosario and has a master’s degrees in government and public policies from Universidad del Externado in Colombia and Columbia University in the US. In 1997 he was elected Mayor of Chapinero and was Councilman o of Bogotá for two terms. In 2006 he was elected to Congress. In 2011 he became Deputy Minister of Labour Relations, and in 2013 was appointed Presidential Advisor for the Regions. He is currently the Minister of ICT.

Share on:
"The government of President Juan Manuel Santos has made an unprecedented bid to strengthen public television."

The government, through the Ministry of ICT, will allocate more than Ps1 billion for the acquisition of tablets and computers for schools across the country within the “Computers to Educate” program. What is the long-term objective of this program?

The Ministry of ICT, through the “Computers to Educate” program, seeks to contribute to strengthening the quality of education through technology. To achieve this, the Ministry allocated a budget of Ps1.4 billion between 2015 and 2019 to support the education of children and young Colombians. For this purpose, “Computers to Educate” developed a strategy that includes three aspects: the first is the delivery of technology to educational sites (tablets and laptops acquired through public auctions); the second is training teachers and principals through a certified course, where they will get a diploma, and giving them a tablet as a tool for their work, as well as training parents through the so-called ICT Family School; and, finally, the third aspect has to do with the use of electronic waste (obsolete computers) of previous benefactors, as part of our environmental commitment and responsibility. The goal for 2018 is to provide tablets to each one of the teachers in the country’s public educational centers and qualify them with an ICT diploma.

The implementation of digital terrestrial TV has a long list of technical benefits such as improved picture and sound quality and the possibility of increasing the number of channels through the multiple channel feature. However, the most important thing is what these technical advantages mean for the end users. This translates into better content and the ability to access information for free, changing the way Colombians watch television.

The Ministry recently presented a Colombian documentary, “Operation Antarctica,” a documentary that has been largely funded by the Ministry to attract offers for national public television. What other initiatives are under way?

The government of President Juan Manuel Santos has made an unprecedented bid to strengthen public television. That effort has resulted in co-productions with world-renowned houses and domestic producers to continue to position public television with high quality content. Since 2010 the government has invested about Ps25 billion in multiplatform content, developed with the support of international production houses, with a scheme that is improving programming and public TV content. In addition, we have opted to strengthen the capacity of personnel involved in these large projects, promoting good practices in television production. 2016 will be no exception; we continue to focus on the development of a convergent strategy for our public television, increasing the production of local content and strengthening regional TV channels for users to find a wider range of content.

On February 22, the World Mobile Operators Association (GSMA) recognized Colombia as the country with the best government strategy for managing spectrum for mobile broadband communications. What projects are lined up in this area for this 2016?

This award was a recognition of Colombia’s excellent management of spectrum. Our strategy aims to ensure the availability of this resource to support the growth of mobile broadband internet connections, which we project to have with the implementation of the “Plan Vive Digital.” We have been making projections for spectrum requirements for the next 10 years and these are updated annually. This year plans to continue with this strategy of judiciously studying mobile spectrum needs for the coming years, with an additional component: the study of frequencies for the fifth generation of mobile communications and participation in 5G in international forums such as ITU and CITEL. Colombia expects to continue to have an important role in these discussions. These activities of international participation go hand in hand with the management of international agreements for the use of spectrum in several frequency bands to ensure proper provision of telecommunications services in the border areas. In the telecommunications area, in 2016 we have a major challenge; the auctioning of the 700 Mhz band, the most coveted spectrum by mobile operators thanks to its coverage characteristics and propagation. This process will ensure better telecommunication services for Colombians.

The 2010 Vive Digital plan aimed at incorporating lower classes of society in the digital revolution. As a result, the country increased internet connections from 2.2 million in 2010 to 9.9 million in 2014. How do you evaluate the fact that Colombia is now one of the top countries for internet penetration in Latin America?

The work that Colombia has done over the last five years makes us feel proud. We have worked hard to provide the country with the tools for the digital revolution. That’s why this new phase of the Vive Digital plan is focused on people, to use current infrastructure for the development of applications, services, and tools to improve the quality of life of Colombians. We cannot rest on our laurels thinking about past achievements, we have to bring connectivity to the lower strata, to ensure that every citizen enjoys the benefits of being connected to the network, no matter what area of the country they are in. To do this we have an ambitious plan to grow from 12 million to 27 million internet connections by 2018. This will translate into millions of opportunities for Colombians to access new jobs.