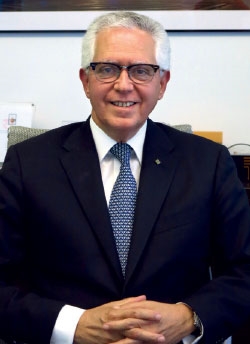 Jorge Salgado joined Liverpool in 1995 as CFO and was appointed CEO in 2011. Under his tenure as CEO the Company has opened 21 stores, eight fashion malls, doubled the capacity of the National Distribution Center, fully renewed the IT infrastructure, and re-launched the company’s credit card business to become one of the largest card issuers in the country. He is also a member of the Board of Directors and the Board’s Operations Committee. Before joining Liverpool, he had served as Executive VP, CFO, and Vice Chairman of the Board of Sears Roebuck de México, S.A. de C.V. Mr. Salgado holds a degree in Accounting from the National University of Mexico.

Share on:
How has the Port of Liverpool grown since 1847? Puerto de Liverpool was founded by a French immigrant in Mexico named Jean Baptiste Ebrard, who sold clothing, garments, and fabrics […]

How has the Port of Liverpool grown since 1847?

Puerto de Liverpool was founded by a French immigrant in Mexico named Jean Baptiste Ebrard, who sold clothing, garments, and fabrics imported from factories in France. Most of the merchandise would come from France through the port of Liverpool. The simplifying phrase “merchandise coming from the Port of Liverpool” entered the language, and is the origin of the company name. At the beginning of the 20th Century the decision was made to build a large department store one block from the main square in Mexico City. The building was later torn down, and on the same plot of land those who inherited the company opened another store in 1930, which continues to operate today. In the late 1940s the owners decided to concentrate on retail, in a defining moment for the company. A decade later, they opened their first store beyond downtown Mexico City, in the area of Insurgentes. Later, in 1964, the company went public, becoming listed on the Mexican Stock Exchange. This began a slow expansion, and in 1980, the fifth store project was opened in Perisur, which was an entire shopping center. The exploitation of commercial space and shopping centers offered new opportunities to the company, and today we have stores in almost every state of the country as we grow in step with Mexico’s middle class. In fact, in 2014 we will open up our 100th store in the country.

What have been the most significant acquisitions for Puerto de Liverpool?

In the late 1980s, the company bought a significant stake in the Fábricas de Francia store chain. And in the early nineties, we secured 100% ownership of that company. Subsequently, we have purchased a few small regional chains such as Las Galas in the southeast of the country, which had nine stores back then. We then purchased the Salinas de Rocha department stores, which had been bought by Electra some months earlier. Those were significant acquisitions, and subsequently we experienced aggressive organic growth, opening stores nationwide. We have 22 Fábricas de Francia stores and 76 Liverpool stores today.

Could you expand on your activity in the real estate and financial sectors?

Following our success with the Perisur shopping center, we decided to build more establishments. This is an important business for the company, and we have 20 shopping centers that we own outright, or in part, but we manage them because we feel that this is the only way to sustain the desired level of maintenance. At the same time, we have always provided a credit card business, but it has grown consistently over the past 15 years, becoming an important contributor to Company profitability.

What have been Puerto de Liverpool’s most recent major investments?

We have invested heavily in technology over recent years. Without this, we would not have been able to sustain the growth we have experienced over the past few years. We made the decision to operate integrated systems, and today we have a full suite of SAP systems that work together well. We made a significant investment in Queretaro, and opened a large store there with a sales area of about 260,000 square feet. It is still in its infancy, but so far has been a positive experience, and is a part of our nationwide expansion. We also have important investments this year in the cities of Toluca and Puebla, where we are set to open two large stores surrounded by two regional shopping centers.