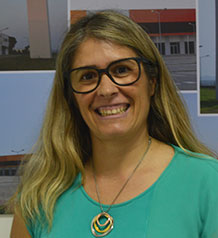 Carla Borges was born in Mozambique but grew up in Portugal. She studied Civil Engineering at the Instituto Superior de Engenharia de Lisboa, and holds a postgraduate diploma in management from the Universidade Católica Portuguesa. Before joining Opway Moçambique she held a range of positions in Teixeira Duarte, Edifer, and Elevo. Carla has been the Executive Director of Nadhari Opway Lda since January 2014, and is one of the few women involved in the construction sector in Mozambique.

Share on:
"Mozambique already has skilled professionals, although the country faces some challenges related to education."

Can you give us an introduction to your company’s evolution in Mozambique?

We have been in Mozambique for over 25 years as Opway Moçambique. The parent company is a Portuguese company called Opway Engenharia SA, which is almost 90 years old. A quarter of a century ago, they came to Mozambique to set up a company under the Mozambican law, and have remained here since that time, transferring experiences and knowledge from Portugal to Mozambique. The company has overcome enormous challenges. In October 2014 Opway Moçambique Engenharia Lda was acquired by Nadhari Lda, a company incorporated under Mozambican law. At the moment we are stable and 100% Mozambican. After this purchase we named the company Nadhari Opway. This change has led to considerable growth, development, and restructuring in the company, something which I have been spearheading for two years now.

What are the projects planned for the next three to five years?

We have a strategy to grow based on sustainability. More important than turnover, our target is profitability. We have some target projects, such as supporting the country’s need to satisfy the demand for housing for the under privileged, infrastructure projects, water supply, sanitation, and road building. Our focus areas are in line with the development of the country.

We work with both the government and private sector, in almost equal shares. Government projects are usually higher in terms of turnover figures, sometimes even 10 times larger than those of the private sector, so generally we focus on obtaining those contracts.

In terms of sanitation and infrastructure, are you focusing solely on Maputo or on other provinces in the country, too?

At this moment our projects are based in Maputo, Inhambane, Gaza, and Tete. We are also reactivating a site in Nacala, and have plans to move to the north of the country as well as to take advantage of the opportunities created by large FDI projects. For now these are the regions where we are working with greater intensity.

What are the main differences between working in Maputo and the rest of the country?

The main difference is logistics. Around 90% of companies are based in Maputo, so everything that happens outside is difficult to coordinate. We are in a restructuring process and are gradually solving these problems. Over the past couple of years, after the restructuring process that we undertook, the first project we won was in Tete. Currently, we have three ongoing projects in Tete. One has been completed—we completed a shopping center called Centro Shopping Tete—and we now have two additional, smaller projects with Vale.

One of the main concerns we note when we interview managers is human resources. What is your experience of recruiting, training, and maintaining your staff?

Mozambique already has skilled professionals, although the country faces some challenges related to education. As a Mozambican company, it is our duty to offer this support. We believe that our company’s workforce should be Mozambican and, as a result, we provide training to those who want to expand their skill sets. To perform contracts outside of Maputo, we rarely take professionals from here, opting to always try to hire locally instead. One project for this year is to incorporate interns here at the company and give them an opportunity to work with us. Since I arrived, we have hired six interns and they have all stayed with us. In total we have a 160 staff members.

Since last year we have seen an impressive amount of new buildings springing up around the city. Do you fear that there is a bubble?

This could happen in Maputo with high-end apartments. We are focused on housing for the less privileged, and at that level the risk is smaller. We target mid- and low-level housing projects that have high potential in Maputo, but also in other provinces. A large project for the near future in Maputo is the development of the Katembe district, which is something that we would be interested in participating in.

What sets you apart from your competitors?

No other construction company has an African woman in the leading position, which also reflects the nature of Opway and Nadhari Opway’s culture, regarding internal and external relations, including leadership, flexibility, delegation, and collective definition of objectives. We are 100% Mozambican, even though we have strong connections with Portugal. We want to help our country grow. We have all the know-how of an established Portuguese company, combined with local knowledge of the market.

How would you describe the business environment in Mozambique?

People usually think Mozambique is a simple place to do business, but it is not. It is easy to enter the market once you know the laws and rules. The market is very demanding and competitive, so it’s important to be aware of the regulatory framework, to focus on business, and to work really hard to obtain results.

Can you name some of the most significant projects carried out by Opway in the country?

We have participated in the construction consortium of the Tete Bridge. We have also built the Mocolumba Bridge in Zambezia, as well as the Xai Xai Bridge. In terms of the education segment, we have completed a university school in Gaza, a secondary school in Moamba, and more than 20 rural schools in Niassa. Also, we recently finished the Centro Shopping Tete for Pylos and we expect to participate in the construction of more. In Tete, we finished the Moatize multisport facility for Vale. We are now working on the revitalization of the Inharrime Bridge, and in Maputo we are building a 16-floor, 20,000sqm building for the INSS. In terms of infrastructure we have worked on the rehabilitation of the EN221, Lots 1 and 3 of Namacurra/Nampevo and Alto Molócuí¨/Rio Ligonha, respectively, in Zambezia, and 114km of the EN1 Incoluane/Chicumbane project in Gaza and on urban sewage works in Mocuba in Zambezia.

Our goal is to reach around approximately $30 million in sales turnover in 2016. We also aim to hire more people, and eventually reach 200 workers.