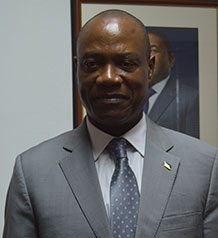 Down on the Farm

Share on:
"In Mozambique, the majority of people living in rural areas are living off agriculture."

What strategies has the Ministry of Agriculture and Food Security implemented to promote local and foreign investment in the agriculture sector?

The government is in the process of implementing both its agriculture development strategy and agriculture investment plan. With the new cycle of government, over the coming five years our development strategy will aim to increase production by expanding productivity in agriculture. We want to consolidate what we have done with products where we have already reached self-sufficiency, such as maize and cassava. We have plans to become self-sufficient in other products over the next five years too, and for that a certain level of public investment will be implemented, particularly related to infrastructure like roads and bridges, as well as investment in energy supply to the emerging agricultural industry. Our key goal is to follow through on a sustainable agriculture development strategy. We have developed a package of fiscal incentives and more favorable duty regimes for agriculture. Most imports of agricultural equipment, such as tractors and pipes for irrigation, will be duty free as part of this policy. Spare parts for those goods will face low levels of taxation, and throughout the six agriculture development corridors we plan to develop agriculture duty free zones to make the country more attractive in terms of investment. We want to transfer that experience to the other agricultural corridors, as investors will be more attracted to investments with low taxation for farming imports and the export of agriculture products.

What role are women playing in the agriculture sector and how can they be provided with more access to finance for agriculture?

In Mozambique, the majority of people living in rural areas are living off agriculture, and the majority of these people are women. There are different lines of credit for agriculture farmers designed to empower the small farmers, so if a man or a woman applies for credit in a given bank in which we operate the soft loan system for agriculture, the priority will be given to the woman’s project. Each year the president gives an award to the champions, and this year’s champion was the women’s association in Zambezia province. This was the general award; however, we also have a special category for women, youth, scientists, and field extension work.

What agricultural commodities hold the most potential for foreign investment in Mozambique?

How would you describe the evolution of sugar and cashew nut production in the country?

The sugar industry of Mozambique is advancing rapidly. It is a responsible kind of investment in the country because there is a real smart partnership in which private commercial investors come to invest in sugar and produce sugar cane directly on the farm, but they operate with the local chief and local community on a contract basis who then sell to the industrial interests. It is a successful system, and with sugar there is an incentive as we produce enough sugar for our needs but have a free market system to make sure that our sugar will be competitive. Anyone is free to import sugar as long as they pay the 2.5% import tax, meaning you can buy it cheaper locally.

What are your expectations for the country and for the agriculture sector in Mozambique?