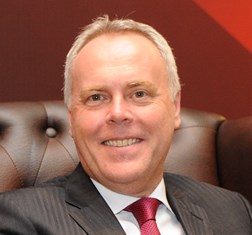 Andrew Sill was appointed as the new Head of Commercial Banking of HSBC Malaysia in 2016. He joined HSBC after working at the Royal Bank of Scotland (RBS) in Malaysia, where he was CEO from 2008-2016. At RBS, he held various other roles in Asia Pacific, including India, Singapore, and Malaysia. He is currently Chairman of the British Malaysian Chamber of Commerce. Originally from the UK, Sill has a BA (Hons) from Birmingham University.

Share on:
BMCC was set up for British companies to network and share best practices, though it has since evolved to focus on creating new synergies and boosting investment links between the two countries.

How do you assess BMCC’s contribution to supporting the British business community in Malaysia?

ANDREW SILL BMCC has been part of the Malaysian economy for 56 years. During that time, the chamber has evolved and developed to ensure it remains relevant to both economies and its members. Currently, we have 270 members, and two-thirds of them are SMEs. We provide connectivity and work closely with the Department for International Trade of the UK government in terms of promoting investments. We provide research analysis of the Malaysian market and economy and identify potential B2B partnerships. We also run signature events, such as our big annual Christmas luncheon.

What is the philosophy behind BMCC’s Business Excellence Awards, and how does it foster the development of SMEs?

JENNIFER LOPEZ One of our biggest recent accomplishments was the launch of the Business Excellence Awards. The driving objective behind establishing the awards was to create an appropriate opportunity to profile and acknowledge the significant investment links between the two countries. In 2018, we received an amazing response, with over 400 attendees including two ministers, and tremendous media coverage. The BMCC acknowledges the Malaysian government’s emphasis on SMEs as the growth engine of the economy going forward. We aim to support SMEs by providing more competitive playing fields and avenues for expansion.

What is the idea behind the recent establishment of various sector committees?

AS We sought to provide a forum for our members to share knowledge, insights, and concerns about their industry. The most logical sector to start with was the energy sector, given the heavy role of oil and gas in Malaysia’s economy. We received great support from the British High Commission and enthusiastic feedback from both our members and external companies that were pleased to be a part of it. There is engagement with the relevant ministries and large domestic players, which has contributed to the success, and we have built on that quickly by looking at other sectors. Education came up as a logical choice; around 35,000 Malaysian students are studying in the UK, and in recent years a number of British institutions have established operations in Malaysia. Four commissions have been established so far for advocacy, energy, education, and technology. The education commission will be split into a higher education and secondary education commission, as the issues they face are fairly different.

What is the scope of services you provide to your members?

JL We provide four pillars of services. The first is the B2B element, which includes our social, commercial, and business focus events and our powerful network. Second, we increasingly focus on the business to government aspect. Through our sector committees and advocacy working group s, we identify issues and bring them forward to policymakers. Number three includes the trade services supporting British trade and investment into Malaysia. We are increasingly looking at supporting our Malaysian members that seek to make investments in the UK. We work closely with the British High Commission and Department for International Trade.

How do you assess the ease of doing business in Malaysia for UK investors, and where do you see investment opportunities going forward?

AS Malaysia is one of the more open economies and embraces FDI. Generally, the economic environment and incentives provided by the government are fairly impressive, which is reflected in the interest from British companies. The electrical and electronics industry has been and will remain extremely important to the economy, and the halal industry and automotive innovation are emerging strongly. Another opportunity lies in infrastructure development, which will provide opportunities for the construction and services industries. One thing that underpins all the sectors is digitalization and Industry 4.0. This is where British companies have the strength to offer their professional services.