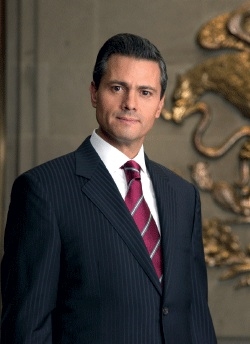 Enrique Peña Nieto holds a Bachelor’s degree in law from Universidad Panamericana and a Master’s degree in Business from Monterrey Institute of Technology and Higher Education. Early in his career he held a number of positions within the State of Mexico’s government, including Sub-Secretary of the Interior, Administrative Secretary, President of the Directive Council of Social Security, President of the Internal Council of Health, and Vice-President of the National System for Integral Family Development. In 2003 he won election as a State Deputy in his hometown of Atlacomulco. In 2005 he became Governor of the State of Mexico. He was sworn in as President of Mexico on December 1, 2012.

Share on:
HE Enrique Peña Nieto, President of Mexico, on the momentous reform of Mexico's energy sector.

I acknowledge the Senators and Federal Representatives of the 62nd Legislature, together with the members of state legislatures, for saying yes to an historical Reform that is fundamental to the future of all Mexicans.

It is a reform that will allow the country to embark on a new stage of development.

I also congratulate you for having proven that Mexico can be transformed under the democratic system, and that profound changes can be achieved by institutional means.

“President Peña Nieto’s ongoing attention to matters, domestic and foreign, has kept him on the road.”

With responsibility and political civility, and thorough legislative work, you succeeded in creating an advanced legal framework that will convert our energy sector into a real source of economic growth.

This is one of the most significant reforms of the past five decades, and one that means Mexico is better placed to face the challenges of the twenty-first century.

It is a reform that maintains and secures national ownership of PEMEX, CFE, hydrocarbons and oil revenues, while opening up new opportunities for the country.

With this reform, PEMEX and CFE are strengthened and modernized.

They will be efficient, productive state companies with the capacity and flexibility they require to fulfill their mission for the benefit of Mexican society as a whole.

The workers of these two pillars of the national economy may be reassured that their labor rights have been safeguarded and will be fully respected.

For those working in the energy sector, the reform will lead to more and better options for career and professional development.

It is a transformative reform tha modernizes the constitutional framework to open up the energy sector to investment, technology and competition, leading to more energy for the country at a lower cost.

With this decision we can exploit, for the benefit of all Mexicans, the abundant hydrocarbon deposits that so far have been inaccessible, or not profitable, for PEMEX, such as those in deep water deposits, or shale gas.

With the reform, the country will obtain more financial resources from the private sector, along with cutting-edge technologies, in order to exploit its vast energy resources without falling into debt.

Thanks to the reform, we will increase production of oil and gas, and achieve rates of replacement of proven reserves of over 100 percent.

But most importantly, the reform will allow Mexico to grow faster, creating development opportunities and employment for hundreds of thousands of Mexicans.

The Energy Reform will raise the productivity and competitiveness of the entire national economy. Businesses,especially small and medium enterprises, which are those that generate the most jobs, will enjoy more and cheaper energy; as a result they will be more profitable, and will be able to expand and hire more people.

The reform will thus provide a particular boost to local and national business. Mexican companies will be a crucial part of the energy sector’s production and industrial chain.

The supply of skilled labor will grow and there will be more job opportunities for engineers and technicians trained in our country’s universities.

Another aspect of the great significance of the Energy Reform is that it will support the economy of Mexican families by reducing the cost of electricity and gas. This means it will have a direct benefit for households across the nation.

How will this be achieved? With more investment.

It will be possible to extract more gas, making it cheaper for Mexicans. At the same time, this gas can be used to generate electricity at a lower cost, thereby lowering utility bills.

The reform will also lead to better food prices. With a greater supply of petrochemicals, more fertilizer can be produced in Mexico, reactivating farmers’ fields and food production.

Another key point is that the reform will help us to produce cleaner energy and be more environmentally responsible.

In the same vein, it establishes mechanisms to facilitate the deployment of renewable energy and cogeneration.

Thus, the Energy Reform will help us to reduce our emissions of greenhouse gases, in line with the objectives of the General Law on Climate Change.

The reform incorporates a long-term perspective in establishing the Mexican Petroleum Fund for stabilization and development. This purpose of this financial instrument is to receive, manage and distribute oil revenues, with both the present and the future of Mexico in mind.

Its priority will be to accumulate resources for future generations and to enable the country to cope with difficult situations.

At the same time, the fund will promote national development through the financing of projects in science, technology and innovation, infrastructure, scholarships, renewable energy, and a universal pension system.

This means that the wealth and heritage of Mexicans will be protected and nurtured.

The income derived from oil, which is a non-renewable resource, will be invested in new sources of wealth generation, namely education, science and technology, infrastructure and public savings.

In the energy sector there will be greater transparency and accountability. For example, any contract issued by the state for the exploration and extraction of oil and natural gas may be consulted by the public and be subject to audit.

The reform strengthens state regulatory bodies such as the National Hydrocarbons Commission and the Energy Regulatory Commission, providing them with a legal personality, technical and managerial autonomy, and their own budget.

In short, thanks to all these benefits the Energy Reform is a decisive step towards a better life for all Mexicans.

When I assumed office as President, I said that, at some point in their history, the most developed nations decided to take a big step forward.

This year, we Mexicans have decided to overcome myths and taboos to take a big step forward. Through its democratic institutions, Mexico has declared itself in favor of change and transformation.

With this reform we send a clear and decisive signal that in the twenty-first century Mexico is changing for the good of all Mexicans. This is already the view from abroad.

For example, yesterday a leading institution providing information on financial markets, Standard & Poor’s, raised the rating of Mexico’s sovereign debt. One of their leading considerations was the watershed represented by our country’s Energy Reform, which raises expectations of growth in Mexico over the medium term.

This analysis confirms the confidence there is in the prospects for the Mexican economy and the positive impact of these transformative reforms.

Thus begins a new story for our country. We have opened the doors to a better future for all.

It is time for the country’s energy resources to be a real factor for growth, one that is felt and observed in the daily lives of our people.

I firmly believe that all the reforms approved by the country’s legislators will mark a new chapter in the history of Mexico. A chapter of changes and transformations for the benefit of all Mexicans.

Extracted from a speech on Mexico’s energy reform given in December, 2013.