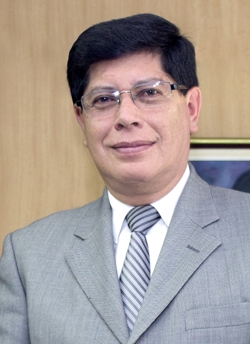 Marco Gustavo Calvopiña Vega is a chemical engineer, with special expertise in refining. He graduated from the Universidad Central del Ecuador, and went on to complete a Master’s degree in Business Administration with a focus on finance, at the Instituto Centroamericano de Administración de Empresas (INCAE) in Costa Rica. He has held a number of management and technical positions in the petroleum industry, including periods as General Vice-President of Petroecuador, Head of Production at the Shushufindi Industrial Complex, Assistant Manager of Operations for Petroindustrial, and Manager of Petrocomercial. He has offered consultancy services to the Ministry of Non-Renewable Natural Resources, the Presidency, and the Directorate of Petroecuador. In addition, he has been involved in major projects such as the construction of the Pací­fico and Amazonas refineries.

What is the role of Petroecuador in Ecuador’s efforts to transform the energy and production matrices?

We play a key role within the energy sector, as part of the decision-making process, and we provide advice on the business to the public authorities. Ecuador currently imports large volumes of diesel for power generation. Once projects like the Pacific Refinery, in which we also play a substantial role, are on course, Ecuador will become self-sufficient in diesel for its industrial needs. We are also involved in efforts to change consumption patterns in terms of electricity and gas, areas in which Petroecuador also has several projects. We also have close ties with other economic sectors to better assess their fuel needs. Petroecuador not only produces fuels, but also many other products such as asphalt, an essential element in the large infrastructure projects the country is set to implement. Again, we have close ties with public authorities and the relevant ministries in order to better orientate our projects and business activity toward the main objectives of the government.

What analysis has the company made in terms of producing and marketing alternative fuels such as ethanol and biodiesel?

We have conducted technical analyses and studies in order to start biodiesel production. Technically speaking, we are ready to produce biodiesel, but this is not a decision we can take unilaterally, as it also requires infrastructure such as service stations, and the vehicles need to be prepared for this type of fuel. Currently, Ecuador produces palm oil, which is transformed into biodiesel, and so far there is just one biodiesel producer in the country. However, a tariff scheme has to be set up. In the meantime, we already produce several types of fuel such as fuel with ethanol. Over the final months of 2014, we will be providing this type of fuel to all of the Guayaquil city area and we plan to expand nationwide. I should also note that for us to fully cover the Ecuadorean territory with such fuels, we require substantial sugar cane production.

How has the restructuring of Petroecuador made the company more efficient?

This restructuring, which also involved Petroamazonas, took place a year and a half ago. It has been a positive decision for both companies. Before, there were two companies engaging in duplicate activities: production and exploration. The restructuring implied greater efficiency and more synergies. Petroamazonas has increased production and we have a stronger focus on the activities we do, namely, refining, logistics, distribution, and supply of hydrocarbons.

How important is the Pacific Refinery project for the national economy?

Ecuador produces 550,000 bbl/d of crude oil and the national refining capacity only reaches 175,000 bbl/d. The remaining production is exported, and we import industrialized products such as diesel, gasoline, and LPG. One should bear in mind that the gap between exported oil and imported products is significant. We have a strong dependence on fuel imports. The Pacific Refinery will redress this situation, augmenting the economy and boosting development of the whole country. This refinery will also help us to improve the quality of our fuels. It should become fully operative within five years, as key steps have been taken over the past few months. Our company and the country itself are making large investments in infrastructure and other projects such as the storage and transporting of LPG. We also have ambitious projects regarding the storage and handling of diesel and gasoline, as well as petrochemicals, including several key pipelines and oil distribution centers. We have invested in the latter areas over the past few years to make our infrastructure more efficient. We are also modernizing and making much more efficient use of infrastructure at the Esmeraldas Refinery. At this facility investment is exceeding $1 billion.