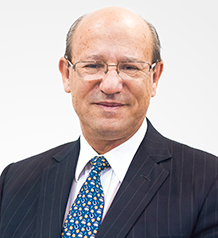 Constantine A. Galanis received both his Bachelor’s degree in Environmental Engineering and his Master’s in Business Administration from Rutgers University. He began his career as a consultant on international environmental and energy issues to Apollo Chemical Corp., and later became Commercial Director of Apollo Technologies International Corp. He has been the General Director of Quí­mica Apollo S.A. de C.V. since 1987.

Share on:
TBY talks to Constantine A. Galanis, General Director of Quí­mica Apollo, on its role within the industry and the future of Mexico's energy sector.

How important has your firm been in the energy sector over the past 30 years?

We set out by providing pollution control services to Mexico’s state power utility, Comisión Federal de Electricidad (CFE), and were instrumental in the reduction of pollution in Mexico City. We worked on the reduction of pollution from power stations, and then we went into refining. From there, we started petroleum production chemicals. Basically, we provide complete solutions to the energy industry in Mexico. We are involved across the entire oil production chain. We clean, dehydrate, and desalt crude oil, and we are also active in the processes of refining, transportation, and purification.

Which segment is the most important in revenue terms?

The important work lies in dehydration and desalting. Before we took control of the dehydration and desalination of the oil in Mexico, there were serious discrepancies between the Brent and the West Texas Intermediate prices as compared to the Mexican mix. This was due to the consistent bad quality in the delivery of oil from Mexico. We have provided solutions on a daily basis by reducing corrosion and increasing production in five of Mexico’s six refineries.

What are your expectations for the remainder of 2015?

This has been a record year for us. We have had thus far record sales, and the rest of the year is set to perform well. In the next year, however, we think it is going to be difficult because of the price of oil, though we expect that the dollar will stabilize and return to earlier levels.

What are the optimum means for international companies to enter the market?

Every country has its own characteristics and successes, though that does not necessarily guarantee success. It is imperative, therefore, to forge alliances with Mexican companies so that both bring assets to the table. Mexican companies bring valuable knowledge of the local market, while foreign firms are better placed to collaborate in terms of cutting-edge technology.

The first phase of the energy reform took place in July. What were your views on it?

The results were to be expected, as two out of the seven auctioned fields were awarded. Nonetheless, this marked a good beginning. There are many lessons for companies to learn from this first phase and there will be adjustments with a likely rise in subsequent participation. The remaining fields will not be abandoned. In five or 10 years from now, it will be clear that these reforms will bear meaningful results for the country.

You have requested information in the third phase of the Round One that will auction several mature fields. How attractive are those fields for Quí­mica Apollo?

We eventually want to collaborate with an operator and start production. We intend to develop a division of Apollo that is going to work with an experienced operator, which operates various fields outside of Mexico. We are currently in talks with two companies. These are mature fields, and that is the specialty of Quí­mica Apollo: to improve production and render a field profitable.

What opportunities do you envision in the downstream industry?

We are a leader in chemical treatments for oil and water, and there will be changes in that area in the future. Within the next few years there will be many players in distribution, transportation, and even certain production within the downstream business. There is a possibility of the construction of new refineries, as there are six refineries in the country owned by Pemex.

I am bullish about Mexico, and expect the country to overcome any difficulties that may arise. We believe Quimica Apollo will likely more than double our revenues and will have entered into new commercial territories, such as upstream oil production and petroleum and energy infrastructure.