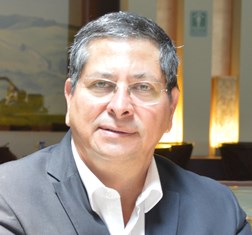 Director of the Northern Region, Calidra

Enrique Maldonado is a chemical and industrial engineer who previously worked for Danisco, a subsidiary of Dupont. He has overseen the northern region of Grupo Calidra, the largest segment of the company in Mexico, for over nine years. He specializes in process optimization and leadership.

How much of the market does Calidra currently encompass in Mexico?

Calidra Group has approximately 60% of the overall lime market in Mexico and 85% of the lime market in the mining sector. The construction market has a huge array of opportunities in infrastructure, especially in soil stabilization; however, it is not so easy as the infrastructure industry is being held back by a lack of investment from the private and public sectors. We are seeing a contraction in this industry not due to the economy, but the lack of political certainty. The mining sector is also being impacted, particularly from the risk of communities blocking the development of new projects. It is a high-risk investment

What industries are the most important for you in Mexico?

We have five important markets: mining, iron and steel, chemical industry, food, and building mortar. That said, we want to do more to promote the uses of lime for infrastructure such as roads, industrial parks, airports, and parks. We have worked with all the construction chambers and municipalities; however, it is hard to convince governmental entities to invest in lime since it makes projects more expensive, but it is an investment that saves money in the long term, as roads will require less maintenance expenses.

How much lime does the company produce in Mexico and Latin America?

In Mexico, our production capacity is 9,000tpd, and throughout Latin America the group produces approximately 12,000tpd. We do not have plans to expand our lime production in Mexico. We just postponed the construction of a new furnace in the northwest. That kiln capacity is supposed to produce 400 tons per day to supply the mining market. But the mining projects have been paused, and we suspended the kiln construction. The project is ready to get started, but we will continue with the construction of the furnace until we see the first signs of investment from our partners, such as Grupo Peñoles, Grupo Mexico, and Goldcorp. When they are willing to take the risk of their investments, we will take ours.

What strategies is the company using to diversify its portfolio?

The first strategy is exportation. Some part of the investment of the Calidra Group is in South America, namely Argentina, Colombia, Chile, Peru, and Honduras. If we do not do well in Mexico, we still have a balanced portfolio to rely on in the region. That said, we do not expect large growth in 2019.

What are your main priorities when it comes to international expansion?

We recently acquired Sibelco in South America, which mainly serves Chile. It is the main supplier of the largest copper producer in Chile, Codelco. There are also some large distribution centers in Chile that originate from Sibelco Argentina. A large portion of Sibelco’s market is mining, particularly in Chile, because there are no deposits to make lime of good quality there. Still, it is a great opportunity for us because the market is in dollars. Chile has a stable economy, and the crisis in Argentina is recovering, so that acquisition gives us the opportunity to strengthen ourselves in South America. Now, our vision in the medium term is to solidify or confirm our presence in Latin America and in the long term diversify throughout America. We plan to eventually enter the US market, especially the food industry, which requires higher quality standards and FDA, GMP, and HACCP certifications.