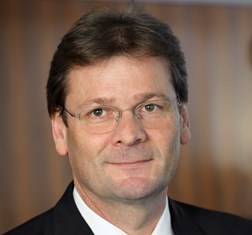 Erwin Kroell, an Austrian national, obtained a MSc Degree in Petroleum Engineering at the Leoben Mining University (AT). He is a petroleum industry manager with extensive international experience and started his career as a Petroleum Engineer with OMV in 1991; gaining experience in drilling, production technology, reservoir engineering, commercial and new business development in Austria before going international in the UK North Sea, Pakistan and Libya. From 1997-2003 Erwin worked as a Production/Operations Manager, Asset Manager in Libya. In 2003 he joined Wintershall where he worked as a Technical Director for Drilling & Reservoir Development for a Russian/German Joint Venture in Siberia/Russia before taking on a General Manager role for Wintershall in Qatar. In 2011 Erwin Kroell rejoined OMV and took over the role of the Senior Vice President for the Middle East & Caspian Region.

Share on:
“Demand for gas both in the UAE and the entire region is very high.“

Can you walk through the strategic relationship between OMV and Abu Dhabi and the steps that led to the USD1.5 billion purchase of the 20% interest in the concession of the Satah Al Razboot and Umm Lulu offshore fields?

The relationship between Abu Dhabi and OMV goes back to 1994, when IPIC (now Mubadala Investment Company) acquired a 19.6% of OMV shares, which today is up to 24.9%, making it the second-largest shareholder after the Austrian State. This was the start of a relationship that has improved and intensified over time, both in the upstream, where in 2018 we announced the signing of important offshore concessions, and downstream, where OMV owns 36% of polyolefin producer Borealis, a joint venture with Mubadala, which holds the remaining 64%. In the upstream segment, our close cooperation with Abu Dhabi, through IPIC, has grown from being an investment of the Emirate’s fund to actually doing business in the Emirate itself. As such, in 2007 we opened the first representative office and started to engage with ADNOC to determine how and where we could cooperate. After some years of engagement and discussion, we entered into the first Technical Evaluation Agreement for the appraisal and potential development of the Shuwaihat gas/condensate field together with Wintershall. The following year, we signed a second agreement for an exploration evaluation in the Al Ain area; in 2016 we did a third Technical Evaluation Agreement covering the Northwest Offshore region of Abu Dhabi, where together with Occidental we worked on the appraisal and development concept for sour gas out of a number of undeveloped gas, gas/condensate, and oil fields including Ghasha and Hail. A major step was the agreement signed on April 29, 2018, when OMV became a 20% shareholder of ADNOC’s offshore concession Umm Lulu, SARB, Bin Nasher, and Al Bateel. The concession fits perfectly into the OMV Upstream strategy identifying the Middle East & Africa as a priority region for our business, and its 40-year duration demonstrates our commitment to a long-term sustainable growth strategy together with ADNOC.

What is your perspective on ADNOC’s transformation and what are the implications of its new partnership model for IOCs such as OMV?

ADNOC is not the only national oil company (NOC) undergoing this process of transformation, as the developments of the energy industry are asking for both IOCs and NOCs to adapt and work more closely to apply the right technologies for creating increasingly complex oil and gas reservoir systems. This more direct approach can also be seen through its partnership model: ADNOC and other NOCs are forming strategic partnerships with their oil and gas off-takers, such as China, India, Korea, and Japan to secure access to those respective markets. Given these dynamics, it becomes increasingly important for an IOC such as OMV to both gain extensive knowledge of a market before entering it and carry out joint studies with potential NOCs it might partner with. What OMV has achieved together with ADNOC in the UAE is similar to what has been done with NOC in Libya, where we formed a successful strategic partnership many years ago. It is part of the business development cycle: before a player truly commits to investing in a certain asset or a certain country, it should first and foremost build relationships with its potential host NOC.

Where does Abu Dhabi still offer significant opportunities in the upstream segment?

Today, there is no more oil or gas that can be extracted easily, and while there is still exploration potential, it is most likely not to the extent of finding discoveries such as those made in the past decades. In Abu Dhabi, the major opportunity, which is also a challenge, consists of developing the more complex offshore sour gas in rather tight formations. Demand for gas both in the UAE and the entire region is very high and only applying advanced and fit-for-purpose technologies will help securing gas supply. It is thus clear that in the foreseeable future gas will play a major role in the energy mix of the UAE.

How do you expect the energy mix to evolve in the medium term, and what should the energy industry place particular attention to with regards to this evolution?

With the growth of global population, each country will have to meet the respective growth in energy demand through a diversified, more localized energy mix, whether it is through hydrocarbons—predominantly gas—coal, hydro, solar, wind, and nuclear. As such, attention should be devoted to how the change in the use of hydrocarbons and the progress in energy efficiency will impact economies. Today, for example, transportation accounts for the majority of oil usage: this will change, as the finite resource oil will be used more in the petrochemicals segment. On the gas side, a great deal of gas is burned for electricity, water desalination, or major industrial projects: this will also change, and we are likely to see a more diverse set of energy sources used for one asset. At the same time, there is a huge untapped potential in using energy more efficiently. Hydrogen will be important in the future energy mix to drive transportation. Another example is offered by using desalinated water more consciously since desalination of seawater is very energy intensive.