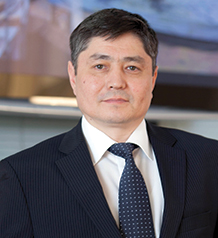 Azamat Bektybayev has 28 years of experience in the mining industry. Before transitioning to the Eurasian Group in 2004 he worked at the Belogorskiy Mineral Processing Plant, Kazakhstan Politechnical Institute, and Kunayev Institute of Mining Affairs. He graduated from Lenin Politechnical University of Kazakhstan, and defended his MA thesis in 1999, and his MBA in 2009 at the Lomonosov Moscow State University. He has over 50 scientific publications and 12 innovative inventions to his credit.

How would you assess Kazakhstan’s power and transmission infrastructure?

Kazakhstan’s energy infrastructure is well developed and will be developed further. For example, a transmission line to join the south and the north of the country is being considered. This will allow the north of Kazakhstan to transmit its power surplus to south and west of the country where power is in short supply. In my opinion, there are two projects with the greatest potential. One of them is Balkhashskaya power plant, which is going to be built together with a Korean company, and the second is a nuclear power plant, though the location is yet to be discussed. On top of that, ERG is considering construction of two power facilities, both with 660 mV capacity in the Pavlodar region.

Could you tell us about the ore assets you have? Is there any ongoing exploration of new deposits?

The company is paying a lot of attention to sustaining the resource base as one of the essential components of sustainable development. We signed a contract for exploration of the South Kempirsaysky field, where we are hoping to prove chrome deposits. We are planning on development of two of our iron ore deposits: Shubarkol and Sorsk. The project is now going through a construction design stage. Over the past 20 years, we invested about $11 billion in the development of the company, development of running projects, and launching new ones, such as 4th facility or new ferroalloy and electrolysis plant in Pavlodar. ERG is developing the Kacharsky mine project as well. We are now extracting 15-16 million tons of raw ore there, and are planning to increase this number to 20-23 million tons. To achieve that goal, we are setting up a cyclic-flow conveyor facility. We have set up a similar one, with capacity of 10 million m3 a year in Vostochny coal mine. ERG is now building the second part of the facility, and once the construction is over, the capacity will reach 20 million m3.

What are the processes that you integrate in the production to keep the margins high enough, especially given that ore prices are falling and production costs are growing?

ERG is a diversified and vertically integrated company. Most of the raw materials are produced within the country. In this way, we are able to redirect the resources to ensure that all the companies in the group are working consistently, wages are paid on time, and the employees are provided with benefits in a timely manner. Nonetheless, production costs are growing because of the materials we need to buy, such as diesel fuel and explosives. We are taking all the efforts to optimize expenses. First of all, that refers to all the explosive projects, as explosives are a key component to ore mining. We launched this project together with a few other companies working in explosive and drilling works segment. ERG is also actively cutting down on maintenance expenses. Foreign equipment such as Caterpillar, Hitachi, and Komatsu gets fixed using recovered spare parts within the framework of the REMAN project. We employed this scheme at one of the group’s companies and saved quite a lot. In terms of the entire ERG organization, the savings from REMAN can reach about $10 million. Apart from that, we are applying a scheme to save on oversized tires. Outsourcing oversized tires management at one of our companies will allow us to save up to 25% on purchasing such tires, and decrease expenses from $4 to $3 million. Outsourcing will also improve the quality of tire-lever services. We have also invited experts from Russia to conduct a technical audit of our railway infrastructure. The results of the audit are now being assessed within ERG. The company is developing a new technology for alumina production. Our bauxites are among the lowest quality sources for alumina production. Our aluminum branch is going through certain difficulties because of a price drop. To Kazakhstan’s government and ERG’s management credit, we managed to keep our aluminum business. In line with the government’s measures, the railway and power transmission tariffs were lowered. We optimized the output and cut off the expenses as much as possible, which allowed the company to survive in such difficult times, although, not without support from the other companies. To date, the prices have change and it improved the state of the aluminum business, it became profitable.