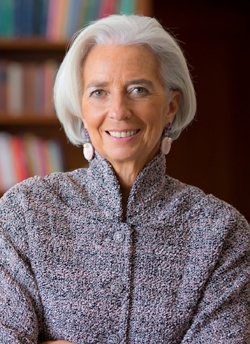 Christine Lagarde is Managing Director of the IMF. She was appointed in July 2011. A national of France, she was previously French Finance Minister from June 2007, and had also served for two years as France’s Minister for Foreign Trade. She also has had an extensive and noteworthy career as an anti-trust and labor lawyer, serving as a partner with the international law firm of Baker & McKenzie, where the partnership elected her as chairman in October 1999.

Share on:
"If the recent discoveries of offshore natural gas are commercially viable, they could generate significant exports."

The IMF’s 2009 conference on Africa was held in the context of a global economic crisis. Since then, how does a country such as Tanzania feature in the “Africa Rising” story?

When we got together five years ago in Tanzania, Africa’s economies were facing adversity as the global economy was enduring its most severe crisis since the Great Depression. When we met in May 2014 in Maputo for the follow-up conference, the narrative had indeed changed to “Africa Rising.” Obviously, difficulties encountered by countries such as Ghana and Zambia, or the Ebola outbreak in West Africa, are strong reminders that African economies continue to face many challenges and should continue to build their defenses against all sorts of shocks. But the changes over these five years have been dramatic. Africa’s achievements have been remarkable, and the overall outlook for the continent is optimistic. Growth is expected to average about 5.5% in 2014, and to remain strong in 2015 in Sub-Saharan Africa (SSA). Together with other countries in the East African Community (EAC), Tanzania has been very much part of this story: in the past decade, GDP per capita has increased by more than 50% (which is significantly more than the average for SSA); inflation has been kept in check; spending on social programs has increased markedly; macroeconomic stability has been preserved; structural reforms have been advanced; the standard of living has increased; and poverty has declined. Tanzania is an example of ongoing economic transformation for the region. Its exports now include the fruits of great progress in the area of manufacturing, including processed foods, beverages, cement, and textiles, just to name a few. That said, the fact that manufacturing still makes up only a relatively modest share of GDP, employment and exports in Tanzania also show that economic transformation requires the sustained implementation of reforms over the long haul. Tanzania needs to broaden economic reforms to make the economy even more resilient and to ensure that the benefits of growth can be even more widely shared among all Tanzanian people. The fact is that, like other countries in the region, poverty is still high and progress toward the Millennium Development Goals remains too slow.

What is your medium- and long-term macroeconomic outlook for Tanzania?

Tanzania’s economic progress over the past decade has been commendable. The country grew by almost 7% over the past five years, and it is expected to remain at the same level next year and in the medium term. The authorities have pushed for economic policies that have laid the groundwork for the country to transition from low-income status to become a middle-income country. Inflation has been controlled and is in line with the 5% medium-term objective. That is positive, given that the rate stood at almost 20% at the end of 2011. Having said that, there are some issues that need to be addressed. The key challenge is to meet both the government’s fiscal policy objectives of preserving space for increased investment and social spending, while gradually bringing the deficit closer to its debt-stabilizing level. This was further complicated in the last fiscal year when revenue fell short of the ambitious targets set in the budget, which led the government to contain spending to meet the deficit target of 5% of GDP. Tanzania now has a major opportunity. If the recent discoveries of offshore natural gas are commercially viable, they could generate significant exports and revenues during the next decade. Of course, further exploration is still ongoing, and none of the potential investors has yet made a final decision on the project viability. But if managed well, these resources can be used to address pressing social problems, provide jobs for the young and growing population, and also to build-up the country’s infrastructure. Of course, these are big “ifs.” We have recommended that the government establish a transparent framework for natural gas taxation and wealth management, because the idea is to foster long-term inclusive growth and ensure inter-generational equity.

“If the recent discoveries of offshore natural gas are commercially viable, they could generate significant exports.”

What is your assessment of Tanzania’s current macroeconomic policies?

The progress made by Tanzania so far is in many ways due to the government’s prudent policies. The five-year poverty reduction strategy (what Tanzanians know as MKUKUTA II), and the national development plan emphasize support for growth that will reduce poverty—agriculture and infrastructure—while preserving recent gains in social outcomes. We welcome the effort to spur the economy through dedicated plans such as the “Big Results, Now” initiative by accelerating the development of much-needed social and physical infrastructure. During the global financial crisis, monetary and fiscal easing supported by the government’s economic rescue plan helped mitigate the impact of the crisis. The Bank of Tanzania’s planned transition to an interest rate-based monetary policy framework should help keep inflation expectations in check. Looking ahead, the challenge now is to step up efforts to improve the policy framework, rebuild fiscal buffers, and push ahead with structural reforms in a variety of areas.

The IMF’s Executive Board recently approved a three-year Policy Support Instrument (PSI) for Tanzania aimed at supporting the country’s efforts to maintain economic stability and to reduce the country’s current account deficit. What actions must be taken by Tanzania to achieve these objectives?

Over the years, we have worked hard with governments in Africa to reform our lending instruments, and we have also tailored our policy advice to better address the very specific challenges facing the region. The PSI is designed for low-income countries that may not need financial support from the IMF, but seek to maintain a close policy dialogue with the IMF, including Fund endorsement and assessment of their economic and financial policies. The PSI signals the strength of a country’s policies to donors, multilateral development banks, and markets. Tanzania’s PSI, approved by the IMF Executive Board in July 2014, aims to support the government’s medium-term objectives. These include the two issues that you have mentioned; the maintenance of macroeconomic stability and the preservation of debt sustainability. Other objectives include the promotion of more equitable growth and job creation, two areas that are crucial to Tanzania’s future development and prosperity. With regard to macroeconomic stability, priority actions include strengthening public finance management in order to improve the efficiency and transparency of public spending, and the further broadening of the tax base to mobilize revenues and reduce aid dependence. In addition, the PSI is intended to strengthen the framework for monitoring and managing fiscal risks. Through these efforts, the program aims to provide the fiscal space to allow for spending on infrastructure and priority social programs. The government has identified infrastructure, education, health, and essential social services as priority spending areas for creating jobs and fostering inclusive growth. The program will also support efforts to ensure that potential revenues from offshore natural gas, which may start accruing in the 2020s if a large-scale gas project goes ahead, benefit all Tanzanians.

The growth rates of emerging economies that have been very active in the EAC region, such as China, are slowing down. What is the likely impact on countries in the region?

Weaker demand in emerging market economies, which has helped boost African growth since the global crisis, is a matter of concern, as it is for the rest of the world. It could adversely affect Africa’s commodity exports, capital inflows, and investment and growth prospects. The impact of slower growth in emerging markets and China in the coming years will be felt differently across countries. Those that are highly dependent on commodity exports and capital flows will likely be negatively affected. On the other hand, those countries with closer linkages to advanced economies may benefit from the change in sources of growth at the global level. To guard against the risks from an emerging markets slowdown, it is important that African countries tackle emerging vulnerabilities and implement policies that build up resilience to external shocks. This includes mobilizing domestic resources and strengthening fiscal positions in some countries, and seeking political inclusion and security in others.

Despite more than 5% average growth over 10 years, countries in SSA do not seem to be making progress in terms of creating jobs for their youth or reducing poverty and inequality. Why is this the case?

Let’s be clear. There has been progress. For example, the number of people living on less than $1.25 a day in Africa has fallen significantly since 1990. That is the result of the robust growth that so many countries have experienced. But extreme poverty remains unacceptably high. And you are correct that high levels of inequality persist. There are various reasons as to why there has not been more progress. Some countries are still facing internal conflict and are struggling to exit fragility. In the medium term, sustained strong and inclusive growth can make a difference. For most African countries, this entails higher investment levels, economic diversification, the removal of constraints to the business environment, and urgent reforms to support job creation. Looking ahead, there are a number of longer-term demographic, technological, and environmental challenges that need to be addressed. For instance, how can we tap into the productive capacity of Africa’s youth? How about the evident potential of technological innovations? And, how can we address the implications of climate change for our natural resources? In response, three policy priorities are crucial. These include: building infrastructure, building institutions, and building people. Good infrastructure—energy, roads, and technology grids—is a key foundation to any sustainable economy. Africa must also strengthen its institutional and governance frameworks in order to better manage its vast resources. And of course, the focus should also be put on building the capacity of Africa’s greatest resources—its people—with programs aimed at boosting health and education and other essential social services, particularly for the poorest in each country.