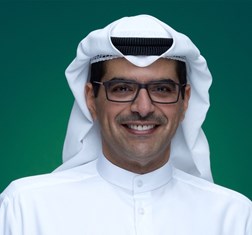 Mazin Saad Al Nahedh received his bachelor’s degree in business administration with a major in finance from California State University. He has also completed numerous specialized executive programs, including the General Management Program (GMP) at Harvard Business School. Alnahedh has been the Group CEO at Kuwait Finance House since 2014. In addition, he is Chairman of KFH Capital Investment Company and Board Member of Kuveyt Turk Participation Bank. Alnahedh possesses a vast banking experience, spanning more than 25 years.

Share on:
Established in the market before other banks in Kuwait, KFH has extensive experience and know-how but is looking ahead, with significant digitalization plans in place.

What was key to your success in 2018, and how did you significantly grow your loan book?

We operate in different jurisdictions, including Kuwait, Turkey, Germany, Malaysia, Bahrain, and Saudi Arabia. Throughout those locations, the growth trajectory for each economy is different. In Kuwait, we focus specifically on infrastructure projects, primarily in the oil and gas sector in addition to financing trade-related business. We provide most of the corporates with the necessary financing requirements when they import goods. In addition, we focus on the large corporate sector that has not been banked by KFH in the past. We take market share from other banking participants, which helps the general growth of KFH on the corporate and SME sides. On the retail side, KFH enjoys likely the largest customer base in terms of numbers; we are the second-largest bank in Kuwait and the largest Islamic bank. Our strength lies in our retail portfolio and the diversity of our deposit base. This is primarily driven by KFH being the only Islamic bank upon its establishment in 1977 up to 2003.

What factors differentiate KFH from its main competitors in Kuwait?

We have been in the market for much longer than the rest and have extensive experience and know-how in Islamic banking, as we were one of the pioneers driving that movement forward. We are the only Islamic bank that offers as part of our sustainable development goals and financial inclusion pillar female-only branches to cater to the needs of an important part of the population.

How is KFH adjusting its strategy to the new trend of digitalization?

The digitalization strategy started about three years ago. Each of our eight KFH business lines had its own system managing the same customer base; the same customer would reside in multiple databases without any links. We changed our system into a relationship-based approach rather than a product-based one and segmented our customers based on their business activity. On another level, we implemented robotics to reduce the process time for time-consuming applications such as onboarding. With our new systems, we reduced processing time by a third. We also made significant improvements to our mobile banking app that cover almost 90% of the services a branch can provide. We launched a concept called KFH Go, our new vision for what future branches should look like on a self-service basis. Those branches’ footprints are about one-fifth of the existing branches’ footprints, which drastically diminishes rental costs and overheads. This is a full-fledged electronic branch that does roughly 90% of what one could do in a branch. Printing of checks and instantaneous issuance of cards are services that will soon be available as well. We will have 10 electronic branches that we will be installed in 2019 and 2020 so that we can have 24/7 banking available to all our customers in key locations.

What sector will experience significant growth in 2019 and become of interest for KFH’s investments?

We are looking to finance the solar farm project built by KPC. There is also the solid waste plant that we are working on and hoping to close. Finally, there are plans for new cities in the north and south that will be developed through the PPP structure. We see those projects coming to completion rather than just being tendered; once complete, the infrastructure would be ready, the city will start flourishing, and activities will begin. In the oil sector, there are hundreds of billions of dollars’ worth of projects over the next five years that involve LNG and the improvement of upstream and downstream processes through the fourth refinery, which is one of the key projects that will be introduced. However, less government bureaucracy will be key in order to cut down on delays. Another main factor will be the urgency of completing the national plan; as long as oil prices remain above USD60, there is less urgency.