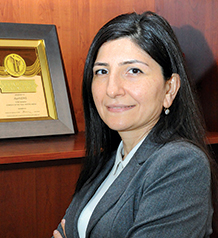 Sevil Mikayilova graduated from the Azerbaijan University of Languages. She has worked in the country’s media outlets for 15 years, and held the position of editor at the Azerbaijan State Radio and Television Broadcasting Company. She was also the Deputy General Director for International Broadcasting at the Trend news agency.

Share on:
TBY talks to Sevil Mikhayilova, Editor-in-Chief of AzerNews, on how the media company plans to expand its market share, and distribution methods.

The first European Games is taking place this June in Baku, making 2015 an exciting year for Azerbaijan. What has been AzerNews’s angle on the event so far, and what is your outlook on the Games?

The Azerbaijani capital is set to welcome 6,000 athletes from 50 countries to compete in 20 different sports at the Games. It will be a two-week sporting event overseen by the European Olympic Committee. We are closely cooperating with the Baku European Games Operation Committee, in particular its media organizer Synergy Partnership, to cover the long-awaited inaugural Games this June. Along with highlighting the major activities of the operation committee, we are also focused on large-scale preparations.

How will AzerNews differentiate their coverage from other media during the Games?

AzerNews is keen on covering the innovative Games, broadly taking into consideration overall interest. AzerNews has signed a contract with Perform Group, UK’s progressive sports media specialists, to broadcast the Games live, which will allow our readers to stay informed about all developments as they happen. Of course, we will work directly with newsmakers, post breaking news, and cover all sport disciplines, as well as present all the latest interviews in collaboration with the BEGOC team. We are also working with Trend News Agency on an exclusive video project.

What are some of the other important events upcoming in the next year that AzerNews will be focusing on?

The next most important event of the year we will cover will be the parliamentary elections scheduled for November.

We attach as much importance on marketing and distribution as we do with the quality of our newspaper content. In 2014, we considerably expanded our market coverage, and AzerNews is now available at every major hotel and business center. We were also able to expand the distribution of our newspaper through international news content providers, which translated into a surge in advertisement volumes. We are proud that our audience recognizes AzerNews as a newspaper with quality content, providing them with an objective insight into Azerbaijan.

Media is always innovating and progressing. To what extent has AzerNews developed in 2014, and what are your targets for 2015?

It was a big year for us in 2014. We made many innovations and worked hard to expand our audience. We were able to expand the list of our partners through reliable cooperation, and we launched many new projects. For example, following an agreement with Bloomberg, we were able to set up a special syndicated page. This was both an exciting development for our readers and our team.