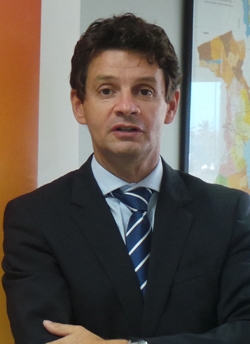 Paulo Mendonça has more than 20 years of experience in the oil and gas industry, having built his career working for Elf and Galp Energia. Throughout his career, he has held different positions in both the downstream and upstream businesses in Portugal, the UK, Malawi, and Mozambique. Paulo has a background in Business Management from the Catholic University in Lisbon and holds Master’s degrees in International Business and Management from the University of Westminster London and Development Economics from The School of Oriental and African Studies (SOAS) — University of London.

Share on:
"Galp Energia has been operating in Mozambique for more than five decades."

How would you characterize the partnership with ENI in the Rovuma basin?

Mozambique is one of Galp Energia’s core countries in terms of our E&P business, together with Angola and Brazil, which is the market where we have our largest asset base. Given the importance of this market for Galp Energia, we are delighted that the exploration campaign in the Rovuma Basin was an extraordinary one, and probably one of the most successful exploration campaigns in the industry over the past decade. We are therefore delighted with the outstanding work undertaken by the joint venture partners led by ENI as Area 4 operator. Given the significance of our operation in the Rovuma Basin, Galp Energia has been working in close partnership with ENI throughout the exploration campaign. Galp Energia is highly committed to the Rovuma LNG project and will continue to work with ENI and the other joint venture partners to make this outstanding project a success for Mozambique and all investing parties.

What does Galp do that makes it stand out in the field of exploration in Mozambique?

Galp Energia has significant deep-water exploration experience gained from ventures elsewhere in the world, particularly Brazil. In Mozambique, the exploration is also offshore deep water, so we are able to use the expertise that we have gained from world-class projects elsewhere to benefit our joint venture in Mozambique. In fact, part of the team that has worked in the projects in Brazil is now working for the Rovuma Project. Galp Energia has been operating in Mozambique since 1957, which shows the commitment the company has to Mozambique. As a long-term player in the country, Galp Energia has built a close, long-term relationship with Mozambique’s official institutions, which is a positive asset to the whole Area 4 consortia in developing this world-scale project.

“Galp Energia has been operating in Mozambique for more than five decades.”

How do you plan to develop the onshore and offshore infrastructure in the next few years?

Currently the Area 4 joint venture is looking at building two onshore 5MTPA trains and we are also evaluating the possibility and viability of building a floating LNG facility in order to anticipate production and revenues both for the government of Mozambique and the Area 4 partners, making use of the large resource base that was discovered in Area 4. We are currently working within the joint venture and with the Mozambique government, both in what concerns the onshore and offshore developments, in order to create the necessary conditions to get all the required approvals and develop the projects in a successful way for all stakeholders involved.

What are your thoughts on the petroleum law and the special regime option for LNG projects in the Rovuma Basin?

The recent changes in the legal and fiscal frameworks that were approved by the parliament are some of the most important developments of the last few years in the industry when it comes to specific legislation. The projects in the Rovuma Basin will require massive investments, which will be partly financed through debt. For the international financial institutions to be comfortable with investments of this size, it is critical that the legal and fiscal framework guarantees, amongst other things, stability, and creates a conducive environment for investment. The previous Petroleum Law focused on oil rather than gas and thus did not anticipate large gas facilities. While we are still reviewing the new legal developments, this law aims to promote new investments in Mozambique and will allow a new bidding round to take place. According to the government of Mozambique, this new law is in line with the current needs of the country but, like most regulations, there is always room for improvement. The special regimes for the Rovuma project is also a significant item of legislation that is crucial in enabling all stages of the Rovuma projects, both onshore and offshore. The special regimes aim to respond to the specific features of the Rovuma Project and to create the necessary conditions for its final approval, development, and operation throughout the concession period in conditions of economic viability and profitability.

How would you describe the significance of Galp for the socioeconomic development of Mozambique?

As I’ve referred before, Galp Energia has been operating in Mozambique for more than five decades and, throughout this period, we have engaged positively with the local communities where we operate. As Galp Energia, we try to make a contribution to the socioeconomic development of the country through two different channels. Within the Area 4 project, the consortia will build/rebuild infrastructure such as roads, schools, and clinics. The Area 4 consortia is also working closely with ENH to develop the study for the construction of a technological training center in Pemba to give both the local population, and Mozambicans in general, the skills they will need to be able to participate in the construction and operation of different facilities of the project. Beyond Area 4 activities, Galp Energia is assessing the implementation of a series of sustainable projects that will have a direct impact on improving the life of local communities. These projects will focus mainly on energy access and energy efficiency, as well as on training and education and will be implemented within the framework of the Mozambican officials institutions of each of the relevant areas.

How does Galp work to integrate environmentally friendly practices into its operations?

Galp Energia integrates all the industry’s best standards in everything it does and, obviously, in all matters related with safety and environmental policies. This comes as a matter of principle, but also stems from elementary good sense because in an industry such as ours, the costs of not putting environmental and safety concerns before everything else are simply too high to leave to chance. A reflection of these good practices is our regular presence in indices such as the Dow Jones Sustainability Index or the Global100 Most Sustainable Corporations selected by Canada’s Corporate Knights.

What is the significance of Mozambique for Galp’s overall strategy in Africa?

Mozambique plays a key role in Galp Energia’s overall operations, both in our upstream and downstream businesses. Apart from our significant investment in the Area 4 Rovuma Basin project, we are looking into other investment opportunities in the country. In that sense, we will be interested to analyze the possibility of expanding our asset base in Mozambique by assessing new opportunities that may arise in the next bidding round to be launched by INP. Galp Energia is also currently investing in downstream infrastructural projects such as storage facilities for liquid fuels and LPG. This will allow us to consolidate our position in the Mozambique downstream energy market and will also have a positive impact in terms of increasing the storage capacity of liquid fuels and LPG in the country. Our operations in Mozambique will provide a platform for Galp Energia to grow in the region, namely in neighboring countries. Our Mozambican operations will play a central role in our activities in the Eastern African region.

What is your 10-year outlook for the operations of Galp in Mozambique?

The new political cycle that will come with the next general and presidential elections will open up a long-term development opportunity for Mozambique. We strongly believe that recent political developments, including the newly approved amnesty law, will pave the way for another 10 years of sustained economic development, which we hope will bring social and human development for all Mozambicans. The Mozambique market will increase in importance for Galp Energia and we intend to increase and improve our linkages with the economy of Mozambique. We are investing in improving the technical capacities of our Mozambican staff and we are creating partnerships with several universities, both public and private, which will contribute to develop strong social connections with society in Mozambique. Developing programs in conjunction with Mozambican universities will foster the relationship between academia and the business community, which we believe is particularly relevant for both parties, and has proven to be a successful strategy in Portugal. We also have a strategic partnership with ENH that covers several areas of cooperation. As part of that cooperation program, last year we had eight ENH engineers trained at Galp Energia’s HQ in Lisbon for a one-year period in the E&P area, and we aim to make this an ongoing project. We want to continually consolidate and improve our collaboration with ENH, which is a very important part of our development strategy in Mozambique.