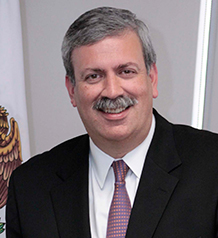 Francisco N. González Dí­az is the CEO of ProMéxico, and has led the country’s efforts to promote exports, attract FDI, and internationalize Mexican companies since June 10, 2013. González holds a degree in Business Administration from the Instituto Tecnológico Autónomo de México. He earned a Master’s degree in Administration from the Instituto Tecnológico y de Estudios Superiores de Monterrey and another in Business Administration from the University of Texas. His professional experience spans more than 20 years, and has been committed to the growth of the country. Among his activities in the private initiative, he was chairman of a company in the biotechnology and nutrition sector as well as the banking and finance sector.

What are your views on the energy reform, and how has it made Mexico a more attractive address for FDI in that sector?

For decades there were barriers to foreign investment in the Mexican energy sector. However, the recent energy reform opened up a large, attractive sector to foreign investors. This reform means that for the first time in over 75 years, private companies may participate in Mexico’s energy sector. The reform includes a new regulatory framework for the electricity industry, consequently opening up power generation and commercialization to third parties. Our country’s current legal framework gives certainty to investors and has bolstered FDI into Mexico. Citibank estimates suggest that as a result of the energy reform over $40 billion in foreign investment will arrive in Mexico between 2015 and 2019. In the midst of this promising panorama, there are four main opportunity areas in the Mexican energy value chain: exploration and production; refining and natural gas processing; transmission, storage, and distribution; and commercialization and services. Mexico’s energy sector is undergoing a major transformation. It was often regarded as one of the most closed energy sectors in the world; however, today we are one of the most attractive global destinations for investments in the industries that make up this key sector.

What strategies is ProMéxico following to internationalize Mexican SMEs and increase their competitiveness in the global market?

In addition to the well-known automotive, aerospace, and energy industries, what sectors of the economy have a stronger potential to grow in the mid-term?

ProMéxico’s focus sectors have a notable impact on the country’s competitiveness, job creation, capacity building for knowledge and innovation, and on the consolidation of Mexico as an indispensable link in global value chains. This also implies a focus on new opportunities. For example, in the agrifood sector Mexico holds a position of significant leadership. We are the top exporter of avocados, beer, and mangoes, among many other products; we are also one of the leading exporters of strawberries, green leafy vegetables, limes, peppers, and watermelons; in addition, we are the second-largest supplier to the US and the third-largest producer of processed foods in America. Another sector that has substantially increased its competitiveness in recent years is creative industries. Currently, Mexico is the principal exporter of creative goods in Latin America, and we possess the most significant pool of technological talent in the region; our country has become the most competitive destination in America for the development of software, video games, and multimedia, and as a result we are the sixth-largest exporter of animation and digital content in the world. One of the industries with multiple strengths is the health sector. On the one hand, the country has a number of export advantages when compared with other countries, and on the other, Mexico has become fertile soil for new productive investments. Mexico is also making advances in the medical tourism, medical devices, and biotechnology industries, to mention but a few. Mexico is the second-largest pharmaceuticals market in Latin America and a major producer as well. Currently, 20 of the world’s top 25 pharmaceutical companies have operations in Mexico, a presence that has increased in recent years. This makes the country one of the leading centers for the manufacture of pharmaceutical products in the world.