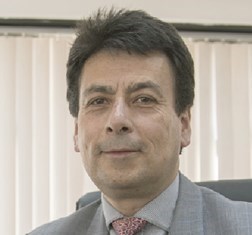 Fernando L. Benalcázar is a Civil Engineer with 27 years of experience in the national and international extractive industry. He is a graduate of the Catholic University of Ecuador and has a Master in Civil Engineering from the Federal University of Rio de Janeiro (Brazil). He is a Certified Professional in Industrial Safety in the United States (CSP). His professional experience has taken him to Syria, France, Canada, the United States, Oman, Venezuela, Brazil, Colombia, and Ecuador. He currently serves as Vice Minister of Mines with a clear vision of transparency and institutional efficiency, promoting the development of economically profitable, socially responsible and environmentally sustainable projects.

Share on:
“For 2020, we expect 500% growth and predict exports of over USD1.3 billion due to major economic groups starting business and the sector shifting to large-scale mining sites and production.“

How would describe the vice ministry’s scope within the mining sector?

In November 2018, after administrative changes to the cabinet by presidential decree, the sector was underrepresented and deserved higher prominence within the government’s agenda. The minister established the importance of the vice ministry and its significance. Since its creation, we have been one of the busiest vice ministries because of our constant travel to meet prospective investors and visit existing mining sites in what is expected to be the highest growth potential industry in Ecuador. To ensure the success of mining, we want it to include both major economic players and small artisanal mining sites or related activities. It is crucial that we properly regulate the industry setting the ground rules of operation and prevent illegal mining. Historically, mining has played a major role in the economic development of the country. In 2018, we exported up to USD278 million from mining products, and in 2019 we started large-scale exporting activity at Fruta del Norte and Mirador. We are defining the right mining policy and industrial regulation to develop the National Mining Development Plan and Mining Public Policy, which became official in May 2019. It serves as a roadmap for the industry’s development and is based on six main principles giving paramount relevance to two important concepts: social and environmental sustainability and prevention of and engagement against illegal mining. To attract interests from important markets, we need to comply with harmonious and sustainable policies set by the International Council on Mining and Metals (ICMM) and its 10 production principles. In addition, we pioneered the operation of state policy to orchestrate the joint work of all stakeholders to address the issue and work coherently and cohesively to combat these activities. We have defined our mining development plan and set the industry’s objectives toward 2030, enabling us to plan for the short- and long-term outlook of the sector. Besides our policy work, we also provide oversight of the other three mining institutions attached to the ministry: the Mining Control and Regulation Agency (ARCOM), the National Mining Company (ENAMI EP), and the National Energy and Geology Research Institute (IIGE).

2019 represented a major shift in the economic significance of mining. What impact do you expect from the shift from small and artisanal mining to industrial mining?

For 2020, we expect 500% growth and predict exports of over USD1.3 billion due to major economic groups starting business and the sector shifting to large-scale mining sites and production. To achieve this growth, many projects need to come fruition, such as the USD59-million Rí­o Blanco project, which was inactive in 2018 because of administrative and legal reasons. Looking at 2021, we want to grow our referential current value by seven times to reach USD1.8 billion, including the USD271-million Loma Larga project. These are existing or realistically submitted projects that we can forecast. There are many other potential projects in our pipeline, such as the Cangrejos project by Lumina, for example. Cangrejos could actually be the first project to open business with a 16-year production plan and potential of up to 256,000 annual gold ounces entering the list of the 32 largest gold projects globally. On the side of Cascabel by SolGold, we would set global standards by becoming a major global copper and gold producer and the largest or second-largest silver exporter in the world. That is our current outlook and deserving of the spotlight placed on it within Ecuador’s economic development planning. We are proud that up to USD300 million has been paid in royalties since 2015; this is proof of the confidence of private contractors and concessionaries in the long-term profitability and sustainability of their operations.

How is the vice ministry hoping to advance the national mining cadaster project to open new opportunities for mining players?

By 2020, we expect to complete the evaluation of the current state of the existing lands and permits in the national cadaster, thus allowing the institution to better manage mining rights and concessions. We have established strict requirements for interested parties to request and access mining rights and open businesses. We defined a 30-day window from the time of submission for the applicant to deliver all enabling documents for the application to be considered for approval, removing previous gaps that led to corruption in the process. Thus far, we have cleared 2,939 applications out 6,500 that did not meet the set standards or complied with the existing rule. The rest are ongoing processes that would benefit from the completion of the cadaster project. We are working alongside experts from the World Bank and non-refundable funding from the Interamerican Development Bank in the development of the cadaster platform and management of the industry’s activities. We hope to complete the opening of the cadaster and creation of its software platform by mid-2020 with a complete different set of procedures and rules with optimal world-class standards for all elements involved in mining development including, but not limited to, a strengthened tendering process and removing intermediaries in cadaster permit requests. For 3Q2020, we expect a mining round with our revamped system and policies to attract major players to invest in our country.

What message does the vice ministry want to send to the international economic community to promote investment in the sector?

It is increasingly evident that every mining stake holder is looking at Ecuador’s economic potential in the sector. From regulators to major players’ testimonies, everyone is aware we have evolved and improved the sector and the national investment landscape establishing high standards and clear investment ground rules for companies to come to Ecuador. From the ministry, our message is crystal clear: Every major player is considering investing in Ecuador’s mining sector today. The prime economic conditions are a reality in Ecuador right now. We constantly receive scouting trips from literally every top 10 company in the sector worldwide looking to invest in the country. More than an option or alternative market, investing in Ecuador is a must for the sustainable future economic growth of every major mining company in the world. We have established clear transparency policies with zero tolerance for any possible corruption and have removed all gray areas. The ministry has assigned a taskforce to work alongside all other stakeholders on the issues that fall out of our ministry’s scope to ensure a government-wide coherent policy working toward the same goals and based on the same strategy. The mindset and misconceptions of foreign economic investors have changed because we have changed, and we are ready and open for business. We are convinced that by 2030, mining will become the cornerstone of Ecuador’s economy, though we must make sure the industry’s development happens in sustainable terms and while preserving our environment and positively improving the livelihoods of Ecuadorians.