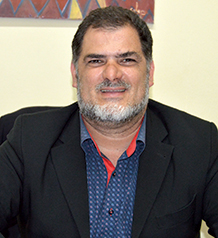 Mozambique-born and bred, Joío das Neves is a Mechanical Engineer, and has worked for more than 25 years in the private sector, in the tourism and automobile industries. He managed a leading car distributorship in Mozambique for brands such as Ford, Mitsubishi, and Man Truck and Buses for over 12 years. Over the past six years he has been devoted to implement from scratch the use of natural gas in vehicles in Mozambique. Due to his passion and dedication in this field today he is popularly known in Mozambique as “John of the Gas.“

Share on:
TBY talks to Joío das Neves, General Director of Autogás, on savings on consumer fuel bills, the advantages of natural gas, and setting up filling stations.

Autogás was created in 2008, but what was the motivation behind it and how has the company developed in the intervening years?

Autogás was created by a group of Mozambican entrepreneurs following a study confirming that the use of natural gas for vehicles in Mozambique was a viable concern. It is a PPP that from the public sector features the Institute for the Management of State Holdings (IGEPE) and state-owned petroleum product distributor PETROMOC, and from the private sector a consortium called INDICO ENERGIA SA. The initial days of Autogás operations were challenging as people, unaware of the potential use of natural gas in vehicles, were reluctant to change. Only after several years of proven experience with private sector public transportation with the so-called “Xapas” vehicles, the public began to have faith in the project. The project has a tremendous impact on the national economy by rendering transportation cheaper for the general public, while helping to reduce pollution.

What does the conversion of private commercial vehicle engines to natural gas utilization entail?

The conversion of petrol vehicles to CNG is simple and is basically done by inserting a T connection in the inlet pipe of the engine. This connection allows the supply of natural gas or petrol controlled by a butterfly valve operated by a switch activated at the driver’s discretion. By doing this the vehicle can run either on petrol or CNG, therefore allowing the vehicle to use CNG, while within the range of CNG filling stations, but continuing to run on petrol in other circumstances.

What are the benefits of such a conversion?

The immediate advantage of converting vehicles to CNG is paying only approximately 40% on fuel bills compared with petrol and enjoying between 50% to 60% savings. The advantages do not end there. Natural gas burns completely and therefore does not produce carbons that petrol or diesel engines do. This means that the maintenance periodicity on natural gas vehicles can be extended reducing the number of maintenance services over time and extending the life of the engine. Moreover, natural gas pollutes far less than other fuels. The savings on pollution are so high that certain cities today are only allowing natural gas vehicles in their public transport fleets to mitigate currently high pollution levels. In the case of Mozambique there is one extra reason for using natural gas, namely that as it is available and produced locally, by using CNG we are using our own fuel and substituting imported fuels with our own gas, which improves our economy by reducing the importation costs and ensuring greater control on fuel prices.

How many natural gas vehicles are currently in operation in Mozambique and how do you expect the number to evolve over the next five years?

The number of vehicles running on CNG in the cities of Maputo and Matola today is growing rapidly, and it is forecast that in 2020 approximately 30,000 vehicles will be using natural gas in Mozambique.

How many filling stations does Autogás have? What are your strategies to expand the station network nationwide?

Currently, Autogás has opened five CNG filling stations with a further 12 stations projected for the next five years. Mozambique has a fleet of about half a million vehicles, of which around 67% run in the greater Maputo area. It is, therefore, expectable that the focus of filling station network expansion will meet demand in this area and only then start gradually expanding throughout the rest of the country.

What types of partnerships are you looking for to further develop this project?

Autogás has achieved profitability with this project and is now looking to replicate the experience by expanding its filling station network to increase the business volume. This requires substantial investment and Autogás is seeking serious partners to share the opportunity. Affordable capital for investment is the main priority, but options for equipment leasing, or an optional share for strategic CNG equipment producers may also prove interesting.