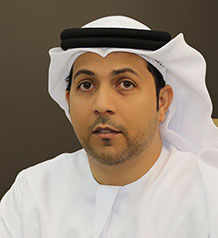 Tariq Saeed Allay is the Director of Sharjah Media Centre, the media and communication arm of the Government of Sharjah. He had previously served as Head of the Communication Department at the Sharjah Commerce and Tourism Development Authority (SCTDA) for 10 years. He received his bachelor’s degree in communication sciences from the University of Sharjah in 2005 and has since attended numerous training courses and workshops to refine his media and communication skills at the hands of some of the most skilled trainers in the world. Possessing a strong interest in sports, Allay has been a member of the Board of Directors of Sharjah International Marine Sports Club since 2014.

Share on:
'There has been a positive and perceptible change in Sharjah’s image.“

Sharjah Media Centre (SMC) is adapting to the Emirate’s rapid evolution. What are the main new developments at the Centre?

The government established SMC five years ago. Today, it has emerged as a single-window, unique platform that anyone could approach to know anything and everything about Sharjah, its government, institutions, the economy, government procedures, media, education, history, landmarks, or any other area. We have branded the Centre with a new logo and have a team of more than 100 qualified, well-trained professionals. We are also constantly looking to empower our staff by providing them with training and new skills so that they give their best in serving the Centre. We are in touch with other contact centres in the UAE and the region to help us with this. The Centre is also responsible for the PR and media coverage of His Highness the Ruler of Sharjah, both in the UAE and abroad. We have a dedicated social media account for the Ruler covering all of his events and engagements. In 2014, His Highness the Ruler of Sharjah inaugurated Al Majaz Amphitheatre, on an island created in the heart of the picturesque Khalid Lagoon. Al Majaz Amphitheatre also functions under the Centre and we hold a lot of our activities, cultural events, and world-class music concerts at Al Majaz, especially from September to May. We hosted the closing ceremony of the recent International Government Communication Forum (IGCF) at the Amphitheatre. FunFest, a 14-day sports festival for families, was also held there. With such events, we get to maximize the number of people using the Amphitheatre and they, in return, get to enjoy the facility and its impressive architecture. During the holy month of Ramadan, we organize the hugely popular Ramadan Majlis, involving a number of interesting sessions on culture, sports, media, and social media. We are currently working on the 2016 program. By the way, the Centre also runs the Sharjah Events website www.sharjahevents.ae using an app to showcase all the interesting activities, events, and happenings in the Emirate. We also act as the official media arm and spokesperson of the Sharjah government, and help with press and media interaction of its various departments. The Centre also hosts the Sharjah Press Club, which offers numerous facilities and services to members of media fraternity in the Emirate.

The Sharjah Media Center is the media arm of the government of Sharjah, and aims to promote the Emirate. How is the Centre working to achieve that?

We have built a good and rewarding relationship with other government departments and agencies in the Emirate and are constantly working with them toward the objective of acting as the media arm and platform of the government. For example, we liaise with the Sharjah Commerce and Tourism Development Authority to publish various statistics about the industry, such as the Emirate’s tourist numbers and museum visitor data. If the number of tourists visiting a particular area or attraction is seen as dwindling, then the Centre could focus on promoting it. We also showcase Sharjah and its journey of excellence and progress by sending out media releases to targeted markets overseas, from time to time. Of course, we are constantly working to strengthen our partnership with other stakeholders and present a positive image of the Emirate through our media interaction. Since the inception of the Centre, especially with the launch of the IGCF, which is attended by more than 2,000 world leaders and media personalities, there has been a clear, positive, and perceptible improvement in the way Sharjah is seen around the world and across the region. Sharjah 24 www.sharjah24.ae, which is the official news website for Sharjah, is also part of the Centre, keeping an eye on and reporting all that is happening across the UAE, the region, and the world in current affairs, politics, arts, and culture. The website is in Arabic and we are now working on its English version. Later, we may think about serving in other languages as well.

This year Sharjah hosted the 5th International Government Communication Forum with the slogan “Citizens for Prosperity.” What were the main highlights of this year and how would you rate its results?

The IGCF is all about enhancing government communication and this year we focused on improving communication from the citizen to the government. As His Highness Sheikh Dr. Sultan bin Mohammed Al Qasemi, Member of Supreme Council and Ruler of Sharjah, said in his opening address at the 2015 edition of the Forum, communication needs to be two-way, not just one way, from the government to the people. As part of this theme, we discussed various aspects of communication involving government and people, including in areas as different as aviation and culture, with experienced speakers from both the public and private sectors running the sessions.

What are your priorities and goals for 2016?

Every year we set ourselves certain objectives and activities that are aimed at supporting and working with other government departments. We need to take the next step now and have one centralized media entity in Sharjah. We are planning to meet with every media team of every government department at least every three months to see what their problems and concerns are and how to address them. We are working to produce one coordinated media calendar for Sharjah. We need to streamline the system. We also need to improve our call center so that it is open and accessible 24 hours. We need to make the Press Club more attractive and accessible to journalists as well by providing more services and benefits. We also need to expand the scope of the Ruler’s PR and media coverage beyond Arabic and English to other languages, especially when he travels abroad.