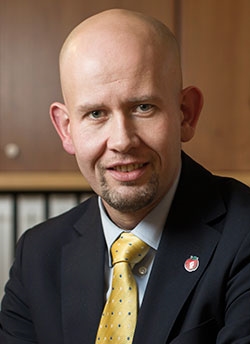 Minister of Petroleum and Energy, Norway

Tord André Lien was appointed Minister of Petroleum and Energy on October 16, 2013. He has been a member of the Norwegian parliament from the Progress Party since 2005. From 2009 to 2013 he served as Second Vice Chair of the Standing Committee on Education, Research and Church Affairs. From 2005 to 2009 he served as a member of the Standing Committee on Energy and the Environment. He holds a Master’s degree in History from the Norwegian University of Technology and Science.

Share on:
"In the European context, a low-hanging fruit for CO2-reduction is replacing coal with gas in power generation."

Norway and Abu Dhabi are both in a transitional state, diversifying their economies away from dependence on oil revenues. What similarities exist between the two regions with regards to this shift?

Norway and Abu Dhabi are both small countries, but large energy producers. Although the petroleum sector contributes significantly to the national economies, both countries also have a strong focus on renewable energy and carbon capture and storage (CCS). This is particularly evident when it comes to R&D in renewable energy sources. Norway has, together with Iceland, the largest share of renewable energy production—and consumption—in Europe. Nearly all of the electricity in Norway comes from hydropower. Norway and the UAE, with Abu Dhabi in the forefront, are both committed to reducing CO2 in order to mitigate climate change. The two countries collaborate in the major global processes to achieve this goal. It is also important to mention that just as there is no set expiry date for the oil age, there is no definite date for the realization of a society completely built upon renewable energy. The world needs more energy, and in every scenario, oil and gas will remain a crucial part of the energy mix for decades to come. When it comes to the government revenues from the petroleum sector, the largest part of the government revenues are saved in the Government Pension Fund Global. This Fund has been established in order to secure a sustainable management of oil and gas wealth, which gains both present and future generations. This secures the Norwegian economy from being dependent on petroleum revenues.

Statoil, Norway’s state oil company, is one of the top international oil companies bidding in Abu Dhabi’s main onshore oil concessions, as the historic 75-year operations agreement expired in January 2014. What is Statoil’s main value-added as a partner in operating the UAE’s biggest onshore oilfields?

Statoil is the largest operator on the Norwegian Continental Shelf and has over 40 years of experience in developing cutting-edge technology in producing both oil and gas. I believe that Statoil can add value to particularly three areas that are of importance to Abu Dhabi; increased oil recovery, gas production, and CCS. Increased oil recovery is important because it both represents enormous value and also ensures that natural resources not are being wasted. Statoil is already a world leader in increased oil recovery with an average recovery rate of 50%. Thus, they can contribute with important technology and experience. When it comes to gas, Norway sees an increased demand and production of this less emission-intensive fossil fuel. Statoil plays an important part in this development and is now the second largest supplier of gas to Europe. Abu Dhabi has a shortage of this energy source and I believe Statoil’s knowledge of developing sustainable gas value chains will be a useful contribution. Finally, when it comes to CCS, Norway and Statoil are front-runners internationally. For example, the world’s most advanced test centre for carbon capture, the CO2 Technology Centre Mongstad, is located in Norway with Statoil as the largest private partner. Statoil started with carbon capture and storage from the Sleipner gas field in 1996. Since then they have added three more successful CCS projects, two on the Norwegian Continental Shelf and one in the desert of Algeria.

“In the European context, a low-hanging fruit for CO2-reduction is replacing coal with gas in power generation.”

Abu Dhabi plans to spend over $60 billion in the next decade to expand its oil and gas industry and is looking to increase its sustainable oil production capacity from 2.8 million to 3.5 million barrels per day by 2017. What opportunities do you see for further collaboration and between Norway and Abu Dhabi in light of these aims?

As mentioned, the Norwegian petroleum industry has developed world-class technology and expertise. Increased oil recovery is one area that will be crucial in order for Abu Dhabi to reach its ambitious goals. Both Statoil and the world leading Norwegian supply industry can contribute with technology and expertise in this development. I would also like to mention that due to a strong CO2 taxation regime on the Norwegian Continental Shelf, the Norwegian industry has had a strong economical incentive to research and develop more environmentally friendly technology. This has led to operators and suppliers on the Norwegian Continental Shelf being world leading when it comes to producing oil and gas in a sustainable manner. I believe this fits with Abu Dhabi’s role both as a large energy producer and ambitions to mitigate climate change.

How do you view the role of Norway and Abu Dhabi in leading the transition toward clean energy technology and a more sustainable energy future for the decades to come?

The contribution of small countries like Norway and Abu Dhabi is mainly in the areas of research and technology development, in addition to promoting international cooperation. Both countries are undertaking focused efforts into this contribution and it is particularly evident when it comes to renewable energy and CCS. In this context, I would like to mention Abu Dhabi’s Masdar city as an ambitious initiative in the pursuit of developing sustainable cities. The fact that IRENA—the International Renewable Energy Agency—has its headquarters in Abu Dhabi is further proof of the ambitious renewable energy policies. Norway is the sixth largest hydropower producer in the world and the largest in Europe. Our hydropower development for more than 100 years has since long put us in a unique situation, and today approximately 65% of our total energy use is covered by renewable energy. Norway has even greater ambitions in this regard, and the Government Agency Enova is an important instrument in the government’s efforts toward more the climate-friendly use and production of energy. Areas of priority for Enova are renewable heating, energy efficiency, energy recovery, and industrial conversion to the use of renewable energy. Another important area is development and demonstration activities of renewable energy technologies. Abu Dhabi and Norway have made a strong commitment to the development of cost-efficient technology for CCS. CCS is regarded as one of the main tools for combating climate change. The need for CCS is well documented, and I am pleased to note that the latest report from the Intergovernmental Panel on Climate Change (IPCC) is clear on its importance. Indeed, the IPCC emphasizes in its fifth assessment report that the costs of reaching the two-degree target will likely more than double without CCS-technology. Thus, contributing to the technological development and cost reduction of carbon capture and storage is a central climate mitigation technology where smaller countries like Abu Dhabi and Norway can make a global impact. The Norwegian government presented a new strategy for CCS in its budget proposal for 2015. The strategy for our work on CCS includes a wide range of activities, including research, development, and demonstration, as well as efforts to promote CCS internationally. CCS is the only way some industries will be able to substantially reduce greenhouse gas emissions. I am very glad that the world’s first iron and steel project to apply CCS at large scale is under construction in Abu Dhabi, namely the Abu Dhabi CCS Project. In the European context, a low-hanging fruit for CO2-reduction is replacing coal with gas in power generation. Here Norway, and Statoil, plays an important part in providing gas to the European market.