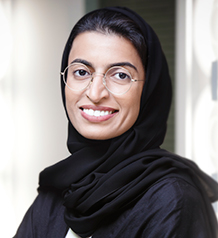 HE Noura Al Kaabi was appointed as the UAE Minister of State for Federal National Council Affairs as part of the cabinet reshuffle in February 2016. She is also Chairwoman of the Media Zone Authority – Abu Dhabi (MZA) and twofour54, a free zone that provides world-class production facilities, training, and business support services to Abu Dhabi’s growing media industry. Through her role as Chairwoman of MZA and her board membership of numerous organizations, she has worked to enable a new generation of creative leaders and ensure a sustainable media industry that contributes economically and culturally to the region.

Share on:
TBY talks to HE Noura Al Kaabi, Minister of State for Federal National Council Affairs & Chairwoman of the Media Zone Authority and twofour54, on economic diversification, film, and working with entrepreuners.

What about the current economic situation makes it vital to attract and develop the media sector as part of the economy?

At the 2016 World Government Summit, the Crown Prince of Abu Dhabi and Deputy Supreme Commander of the UAE Armed Forces, Sheikh Mohammed bin Zayed Al Nahyan, summed up our nation’s economic challenge when he said we need to be prepared to sell our last barrel of oil within the next 50 years. When you consider that oil is one of the major contributors economically, the statement highlights the need for diversification. Hence, Abu Dhabi’s 2030 diversification plan, a key pillar of which is creating a sustainable media industry as one alternative source of economic activity. twofour54 is helping the Emirate to become a media and production hub and is a catalyst for content creation in the region. When we look at the industry, we look at how we can develop it commercially, rather than simply being a zone where companies can set up an office.

What specific film markets are being developed here, and how is exposure generated into achieving international recognition?

We know that we will not be able to guarantee our presence without having international and regional partners. We really believe in collaboration and the power of partnership. I am an Emirati, born and raised in Abu Dhabi, and before 10 years of age there were mainly just cartoons, but then we started to see other content coming from the West, mainly, or Bollywood. Now, there is also Korean material coming in. And this is in addition to a growing demand for Arabic drama productions across the region. What are we doing to tap into all of this? The first thing is the 30% rebate incentive for filming in Abu Dhabi, to give the Emirate exposure to these projects. This works alongside our efforts to develop talent and build the services and auxiliary companies to support such productions. To help build the model for being a production hub, we partner with productions that come to Abu Dhabi. We are now linking Bollywood and Hollywood for the first time, because we are a meeting point. We recently signed a deal with O3 Productions, a partner of the MBC Group, to ensure more regional drama is filmed here. In addition, we have a sister company called Image Nation Abu Dhabi, which develops drama projects that are fully filmed in Abu Dhabi. This all helps in terms of building up a stronger engine for production here in Abu Dhabi and our efforts are paying off. We are proud to have successfully hosted a number of Bollywood movies, international television series and two of the world’s biggest movie franchises, Star Wars and Fast and Furious, all of which add immensely to our international reputation.

How is the zone helping entrepreneurs find a physical location and grow their company presence once they have set up?

We can have a new company set up in the zone in just three weeks with everything ready; you just plug and play. We offer different office space options to cater for the different needs of different businesses. Our government and travel services team provides all of the services that are required from that perspective, for example, if you have staff who are non-Emirati this is where their visas would be arranged. Our freelancer pool of over 490 people means that if you want to start a company and need certain skills, there is a diverse pool of ready resources already here at twofour54 to tap into. We also manage a program of networking activities to connect media companies with government entities and the private sector. Ultimately, our dedicated client management team ensures that twofour54 media companies have the support they need to succeed and grow with us in Abu Dhabi.