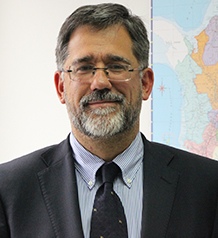 Pedro José Collado Gómez has a civil engineering degree from Universidad Politécnica de Madrid. He has been with the FCC since 1999 and has assumed several different responsibilities in the company. Before assuming his current role, he was Construction Manager for Central America and was in charge of the Civil Works Department. Currently, he is the responsible for business development and supervises construction projects.

Share on:
TBY talks to Pedro José Collado Gómez, President of FCC Colombia, on current projects, challenges in developing the country's infrastructure, and the future of Colombia.

What projects is FCC involved in throughout the country?

We have two projects; one is the new control tower for El Dorado International Airport and another building next to the tower, which is the civil aeronautics management building. The latter will control the airspace in Colombia along with another such center in Barranquilla. The control tower is a 90m high building, doubling the current size of the tower. Both projects are very important for the expansion of the airport. We expect to inaugurate the tower in November this year. The second project we currently handle is the flood control project of the Bogotá River for the Regional Autonomous Corporation of Cundinamarca. We dredged the river to an average of 2m and built a dike and small beach areas in order to control the growth of the rivers and avoid future floods. By doing this, we doubled the hydraulic capacity of the river from 100 cubic meters per second to 200 cubic meters per second. At the same time, this project also includes the development of natural areas along the river to compensate communities for the activity we currently carry out. This includes planting over 100,000 trees. We are talking about a $60 million to $70 million investment.
What is the importance of the 4G highway projects for Colombia?
As of October 2015, there have been almost 20 projects as part of the 4G tender waves and most of them need to be financially closed now. This is important also because in a year’s time the projects should be completed and the financial closing reassures parties of having the funding necessary for the construction of the projects. This is a common situation and we have seen projects being postponed for five or even 10 years already. This is bad, since the concessionaire also sees its terms postponed, and that limits part of the funding it counted on for the construction of the project.

What are some of the challenges the infrastructure development sector faces right now in Colombia?

Land availability and land property are some of the main issues right now. This also includes relationships with local communities and environmental licensing. At the same time, the country faces a challenge in terms of project and equity management. There should be a more common understanding of the importance of these projects, because the country needs them for its future development.

What are the main elements foreign companies should take into account when targeting projects in Colombia?

One of the main elements is to have foreign expertise in such projects, which FCC has with the main infrastructure projects we developed in Spain. Also, foreign companies require a local partner; a company that understands and knows the local market. In this context, it is very important to establish clear roles for both parties. Having said that, I think that PPPs have great potential here and have to be fully exploited.

What coming projects will FCC be participating in?

We will be actively participating in the Toyo Tunnel, the longest such infrastructure in the country at 9.8km, which has a budget of over COP1 trillion. The expansion of the Wastewater Treatment Plant of Salitre is another project and has a budget of more than $500 million. This project is publicly funded, The World Bank being one of the public organizations backing it.

How do you see FCC developing in Colombia in the next couple of years?

We want to consolidate our activity here with the two projects I mentioned. We know that over 85% of the infrastructure projects here require joint ventures and PPPs, meaning private investment. Our consolidation will come with our increasing participation in several of these projects. There is the third wave of 4G projects coming up soon and FCC will try to position itself as a key player for the development of some of these projects.