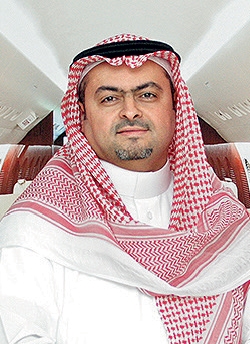 Faisal G. Kayal is the CEO of Saudia Private Aviation (SPA). He has a Master’s degree in Management Information Systems, and has an extensive background in global and regional marketing strategy. He is backed by experience through intensive aviation industry exposure in a series of increasingly senior positions at Saudi Arabian Airlines.

Share on:
How has Saudia Private Aviation (SPA) gone from being a part of Saudi Arabian Airlines to today being a separate company on the verge of privatization? Since the 1970s, there […]

How has Saudia Private Aviation (SPA) gone from being a part of Saudi Arabian Airlines to today being a separate company on the verge of privatization?

Since the 1970s, there has been a strong relationship between global GDP and the number of passengers. Our industry tends to automatically move in line with macroeconomic trends. The aviation industry worldwide contributes approximately 3.4% to average global GDP. And this is around the same ratio that the aviation industry contributes to Saudi Arabia. Obviously, the Middle East’s GDP growth is around 7.9%, most of which comes from Saudi Arabia and the Gulf countries in the Middle East. The industry employs roughly 300,000 people, directly or indirectly. The nice thing about our industry is the fact that it provides good jobs and a good quality of life for employees considering the fact that, with a high-school degree, you can be a co-pilot or an aircraft mechanic with a great starting salary. Basically, in terms of contribution to the economy, we generate about SAR53 billion ($14.13 billion) per year. Private aviation has become a part of these statistics. There were 15,700 private aircraft worldwide in 2010 and that figure is expected to double, reaching 30,000 aircraft by 2020. That is a CAGR worldwide of about 6.9%. In the Middle East, out of those 15,700, there are roughly 400 aircraft, and 60% of those 400 are linked to the Saudi market. In that regard, the Saudi market is considered to be a major player in private aviation. The private aviation business in Saudi Arabia consists of five key segments: the Royal Family, corporates, government officials, travel agents, and brokers. As far as privatization goes, we are one of the strategic business units of Saudi Arabian Airlines. The whole objective of having an investment business unit as part of the privatization project that took place at Saudi Arabian Airlines was to overhaul the company from an organizational and financial point of view, with the eventual objective of becoming fully efficient with a private company mentality. Eventually, we would like to go and participate in an IPO. SPA is not just a company, but the largest operator of Dassault Falcons in the region. At the same time, we have a good share of the domestic market via our small, six-seat aircraft. This aircraft addresses the dynamic lifestyle of the new businesspeople of Saudi Arabia.

How will the new airports coming online affect your business?

As a matter of fact, it will complement our strategy because, basically, infrastructure is considered to be the bread and butter of our business. SPA’s new fixed-base operator (FBO) in King Abdulaziz International Airport in Jeddah is a good example of this infrastructure. We have full-sized lounges and complete facilities that include a boutique hotel for flight crew. Infrastructure is a strong foundation for future growth. Likewise, the new King Abdulaziz International Airport, with all of its new facilities, will be positive for all the operators around the airport. Airports usually come with highway and transportation improvements, and we are going to take advantage of this improved accessibility.

I think our two successes are our customer satisfaction and the fact that we can meet our shareholders’ expectations from a commercial point of view. Success, for us, is being able to grow with the market, being able to compete, and being able to adapt to change. I think we have geared up with a lot of analysis and a lot of groundwork taking place over the past several months to come up with a strategic plan that will ensure our position in 2020. Our strategic plan counts on our ability to diversify our revenue avenues. That includes maintenance, repair, and operations (MRO); ground handling; expanding the charter business; aircraft management; and eventually providing elite shuttle services between key cities in Saudi Arabia and the region. That is very much in the pipeline at this stage, but it will be a semi-scheduled entity in the future.