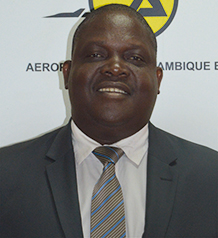 How would you describe the first year of operations of Nacala International Airport?

The first year registered low amounts of both aeronautical and non-aeronautical revenue because only one airline was operating domestic scheduled flights five times a week. The airport started receiving international traffic within the second half of December 2015. The passenger terminal at Nacala International Airport was awarded the African Property Awards for 2015/16. As this award was for the architects of the building, it seems that the architectural design of the building, and its comfort and functionality were the most important characteristics being considered. The facility’s architecture, design, and localization make this infrastructure unique in Africa.

Compared to other countries, the prices of domestic and international flights to and from Mozambique are relatively high. How can the ADM promote greater price competition?

Airport and air navigation charges are regulated and cannot be freely set by airports themselves. Regulation models vary from country to country. Our airline charges are not too high compared to other countries in the region. Landing charges and passenger charges are fairly reasonable, for example, but our security charges are considered relatively high. The structure of charges varies among airports. The ADM plays an important role in promoting competitiveness in terms of prices, and our main strategy is to create incentives for airlines and promote the introduction of low-cost carriers to our facilities. We recently announced an incentive scheme to encourage airlines to fly to/from Nacala International Airport. We also reduced charges for the use of passenger boarding bridges at Maputo Airport by 15%. We believe we can in the future increase the overall number of passengers and airlines operating scheduled routes to and from Maputo Airport, increase its attractiveness as well as motivate airlines to extend their operations. We also have an incentive scheme for the operational fees that apply to airport parking fees, landing, air navigation services, jet fuel, handling, and passenger catering. In order to promote the use of Nacala International Airport we propose reducing the tariffs currently in force, such as by 50% for Nacala routes to Nampula and Pemba, by 25% for regional routes to and Nacala-Addis Ababa and Nacala-Johannesburg-Nairobi, and by 25% for domestic routes in the “Ponte Aérea da Zona Norte” (Northern Region Airlift) scheme.

How will the depreciation of the metical change trade dynamics and the level of international cargo entering via air?

According to the expectations and traffic forecasts of Aeroportos de Moçambique, we expect an air traffic increase of about 8.5% in 2016 over 2015 due to the entry of new companies operating in our airports. They will partner with several economic sectors to achieve greater synergies and work closely with stakeholders to further increase passengers and cargo traffic. The Nacala Airport Cargo Terminal has great potential to boost economic growth. The cargo terminal is located in an economical special trade zone and agrizone and is also near a deep-sea port. The port is also set to become the country’s premier logistics platform, providing connectivity to several international destinations and access to local distribution networks. Several projects being conducted in Mozambique will provide a strong impetus to the air cargo sector.

As long as the airport is certified, it will work to win more traffic, particularly international routes. The coming year is expected to be one of reforms, with the gas, petrol, and agriculture megaprojects of gas, petrol, coal, and agriculture growing and bringing in increased investment and more exports. The opening of Nacala International Airport and the concentration of international traffic in the north of the country will propitiate a restructuring of flight routes, with more passengers and airline companies flying to Mozambique.