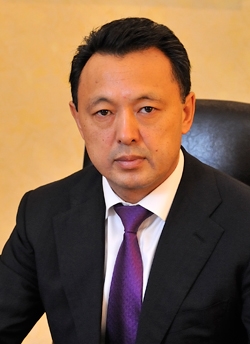 Foot on the Gas

President of the Management Board, KazMunayGas

Sauat Mynbayev was born in 1962 and graduated from Moscow State University with a degree in Economics in 1985. He later obtained a Master’s degree in 1988. From 2007 to 2010, he was the Minister of Energy and Mineral Resources, and in 2010 he was named as the head of the newly created Ministry of Oil and Gas.

Share on:
"Kazakhstan... aims to become a world leader in hydrocarbons exploration, extraction, and transportation."

Given Kazakhstan’s experience of the hydrocarbon sector, how is it set to strengthen its position as one of the global leaders in the market?

The oil and gas industry is not just one of the main sectors of the economy, it has been active for 50 years in Kazakhstan, which aims to become a world leader in hydrocarbons exploration, extraction, and transportation. KazMunayGas (KMG) is, therefore, particularly prominent in this sector. KMG Group is a national Kazakhstani operator representing government interests in the oil and gas industry. It is a vertically integrated oil and gas holding operating in line with international safety standards, and comprehensively oversees production processes from the exploration and extraction of hydrocarbons, to refining, processing, shipping, and special services. The company aims to rank in the top-30 oil and gas companies in the world in terms of oil reserves and production. We plan to increase liquid hydrocarbon deposits to 1.413 million tons and oil extraction to 35.4 million tons per annum by 2022.

What is the current KMG production status, and how are you planning to increase production in the future?

In 2013, KMG Group achieved most of its key targets. For example, oil and gas condensate extraction grew by 6% on the previous year to 22.6 million tons. Gas extraction has grown by 12% to 2.93 billion cubic meters. Approximately 67.2 million tons of oil were transported through the KazTransOil system over the period. In 2014, we plan to reach the 72.1 million ton mark. The major changes in the oil transportation sector resulted from the Caspian Pipeline Consortium’s decision to increase transportation capacity. The first stage of this project in Kazakhstan is expected to be completed in 2014. A project to increase the transportation capacity of the Atasu-Alashankou pipeline to 20 million tons per year will allow the transportation of both Kazakhstani and Russian oil to China across Kazakhstani territory. The construction of a third Asian pipeline has also begun, and will allow the supply of an additional 25 billion cubic meters (bcm) of gas through Kazakhstan to China. The construction of the Beineu-Bozoi-Shymkent (BBS) gas mainline started in September 2013, and is scheduled for completion by 2015. The estimated capacity of the BBS pipeline is 10 bcm a year. Currently, the volume of gas transported has reached 110,135 bcm (109,189 billion in 2012). There has been some growth in oil refining, too. KMG plants refined 16 million tons of oil in 2013, and this year the number will grow to 17.4 million tons. We have commenced the reconstruction of the Shymkent and Pavlodar refineries. We are also building an aromatic hydrocarbons (PAHs) production complex at the Atyrau oil refinery, and a bitumen production facility in the Mangistau region. Profits from core business activities have grown by 10% to KZT3.257 trillion. Overall, KMG’s net gain rose by 24% to KZT456.8 billion in 2013. KMG paid KZT622 billion in taxes and fees for the year (KZT599.4 billion in 2012). Production growth was underpinned by increased hydrocarbon reserves resulting from successful geological exploration. In 2013, the company concluded a four-year geological analysis of 15 sedimentary basins located in Kazakhstan. Recoverable reserves of liquid hydrocarbons were proven (in 2013) at 811.6 million tons. Production was 50% compensated for by the increase of commercial reserves to 11.5 million tons. In 2013, an exploration well was drilled in Zhambyl, and there is a deep-well being drilled in Urihtau. KMG links the further development of the hydrocarbons resource base with geologic exploration on the Caspian shelf and deep land sediments. In early 2013, after tentatively launching Kashagan, KMG and its partners announced recoverable commercial reserves discovered in two oil deposits in the Kazakhstani sector of the Caspian Sea. The growth of recoverable reserves reached 98.6 million tons, yielding a full 67.6 million tons in terms of the Kalamkas sea reserve and 31 million tons of oil at the Hazar reserve.

“Kazakhstan… aims to become a world leader in hydrocarbons exploration, extraction, and transportation.”

President Nazarbayev set a goal for Kazakhstan to become one of the world’s leading economies by 2050. What is the role of KMG in this strategy?

The President has set long-term priorities for the development of the oil and gas industry. In particular, increasing production efficiency through the use of innovative technologies and the expansion of the geological exploration of hydrocarbon reserves are focus areas. Through KMG’s status as a national gas and oil operator, the company will participate in these activities and set up a technological center named the Drilling and Production Institute, which will become a technological center. The institute will monitor geological and geophysical data and carry out laboratory research in geology, geophysics, and production technologies. Another priority is to increase hydrocarbon reserves through further geological exploration. The results of these studies were summarized in 2013 in an atlas of the potential oil and gas regions of Kazakhstan. The President has also set a goal of building a new (fourth) oil refinery. Meanwhile, the application of regulations will allow for a rebalancing of the remuneration system and ensure a stable workforce. Employees and their families are granted access to a social security benefits system that comprises financial assistance, social allowances, and other guarantees. In line with regulations, KMG employees are granted medical treatment in the event of a work accident, as well as maternity allowance, and other services.

Considering KMG’s leading position in the national energy sector, how will the company participate in World Expo 2017?

It is commonly acknowledged that energy-saving technologies are the future of the sector. All affiliated KMG Group companies apply eco-friendly, waste-reduction, and energy-saving technologies. For example, the implementation of the automatic electricity monitor and control system at the KazTransOil company has resulted in savings of 4 million kWh a year. The use of energy-saving technologies at the Pavlodar Oil Refinery has also allowed for a reduction of electricity consumption by 30.7 million kWh and thermal energy by 39,400 Gcal. Accordingly, specific energy consumption requirements to produce 1 ton of oil have declined by 7.7% and 6.7% for electricity and thermal energy, respectively. There is a gas turbine power plant under commission at the MangistauMunayGas Kalamkas deposit, the capacity of which is 2.45 MW. This natural gas fuelled plant will wholly compensate for increased electricity demand, resulting in cost reductions. Energy-saving practices have resulted in a continued declining trend in energy consumption.

What are your international ambitions for Kazakhstan’s oil and gas sector?

To date, the largest overseas asset of KMG is Rompetrol, operating in a number of European countries. Rompetrol utilizes the most innovative refinery in the Black Sea region and operates a network of over 1,000 gas stations. Through the purchase of a 75% stake in Rompetrol in 2007 and the remainder in 2009, KMG is following a strategy aimed at expanding key European markets with a potential 300 million customers. Simultaneously, Rompetrol has allowed for the creation of an integral well-to-customer cycle, involving the trading and shipping companies of the KMG Group. Our affiliated company, KazMorTransFlot, entered the oil transportation market through the Black Sea and Mediterranean Sea in 2012. Unfortunately, Europe’s oil refining and distribution sector is facing a crisis, as a result of which we have shifted our focus to the Romanian market.