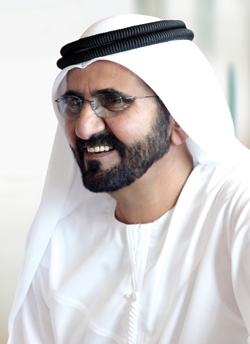 Foreword to The Business Year: Dubai 2014

His Highness Sheikh Mohammed Bin Rashid Al Maktoum is the UAE Vice-President and Prime Minister, and Ruler of Dubai.

In recent decades, the UAE has become a recognized leader regionally, and across the wider Middle East. The great progress of our cities is admired worldwide and held as a model for pro-active vision. This year, in particular, has seen the nation take significant steps forward on the path to playing a major role beyond the MENA region, in the global economy and society. In taking a leadership role across several frontiers, the UAE has remained true to its aspirations since the establishment of the Federation by our Founder President, the late Sheikh Zayed Bin Sultan Al Nahyan. The leadership and directives of His Highness Sheikh Khalifa Bin Zayed Al Nahyan, President of the UAE, continue to inspire the nation to look beyond the immediate to paint a canvas of exhilarating possibilities. Needless to say, much of the country’s achievement must be attributed to the energy, creativity, courage, and commitment of our people—all of which have propelled us into a new era that will script new pages in our history books, of new beginnings.

It is the extraordinary and collective efforts of our people that have contributed to Dubai’s success in being awarded the Expo 2020 this year by the 168-country members of the Bureau of International Expositions in Paris. Expo 2020 will celebrate the 50th anniversary of the UAE. Our theme for Expo 2020—Connecting Minds, Creating the Future—concisely sums up the UAE’s strategic objectives as a country, and our positive contributions to the people of the world. Dubai took another bold step in declaring its intent to shape the Emirate as the “global capital” of Islamic industry, economy, and finance. A date has been set to achieve this intent—three years from now. And, to help translate the aspiration by 2018, the Dubai Islamic Economy Development Centre (DIEDC) has been created with a mandate to guide partnerships between public and private sector entities engaged in this key domain. Even as we dream big, we remain cautious. We continue to adopt a prudent approach with regards to fiscal policies in our priority to ensure a secure tomorrow for the UAE’s people. In our determination to excel today and in our ambition to carry the success of our efforts well into the future, we are aware that we need to empower future generations with the skill, will, and motivation to perform. Guided by this conviction, we are working to build the best functional government and enabling education system befitting a 21st century destination country. As part of this priority, the UAE has announced its participation in the launch of a space expedition to Mars. We are indeed proud that we are the first Arab country to join a select group of eight other countries in the important scientific exploration of interplanetary space. Our unrivaled efforts towards technological advancement resulted in the launch of a two-year Smart Government Initiative earlier this year. The program has been designed to facilitate interaction with government offices through simplified applications on smart phones and tablet devices. Through m-Government, we now reach our people instead of their having to reach us, making their lives easier. With programs going back more than a decade, the UAE is currently ranked number one in the MENA region and second in the world in the Government Usage of ICT Index, released by the World Economic Forum. From being ranked the happiest country in the Arab world and securing 14th place, ahead of the US, Germany, and the UK according to a recent United Nations report to enhancing our record of sustainable initiatives and transparency, the country is today poised on a growth trajectory that is anticipated to attract more distinctions and stun the world. The run-up to the Dubai Expo 2020, and the ambitious strategic plans unveiled by individual emirates, as well as the Federation at large are certain to help the UAE repeat a feat that we have routinely accomplished throughout our illustrious history—to be the best.