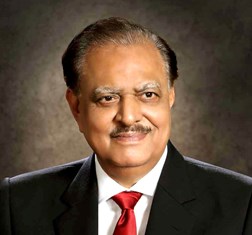 Mamnoon Hussain assumed the presidency in September 2013 as the 12th president of the country. He obtained his degree in commerce from the University of Karachi, after which he obtained his MBA from the Institute of Public Administration. He initially joined his family business and later started his own company in the textile industry. He also served as the President of the Karachi Chamber of Commerce and Industry.

Share on:
The positive impact of a forthcoming FTA between Pakistan and the GCC holds huge promise for both parties.

What are the most promising industries to deepen commercial ties between Saudi Arabia and Pakistan?

Pakistan and Saudi Arabia enjoy close bonds of friendship and brotherhood based on a shared faith, culture, values, and a commonality of perception on regional and international issues. There is huge potential to expand our economic and trade relations to bring them on par with the excellent political relations that already exist between the two countries. For example, Pakistan and Saudi Arabia have a Joint Ministerial Commission to further enhance their bilateral relations. A productive 11th session of the Pak-Saudi JMC was held in Islamabad in January 2018 and was attended by various ministries and departments from both countries. Cooperation in the mining and minerals, agriculture and livestock, dairy, petrochemical, labor, and tourism sectors can be further enhanced to the mutual benefit of both countries.

What economic effects would an FTA with the GCC have on the Pakistani economy, and where do talks stand on the issue?

The GCC holds a great importance for Pakistan due to our close fraternal tries, religious and cultural affinity, and the presence of our large community in the region. Pakistan has signed a Framework Agreement (FA) for economic cooperation with GCC countries. Negotiations for an FTA have also been initiated and are still in process. We look forward to an early conclusion of the FTA in a bid to step-up trade between the two sides. It will bring great opportunities of trade and investment to Pakistani businessmen and their GCC counterparts. The former hope that the country will have better opportunities to export rice, meat, and fruit, while GCC countries will have opportunities in the tourism, manufacturing, and services sector of Pakistan. Therefore, an FTA would not only have a positive impact on the Pakistani economy but also on the economies of GCC countries.

Crown Prince Mohammed bin Salman envisions strengthening the role of the Organization of Islamic Cooperation (OIC). What role will Pakistan-Saudi Arabia relations play in this process, and what would its economic component be?

Pakistan and Saudi Arabia, being important founding members of the OIC who share a common vision for the issues facing the Islamic ummah, have always played a pivotal role in forging unity and cooperation amongst member states. We are fully supportive of the Standing Committee for Economic and Commercial Cooperation of the Organization of the Islamic Cooperation (COMCEC), the main multilateral economic and commercial cooperation platform of the Islamic world. COMCEC addresses the common development problems of the Islamic ummah and provides solutions to them. Together with leading OIC members like Saudi Arabia, Pakistan has been providing support to the causes of the Islamic world in order to enhance intra-OIC socio-economic ties. Pakistan has also signed the Protocol on the Preferential Tariff Scheme for TPS-OIC, along with the Rules of Origin. This protocol promises a developed future of intra-OIC trade exploiting the potentials at all levels. Pakistan is also trying to highlight the importance of RTAs among the OIC member countries, which would enhance intra-OIC trade.

What are your hopes and expectations for Saudi Arabian-Pakistani relations in the near future, and what initiatives are pushing those forward today?

Pakistanis have a special place and reverence in their hearts for the Saudi leadership, the Custodian of the Two Holy Mosques, His Majesty King Salman bin Abdulaziz Al Saud, and His Highness Crown Prince Mohammed bin Salman bin Abdulaziz Al-Saud, Deputy Prime Minister and Minister of Defense. The relationship is also based on deep mutual trust and common aspirations of the people of the two countries, which is evident from a similarity of views on many regional and international issues. The two countries also support each other at various international organizations, including the UN and the OIC. Our relations are all encompassing, including strong security ties and robust economic relations. Both countries have much to gain from this relationship, as Saudi Arabia embarks on the implementation of Vision 2030.