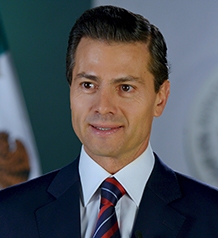 HE Enrique Peña Nieto holds a bachelor’s degree in law from Universidad Panamericana and a master’s degree in business from Monterrey Institute of Technology and Higher Education. Early in his career he held a number of positions within the State of Mexico’s government, including Sub-Secretary of the Interior, Administrative Secretary, President of the Directive Council of Social Security, President of the Internal Council of Health, and Vice-President of the National System for Integral Family Development. In 2003 he won the election as a State Deputy in his hometown of Atlacomulco. In 2005 he became Governor of the State of Mexico. He was sworn in as President of Mexico on December 1, 2012.

Share on:
TBY talks to Enrique Peña Nieto, President of Mexico, on the role trade agreements will play in strengthening bilateral trade.

President Santos visited Mexico in May 2015 and signed several agreements. In which specific areas did the two countries decide to collaborate and boost bilateral cooperation?

During the visit of President Santos to Mexico, we did in fact sign several agreements, the most important of which was the MoU for the Establishment of Strategic Relationship. Specifically, we signed academic and diplomatic cooperation agreements, as well as others in the fields of production linkages, tourism, higher education, and consumer protection. In addition, we identified areas where we can continue to cooperate, such as sanitary and phytosanitary regulation to facilitate trade between Colombia and Mexico. Other areas of cooperation include air transport, culture, student mobility, migration, and science and technology, particularly directed at the agricultural, environmental, and healthcare sectors. In the same vein, we reiterated our commitment to the consolidation of the Pacific Alliance.

What is the importance of the Pacific Alliance in connecting companies from these countries to the productive value chains?

The Pacific Alliance is at the same time both a valuable tool in the ongoing project of integration and trade liberalization in Latin America and an open and inclusive mechanism that provides a solid basis for cooperation between its members and its observer countries. Through this mechanism, companies in Colombia and Mexico, as well as Chile and Peru, are closer to each other thanks to the facilitation and unification of trade rules. In particular, the Pacific Alliance has a Working Group on SMEs, with the strategic objective of inserting them into global value chains. To this end, three major actions were promoted, namely the development of a collaborative study with the OECD to identify opportunities for SMEs in global production chains, the establishment of Network Business Development Centers that will start to work in 2016 in order to provide training and advice to SMEs and all entrepreneurs in the region, and the creation of the Venture Capital Fund, which will have an initial investment of $100 million and will start operating in 2017.

How has the FTA between Colombia and Mexico helped drive growth between the two countries?

The FTA signed in the 1990s has promoted significant trade growth between Colombia and Mexico. In 1994, we had bilateral trade of about $427 million. We have seen this figure grow by 1,300% to its current level of more than $5.7 billion. Colombia is now the second largest trading partner of Mexico in Latin America and the Caribbean. Among other products, we export cars, computers, transportation vehicles, iron, steel, plastics, and tractors into the Colombian market. We must not forget that the signing of the FTA was the original seed for one of our greatest successes, as it allowed us to forge in the Pacific Alliance one of the most dynamic and innovative mechanisms of cooperation in Latin America and the Caribbean.