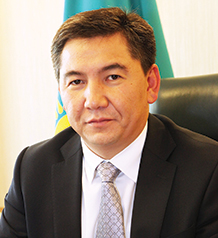 Minister, Education and Science of the Republic of Kazakhstan

HE Aslan Sarinzhipov graduated from the Kazakh State University of Economics, the University of Oklahoma (USA), and the Diplomatic Academy of Vienna (Austria). He undertook an internship with the John F. Kennedy School of Government at Harvard University. He has worked on the Executive Committee of the Intergovernmental Council of Central Asia, as a member of the Ministry of Foreign Affairs, and held the position of diplomatic attaché on economic issues in Washington DC. He later became a project coordinator in the Department of Infrastructure and the Development of Finance and Private Markets with the World Bank. In 2013 he was appointed Minister of Education and Science.

Share on:
TBY talks to HE Aslan Sarinzhipov, Minister of Education and Science of the Republic of Kazakhstan, on developments in the education sector, and encouraging scientific research and publication.

How would you evaluate the education sector of Kazakhstan?

Quality education is an important factor for economic growth and the development of the country; it enhances the country’s competitiveness on the global market. Today, Kazakhstan is leading several global rankings as one of the fastest-developing economies in the world. One of the acknowledged rankings of the wealthiest countries in the world—the Global Competitiveness Index (GCI), published annually by the World Economic Forum (WEF)—ranks countries by 28 statistical and 83 survey indicators; in the last five years we have seen how Kazakhstan’s status improved by 10 positions in education and science, according to the survey. The factors that contributed to the country’s higher position in the ranking was the start of a project for professional qualification improvement for teachers, based on the new three-level programs, as well as exceptional performance of our students at 32 international olympiads and science competitions, several important international science and math competitions held in Kazakhstan, and the introduction of dual qualifications in technical and professional education. The scientific progress in the country and increase of our position in the ranking was also determined by creation of intellectual clusters at Nazarbayev University and scientific and research departments in different universities, government support of 11 innovative universities, and introduction of new financial reforms.

How does education affect the development of the country’s economy?

Economic growth is determined by the level of preparedness and qualifications of the staff on all levels. As the president has pointed out several times, first and foremost we must develop a system to prepare competitive human resources, based on the partnership of the state and private sector. The Ministry has raised questions on the preparation of qualified staff at the highest level, during the parliamentary hearings, government meetings, international forums, and so forth. At the moment, we have reached some significant positive results in the system of technical and professional education. With the help of foreign experts and employers we have renewed the standards for prioritized specialties in technical and professional education. The system of higher education seeks a balance between economic demand and government contracts for the preparation of qualified specialists. We have created the map to supply production with qualified human resources in 14 industrial programs and projects.

What is your strategy for turning Kazakhstan into a center for research and science development in the CIS and Eurasian region?

Presently, the government of Kazakhstan is conducting work in order to enhance the potential of Kazakhstan’s science infrastructure, including the improvement of its reputation in the global market. The integration of science and education is one of the top priority questions for us. As a result of integration between scientific institutes and universities, their research potential will be enhanced, and the scientific potential of research institutes will be actively used in the preparation of human resources, and well as create a possibility to develop common scientific projects. In order to effectively integrate the scientific achievements of Kazakhstan into the global experience, we have opened access to global information resources of leading countries. In particular, we signed licenses and agreements with leading companies and publishers, such as Thomson Reuters (USA), Springer (Germany), and Elsevier (Netherlands). As a result of our work we have seen significant growth in publishing activity of Kazakhstan’s scientists—in 2012 we counted 803 publications, and in 2013 already 1602 publications. In the last 10 years, compared with 2003, we have increased the number of publications significantly. By 2020 we are planning to increase the number of publications to 3,000. Besides this, at the moment we are working on attracting new foreign scientists into Kazakhstan and returning our own specialists back to the country. Every year the number of young scientists is increasing.