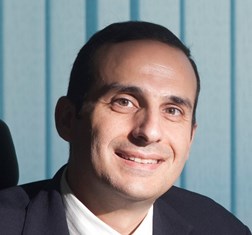 Franco Vigliotti obtained his MSc and PhD in condensed matter and laser physics in Lausanne in 2000. Simultaneously, he was an independent consultant for the Swiss cement industry, in the field of quality control, data analysis, and management. He is currently the Dean of EPFL Middle East.

Share on:
“That is the message—research is not a cost; it is an investment, and not only for those who put the investment down, but it also spills over into the economy.“

How did EPFL react to the challenges of the pandemic?

We do not have full-time students here; we only bring them in to do internships, master’s theses, and other research projects with companies or government entities. At the moment, all our work with companies is still online. We are starting an internship with a student who is working with a company in Abu Dhabi, and they are doing their internships online from Switzerland. Everything has gone online, even the work with our partners.

What does it mean for EPFL to have such an operation in Ras Al Khaimah?

In terms of quality control, we do not deliver diplomas in the Middle East; there is only one diploma, so the quality control is done in Switzerland. Students take courses and exams in Switzerland as part of our regular programs, and we only bring them here as part of their programs for internships, masters’ theses, and other research and innovation projects. The selection of students is also in Lucerne. We have had students from the best institutions in the world such as MIT and EPFL. They have an interest in the region and the experience, and approaching innovation in a different way and in different topics. From an academic point of view, the partnership offers topics of research in the postgraduate level. We do not offer anything at the undergraduate level. We mostly work with master’s students, and the cycles for research and projects are relatively short, around six months. They can move from one topic to another, so the richness of the experience has been to address topics that we cannot in Switzerland. One example is that when we first created the programs for RAK, we chose energy management and sustainability, because the UAE is already looking into post-oil economies and business models. We wanted to create a model to manage the energy transition from fossil fuels, and we created an entire program for this in 2010. In 2011, Fukushima happened, and quickly after that our own countries decided they would move away from nuclear and rethink the way they thought about energy. Sustainability suddenly became a central point of discussion and strategy for the government. When Switzerland decided it would phase out nuclear power, it essentially renounced 40% of our energy. Our experience here has helped us think about our path forward in Europe and find a new model.

What has been EPFL’s contribution to the development of RAK in the past 10 years?

EPFL is a federal institution, and we are committed to the development of the country and innovation in Switzerland, so we have adopted a similar approach here. We have worked not only in RAK, but also Dubai and Abu Dhabi. In RAK, we have been working in close collaboration with the municipality, and we have conducted 17 projects with them. We created and implemented a strategy of technology transfer in the field of waste management from 2015 to 2020. There has been a consistent effort to improve how RAK handles its waste with engineering and innovation. There is a great deal of wealth in waste if it can be sorted and given added value. With 17 students, we put together a comprehensive strategy that could potentially remove 98% of organic matter from the landfill, and at the same time generate up to USD20 million in revenue per year, simply based on the inventory of the waste and finding secondary markets for waste products. Part of this strategy has been implemented, and there has been over USD1 million of revenue from the waste. There is also a big project with cement factories and a waste management agency. Some students were hired by the government after they finished the program and created an agency and introduced the recycling of glass. There is also a project to use camel manure as a substitute for coal in the cement field. We worked with a Swiss investor to build one of the most sustainable buildings in the UAE, the Swiss International Science School of Dubai. We have worked with large companies such as ABB and Nestlé; for example, we helped Nestlé build its new factory next to the airport.

Are you planning on expanding your offer to other challenges in RAK like the application of technology to the level of SMEs or social sectors such as education or health?

We have finished the first phase of our partnership with the government of RAK, EPFL, and the Ministry of Education of the UAE to expand our areas to include infrastructure and apply our strategy. In a year, we could train around 30 new engineers and augment the footprint of this innovation effort that has been going on in RAK and perhaps also in the other Emirates.

There are a few things that drive us, such as seeing innovation flourish. One of the main drivers of innovation is the acquisition and development of talent; the core business of EPFL is to foster talent. Countries like Switzerland, the US, and the UK invest massively in their universities and in education in general. EPFL’s budget is approximately EUR1 billion a year, and around 65-70% is a direct grant from our government to develop education, research, and create innovation. In commercial terms, companies tend to wonder why the government invests in this way, and governments who do not invest probably wonder how they will be able to afford research. The answer is simple: if we look at the data from Switzerland, the US, Japan, South Korea, and the top innovators, the return on investment of federal money that goes into science and research is a factor of three over a period of five to 10 years. We have been able to see this in RAK. Between the government’s investment and our investment, the ROI in 10 years has been over a factor of three. That is the message—research is not a cost; it is an investment, and not only for those who put the investment down, but it also spills over into the economy. Research and innovation have to be at the center of any policy.