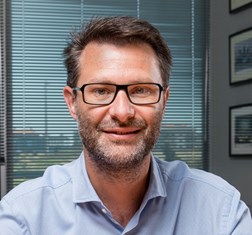 Fresh as a Daisy

With a bachelor’s from the University of Lyon and a master’s in economics from Sussex University, Crevola started his career at Renault in Portugal in 1994. Between 1996 and 2011, he served in different capacities in sales and marketing, including as executive assistant to the Vice-President of Group Renault for sales and marketing. In 2012, he became marketing director for Renault Poland and was later nominated marketing director for the East Europe Cluster. In 2014, he transferred to the South Cluster (Italy and Greece) and in 2017 was appointed general manager of Renault Portugal.

Share on:
Having created the automotive industry in Portugal in the late 1970s, with 21 uninteruppted years as market leader, Renault is showing no signs of atrophying.

What have been some of the key achievements of Renault in Portugal?

Having given birth to the automotive sector in Portugal, Renault has a strong history here. When the government decided to create an automotive industry in Portugal in 1977, Renault was chosen and built the first modern car manufacturing plant in the country, in Setubal, south of Lisbon. With this, we also created the entire ecosystem of the car industry in Portugal. At the time, Portugal was not a part of the EU, meaning we had a competitive advantage with tariffs. We rapidly grew a strong market share and built a strong dealership network. Since then, we have always had a larger presence than our competitors. When the market opened in the late 1980s, we lost our leadership (between 1992 and 1997) for a few years, but we were able to regain it in 1998 and never relinquished it again: Renault has been the market leader for 20 years in a row, and soon to be 21. Though we subsequently closed the Setubal plant, we still have an important plant in Cacia in the north, where we build gearboxes for the whole Renault-Nissan Alliance, some 700,000 a year with the help of 1,500 employees. This makes it the second most important automotive plant in Portugal. Renault has a full presence in Portugal with our plant, a national sales company, a financial services company, called RCI, and a retail company, Renault Retail Group, with facilities in Lisbon and Porto. We are leading in the market of personal and light commercial cars. Clio is the most sold car in Portugal and has maintained that status for six years since its launch in 2012. We currently have 22 dealers and almost 50 points throughout the country.

How do you assess the shift from conventional to electric vehicles?

It is a structural trend all over the world, but it is true that the Portuguese government has decided to push the electric ecosystem. The results are already impressive: Portugal is already the fourth electric market in Europe, accounting for 1.4% of total sales. We are ahead of most European countries, thanks to a tax incentive system for electric cars, especially for fleets. Renault ended 2017 as a strong leader in the electric market, with almost 50% of market share, ahead of even Nissan.

The Renault-Nissan Alliance dates to 1999. How is this relevant to Alliance 2022?

The Alliance was born almost 20 years ago, and still has room for more synergies. That starts with platforms and industrial parts. There are so many engines, gearboxes, and car platforms that we share with Nissan, Infiniti and, in the future, Mitsubishi, which recently joined the Alliance. What is key now is the capacity to invest in technology: We are in a changing world, mirrored in the automotive sector. Maybe the next 10 years will have more changes than the last 50. We are about to have a deep change with electric cars, autonomous drivers, and connected services. These new technologies require a lot of investments. We are pretty sure only the big players will be able to invest to continue to have the best offer. As such, the Alliance, now the largest carmaker in the world, is in a perfect position to do so.

What are your priorities for the coming year?

2019 will be a significant year for Renault Portugal because we are renewing important models. The most important will be Clio; later in the year will come Captur. We will launch the new generations in 2019. We are also talking about new technologies coming to the surface more quickly. There will also be a renewal of other brand pillars with new technologies, especially electric cars.