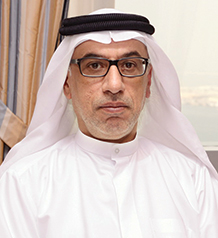 From Black to Green

Jasem Ali Al-Sayegh is a Chemical Engineer that graduated from the University of Washington. He joined ADNOC in 1986 where he assumed different challenging posts that greatly contributed in evolving the process engineering, operations, projects and HSE functions and management. He worked in several strategic expansion projects and gained valuable experience in technology handling and human resources management. After managing Ruwais Refinery for four years, he moved to the Company’s Headquarters in 2003 as Assistant General Manager (Technical). He then assumed the post of TAKREER General Manager in 2006. He contributed at a senior level to the local downstream oil industry by assuming the role of a Board Member of both Borouge and ADNOC Distribution for the last three years. In January 2012, he was appointed as TAKREER’s CEO.

Share on:
TBY talks to Jasem Ali Al-Sayegh, CEO of Abu Dhabi Oil Refining Company (TAKREER), on some of the targets and goals the company has established and the status of some of its projects.

What are the targets in place to achieve the “BIOjet Abu Dhabi: Flight Path to Sustainability” venture project with Etihad Airways, the Masdar Institute of Science and Technology, Boeing, and Total, and what is the expected timeline of this product?

This product is introducing a certain percentage of biofuel into jet fuel. Etihad Airways is planning this in preparation for the expected future worldwide regulation that jet fuel should be composed of a certain percentage of biofuel. TAKREER participated in this project by refining the biofuel at TAKREER Research Centre and bringing it to the specifications required that can be blended into regular jet fuel, which was used in a test flight by Etihad last January. The initiative is currently in the early stages and Masdar Institute is embarking on research to generate biofuel from crops that are inedible. We are continuing to work with Etihad and Masdar in this direction, because we see the biofuel production in the future as complementary to our efforts, in view of the expected increase in demand for jet fuel due to the rapid expansion of the aviation industry in the Emirates and the region.

In the UAE market, TAKREER has just begun distributing its new low-sulfur, environmentally friendly diesel fuel. What is the significance of this milestone for TAKREER?

This product falls in line with the sustainability efforts undertaken by ADNOC. We introduced this product, the Green Diesel, in the market in July 2014. All diesel types in the UAE meet now the Euro5 specifications, which is 10 parts per million (ppm) of sulfur. We are proud of being the first country in the region to introduce this sort of high-level product in the market. TAKREER was already ahead of its time two years ago, and in anticipation of the expected regulation we were able to start production after completing and commissioning the Green Diesel Project in Ruwais, which enabled us to convert all the diesel produced in our facilities into Green Diesel that meet the Euro5 specifications. This is important for us for obvious environmental reasons, and also to cope with the global market trend to go with low-sulfur diesel. We are happy to see such a regulation is enforced in our country. ADNOC had committed itself to meeting this regulation and invested in our facilities to ensure its smooth implementation. For the external market, we will be able to export this low-sulfur diesel to locations where it is required, whether in Europe or the Far East, which will give us a more competitive edge as it is a higher value product.