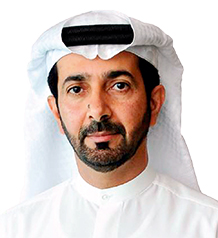 Governor, Central Bank of the UAE

Mubarak Rashed Al Mansoori was appointed Governor of Central Bank of the UAE in 2014. Other positions have included CEO of Emirates Investment Authority and Board Member at Etisalat, Abu Dhabi Securities Exchange, Mobily in KSA, and Abu Dhabi National Co. for Building Materials. He has a degree in finance and an MBA.

Share on:
TBY talks to Mubarak Rashed Al Mansoori, Governor of Central Bank of the UAE, on diversification, incentives, and fiscal discipline.

During 2016, oil prices witnessed constant rebounds, adding to better growth rate expectations for the UAE. How have these factors impacted the Central Bank’s expansionary policies for 2017?

As oil prices nearly doubled from the low levels reached early this year, the concerns that oil prices could fall to the low 20s turned out to be baseless, which was obviously great news for the UAE economic outlook. The Central Bank’s estimate is that non-oil activities will continue to grow by about 2.7-2.8% in 2016 and 2017, which is a respectable performance compared to global growth, notwithstanding the impact of the fall in oil receipts on our economy, which we are keen to contain going forward. The Central Bank remains determined to maintain its continued commitment to the fixed peg of the dirham’s exchange rate against the US dollar. However, we are keen to increase our capacity to manage liquidity to weather the impacts of external shocks, while adhering to the direction of US interest rate policy. Under these conditions, our focus is on the liquidity needs of banks with a forward-looking agenda. To that end, our research is currently focusing on the scope to activate the macro prudential instruments we have at our disposal and develop contingency plans to weather the adverse effects of global shocks on the domestic economy. This said, it could never be overstated that monetary instruments aim at managing liquidity to maintain resources for private sector activity. However, as experiences around the globe have demonstrated, available liquidity should be coordinated with fiscal and structural policies to boost investors’ confidence. The consortium of policies should be growth conducive to enhance our economic prospects to support the non-energy sector in the medium term.

How will the full economic diversification redesign fiscal and monetary policy when this target is met in 2021?

The UAE has been successful in diversifying its economy away from oil. Moreover, the strategies adopted by the UAE’s 2021 Vision, Abu Dhabi’s Economic Vision 2030, and Dubai’s Strategic Plan 2015 are all intended to attract foreign capital to promising activities, especially export-oriented sectors such as manufacturing, transport and logistics, tourism, telecommunications, renewable energies, and aviation. To support these activities, the government has played a leading role in infrastructure and regulatory developments that have boosted growth prospects in non-oil activities over time. To ensure sustainability in the wake of the recent decline of the oil price, the government has implemented necessary reforms to diversify fiscal revenues while reining in public expenditure in a gradual manner to increase fiscal sustainability. In parallel, policy coordination has necessitated diversifying sources of financing with a goal to reduce reliance on domestic liquidity and safeguard credit growth in support of private sector activity.

What are the main incentives the Central Bank currently offers commercial banks to further extend credit to this segment of the economy?

Supporting SMEs is a strategic decision taken by the federal government, which has been a priority in the wake of the oil price decline. The first step in this direction was the issuance of the SME Law in 2014, which led to the creation of the SME Council. The Ministry of Economy is taking the lead in this regard and is fully cooperating with us to promote this vital sector. In the particular case of the Central Bank, we are committed to playing a fundamental role in the capitalization of SMEs and startups. We set up a team whose main task is to make proposals on the ways and means the Central Bank could contribute to the implementation the SME Law, in coordination with the concerned stakeholders.

What action has the UAE taken to cut its deficit and how does a currency peg signal a positive outlook on the Emirati economy to investors?

We agree with the IMF on the need for fiscal discipline in order to maintain fiscal sustainability and ensure the stability of the fixed peg regime. In the UAE, the government of Abu Dhabi took the lead by reviewing water and energy prices in 2014, which reduced the subsidy burden on the fiscal budget. In August 2015, the federal government pressed ahead with the reform of the energy subsidy system, with the aim of aligning local energy prices to international levels, and improving the overall fiscal outlook of the UAE. Reining in the budget deficit requires actions on both the revenue and the spending sides. Reforms have focused on diversifying non-energy revenues. On the spending side, fiscal consolidation aims to strike a balance between growth priorities and ensuring sustainability. In this regard, the UAE could afford to pace fiscal consolidation gradually in light of available sources of financing, including financial buffers accumulated by the sovereign wealth funds. The ample international reserves the Central Bank relies on signify a solid background to our commitment to the stability of the exchange rate peg. Other GCC countries took similar actions albeit at varying degrees, therefore, we remain confident in our ability as GCC countries to keep the fixed peg regime.