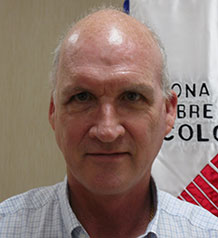 Born in 1958, Surse Pierpoint graduated from the Universidad de Carolina del Norte with a degree in Spanish and Latin American Literature in 1982, and obtained an MBA in International Management in 1984. He has been a member of the Board of Directors of the Colon Free Trade Zone Users’ Association since 1987. He has been General Manager of Colon Import & Export, SA for over 20 years, and is currently General Manager of the Colon Free Trade Zone.

Share on:
"Our desire as a free zone is to get containers off of the ship, into the free zone, and then resold to the region."

To what extent has the Colon Free Trade Zone (CFZ) been affected by the economic climate in the region?

We can directly relate our 10% fall in exports last year to what is happening in the region. Venezuela and Colombia are major commercial partners, and last year Venezuela went from representing 20% of our business to 6%. That has impacted our overall performance because it is a huge economy and it is hard to replace that type of volume. We won our case with the World Trade Organization (WTO) over the import tariffs that Colombia imposed on us. Colombia has exercised its right to appeal, however, so we are still waiting for a final decision on whether these restrictions on clothing and footwear, two of our most important commodities, will be lifted. We hope that we will see in the near future some change in both of these situations: a change in the economic situation of Venezuela, and a lifting of the trade restrictions in Colombia.

Do you believe the CFZ needs to reinvent its business model to adapt to the needs of MNCs?

We do not need to reinvent the business of buying and selling. What we do need to do is confirm what is happening in the region. The Minister of Finance has commissioned a bid for an internationally recognized firm to carry out a deep investigation into the situation and determine what needs to be done. We want to understand if we are lacking competitiveness, if the incentives that used to exist no longer function, or if the expenses are too high compared to other economic zones. We will not reinvent, but instead analyze and reorient as part of what we started doing last year, as well as traveling to different countries to promote the benefits of a regional distribution center to more multinational companies.

What is the CFZ’s role within the redevelopment of Colon City?

The Colon Puerto Libre project is trying to copy the success of what happened in Casco Viejo in Panama City where, as a result of the incentives, we see the American Trade Hotel in a building that was considered ready for demolition 10 years ago. The idea is to combine the incentives from a property perspective along with economic incentives, because we are aware of the attraction that the free zone represents to small and medium buyers, and the potential for creating a free port from a retail perspective is something that would act as a magnet for tourism. Through providing incentives for the rehabilitation of these old buildings, we could recover the former glory of Colon. Architects, urban planners, and other experts agree that Colon is a beautifully laid out city with a lot of historical value, and that it would attract a lot of tourism if it were properly developed. The role of the free zone is to serve as the warehouse for all of the stores that were set up in the city. The free zone administration will provide the IT platform for those companies that set up so that we can then provide the customs and tax authorities with proper tracking and tracing of the goods that go from the free zone to the stores and are then later sold as duty free shopping for both tourists as well as Panamanian citizens. The idea is that the wholesaler for goods like perfume, clothing, or electronics would be able to have a retail point of sale in the city, so that a three-story building would have a commercial storefront on the ground floor, offices on the second floor, and perhaps loft apartments on the third floor. That is the broad vision of what we would hope to accomplish.

Cuba has traditionally been an economic partner of the free zone; it has always purchased here, so we hope to see more of the small and medium entrepreneurs as well as the large trading companies able to arrive here with improved visa requirements. What we hope is that more people will result in more business. Any opportunity to bring more qualified buyers is always welcome.

How will the Panama Canal expansion impact the Free Trade Zone?

Approximately 90% of the inbound trade in the free zone moves by sea, and the expansion is oriented toward being able to handle larger container vessels. Our desire as a free zone is to get containers off of the ship, into the free zone, and then resold to the region. Expanding the canal means bigger boats, more containers, and greater opportunities for moving containers from ships into the free zone. We are excited because we also hope that this will open up possibilities for expanding our area of operation into the US. As those boats come through here and on to the east coast, there might be possibilities for companies interested in establishing a value adding operation here in the free zone for their goods before they get to stores in either the US or in our traditional area of operation. We have already had some visitors interested in exploring the new options that an expanding canal represents, such as certain companies interested in counter floats from the US to Asia, rather than from Asia to the US. Our challenge is to get in front of more multinationals to be able to present what is a compelling business case.

What is the government doing to ensure the benefits of the free zone are felt by everyone in Colon?

President Varela has a special connection with the province through both his wife, whose family member was one of the original founders of the free zone, as well as his own mother, who was a teacher here. His aim is to leave Colon better than it was when he became President. Our role is to support this project, so we have donated an area of land for the building of 5,000 homes, creating a new suburb that is expected to have over 20,000 residents once completed. The renovation of Colon City is an ambitious project, with overall investments estimated at around $700 million. This is a huge undertaking, aimed at improving the life of many of the current residents of the city who are living in inhumane conditions because of a lack of investment and the state of the old buildings in which they are currently living.

With the spotlight on Panama because of the inauguration of the expansion, there will be a lot of multinational companies interested in coming to explore the opportunities. We are hoping that a few of those companies will come to Colon on our new four-lane highway and visit the free zone.